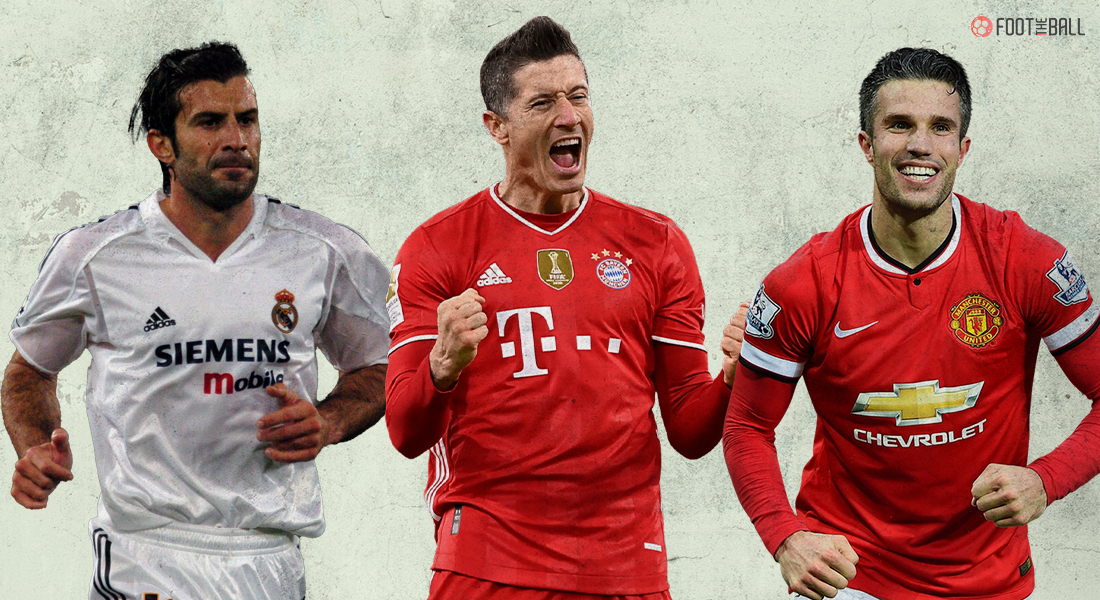 A summer transfer window that no one can forget, the 2021 transfer market has witnessed an enormous reorganizing of teams. And with players switching clubs it was quite evident that Portuguese striker Cristiano Ronaldo would also express his desire to leave Juventus and try a fresh challenge somewhere else. Certain reports have suggested that Ronaldo had approached Manchester City for the transfer, leaving the Red Devils’ fans fuming across the town.

Although Ronaldo hasn’t made the switch, it’s not the first time in European football that a player has donned the shirt of a rival team. From Luis Figo’s controversial transfer to Los Blancos to Robin Van Persie’s switch to the Red Devils, we at FootTheBall take a look at 10 players who made shocking moves to rival teams.

A Portuguese legend, Luis Figo paved the way for the likes of Cristiano Ronaldo and Bruno Fernandes to take the Selecao to greater heights in the modern era. But at club level, the midfielder received immense hatred for a few decisions he undertook in his glittering career. In 2000, Figo made the unacceptable switch to Real Madrid from Spanish rivals FC Barcelona.

Becoming Perez’s first signing of the Galactico Gang, Figo’s transfer wasn’t taken quite well by the spectators at Camp Nou. When the Portuguese returned to Barcelona donning the whites of Madrid, he was welcomed cruelly, with a pig’s head being thrown at Figo. The spectators decorated the pitch with violence demonstrating their hatred for the transfer. Nevertheless, Figo captured the La Liga twice and also won the Champions League with Los Blancos.

In 2011-12 the Red Devils missed out on the English title on goal difference, demolishing months of hard work under Sir Alex Ferguson. But the Scottish mastermind was quick in finding the missing piece for his glorious team. He purchased Arsenal’s Dutch striker Robin Van Persie for 24 million pounds as the Flying Dutchman made the famous switch to Old Trafford.

And after his arrival, the Red Devils became an unstoppable force, winning the Premier League. He finished off the campaign with the Premier League Golden Boot, securing the title with a hattrick against Aston Villa including that volley. The forward started against the Gunners six times and bagged a goal on three occasions, fueling Arsenal fans’ every time he visited the Emirates.

When Robert Lewandowski went to German rivals Bayern Munich by Borussia Dortmund following in the footsteps of Mario Gotze, the world questioned whether BVB’s days at the top were over. Considering the prolific business Dortmund pull-off in the summer window, his free transfer was a hammer blow to the ambitions of BVB. And the Polish striker stepped his game to another level since his arrival at Allianz Arena.

Breaking Gerd Muller’s record last season, a magnificent treble two seasons ago, and winning the German title almost every season, Lewandowski’s performance hurt Dortmund fans’ almost every time. In the recently concluded DFL Super Cup, Robert Lewandowski bagged a brace and once again came back to haunt the silverware ambitions of the club that made him.

A transfer that erupted the ‘billboard wars’ between two clubs, Carlos Tevez was purchased by the blue parts of Manchester from the red locations in 2009. But the Argentine’s switch fumed the two sides of Manchester leading to fan wars between the two teams.

This came after Tevez had expressed public displeasure at the city of Manchester stating a desire to leave. When Tevez departed for the Etihad a huge billboard featured outside the stadium reading ‘Welcome To Manchester’.

The board was at Deansgate as the Cityzens took a dig at the Red Devils’ Old Trafford situated in the neighbouring city of Stratford. But Manchester United had the last laugh as Tevez’s disciplinary issues saw the Argentine being constantly dropped to the bench. And the Red Devils’ spectators established another sarcastic billboard just next to City’s advertisement that read ‘Welcome To Carlos’.

Switching between North London clubs isn’t taken well by English fans especially considering the rivalry existing between the clubs. The English defender stamped his authority at White Hart Lane becoming a brick wall in Spurs’ defence. But after his contract ended with Tottenham, Campbell decided to pack his bags and move next door wearing Gunner’s outfit.

Sol Campbell says it's "ridiculous" he still gets abuse from Tottenham fans over Arsenal move as he opens up to talkSPORT in new documentary https://t.co/NB1Lcabj4y

The defenders’ free transfer was agreed, way before its announcement arrived. Campbell and Tottenham sealed their lips considering the eruption it would create in North London. When Sol Campbell announced his arrival at the Emirates, only a couple of reporters were present at the conference.

Interestingly the two of them weren’t aware of Cambell’s arrival and assumed it to be the announcement of Ipswich Town goalkeeper Richard Wright. He expected the Spurs’ fans to respect his decision which they famously didn’t.

Once Cristiano Ronaldo was asked if the talismanic Portuguese feared any defender and the former United winger replied Ashley Cole. Ronaldo’s nightmare Cole was bestowed with controversies when the defensive wall made the controversial North London switch. After parting ways with the Gunners, Cole joined the Blues and became a rock in Chelsea’s backline.

But what enraged Gunner’s spectators were Cole’s explanation in his autobiography which was that Arsenal’s offer for his contract extension was too low. He said he ‘nearly crashed the car’ on hearing the offer from his agent.

The defender was jokingly re-named ‘Cashley’ by the audience at the Emirates once the Blues agreed to increase his salary at the club and when he faced his former team, he was flooded with a plethora of fake banknotes. Leaving everything aside Cole performed extremely well for Chelsea winning the Champions League with the Blues.

Well, it was almost impossible to hate one of the greatest players existing in world football. The inventor of ‘Total Football’, the legacy left by Dutch player Johan Cruyff still resonates throughout world football. But once even Johan Cruyff shattered the hearts of a billion Ajax fans when he switched to rivals Feyenoord.

🔙 #OTD in 1984, Johan played his last career football match ever, winning the Eredivisie with Feyenoord.

Breaking up with Ajax’s management, Cruyff needed a fresh challenge but no one thought it would arrive in the Dutch league itself. And the magician revamped Feyenoord with his arrival as the sleeping giants were uplifted by Cruyff’s presence in their eleven. Failing to win trophies, Feyenoord managed to win the Eredivisie in his debut season at the Dutch club.

The anathema to the word loyalty, Swedish striker Zlatan Ibrahimovic has made some controversial switches throughout the club. He has crossed the enemy line thrice in his career switching from Juventus to Inter first and then transferring to AC Milan to add fuel to fire.

After Juventus were illegally caught in a match-fixing scandal the club was dumped to the second division in Italian football. And although Zlatan’s teammates pledged to stay at the club, the self-proclaimed king had other plans as he decided to transfer to Inter.

He threatened to take legal action if his departure was blocked in any way. After his Italian challenge, he went to Barcelona to compete in La Liga. Later in his career, he returned to Italy but ditched both his former clubs, joining hands with AC Milan, a move that caused major uproar throughout Europe.

A crucial part of Johan Cruyff’s legendary ‘Dream Team’ at Barcelona, Michael Laudrup was one of the players who crossed the Spanish border to join hands with Los Blancos. Regarded as one of the best Danish midfielders, Laudrup won the La Liga 5 times in a row, four of them came with the Blaugrana while his last one came with Real Madrid.

Laudrup had to, unfortunately, leave the club after Barcelona purchased Romaria taking their catalogue of foreign players over the permitted mark of three players. Interestingly both sets of fans showed no hatred towards the Danish player as he was loved by spectators at both Camp Nou and Santiago Bernabeu.

One of the biggest derbies in world football, the Old Firm Derby sits right at the top with the likes of El Classico and Manchester Derby. A contest between two Glasgow based Scottish outfits, Celtic and Rangers give it their all to win the competition and defeat their rivals. One player who risked it all to play for both clubs was Scottish footballer Maurice Johnston.

The striker first wore the green and white outfit of Celtic and then went on to put on Rangers’ blue shirt. The Light Blues had a no-catholic policy when signing players but they broke it to capture Johnston’s signature. It was reported that Johnston was about to join Celtic but Graeme Souness convinced him to join Rangers. The striker was also paid heavily by the Teddy Bears, something Celtic couldn’t afford.