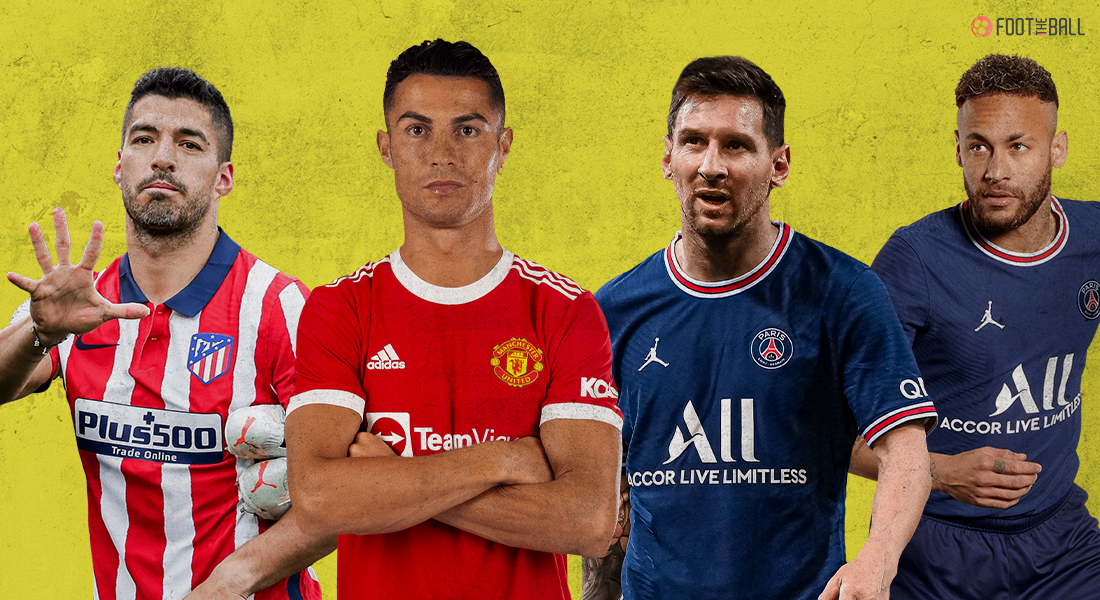 The recently concluded transfer window saw clubs spending millions to buy their preferred targets. While some players agreed to join teams for free the other clubs had to sign hefty cheques for the services of their newly purchased footballers.

But even after the shuffling of the pack a few names have a massive weekly package that they receive from their teams as they march into the list of highest-paid footballers.

While Gareth Bale earned an unbelievable amount while just sitting at Madrid’s bench, Cristiano Ronaldo had to agree on a pay-cut to join Manchester United. We at FootTheBall review who are the highest-paid footballers in the world in the current generation.

The highest-paid football player on this planet, La Pulga has added a hefty amount to PSG’s wage bills. Lionel Messi transferred to the Parisians in a jaw-dropping transfer window after the Catalans failed to register their star player.

And after spending a couple of decades at his beloved club, the Argentine was forced to find himself a new club because of La Liga’s strict financial rules. And the team who purchased Messi was PSG as the French outfit look to win their long eluding Champions League trophy.  And although Messi was signed for free by PSG, the talismanic forward earns around 500,000 pounds per week.

Another South American player from PSG marches into the list of the highest-paid footballers with Neymar finding himself a fresh spot. Cristiano Ronaldo’s departure to Old Trafford at reduced wages meant that Neymar displaced the Portuguese.

The global star earns around 836,000 dollars per week for playing for the Parisians. Now with Messi being the latest addition to PSG’s glittering roster, the Brazilian would like to capture the European throne once again. Neymar also earns a great amount from his sponsorship deals with different companies.

Astonishingly Uruguayan striker Luis Suarez is third on the list of highest-paid footballers. The former Barcelona forward was pushed out of the club after he was deemed too old to feature at the Camp Nou. But like a wounded but dangerous lion, Suarez roared when he switched to Atletico Madrid.

Diego Simeone and Atletico Madrid re-captured their star-striker Antoinne Griezmann on the deadline day of this season’s summer window. The French forward couldn’t prove himself at the Camp Nou and became a secondary to the newly-purchased Memphis Depay.

While the huge amount associated with the Frenchman saw Barcelona get rid of Griezmann because he pocketed huge wages at Barcelona.

The Frenchman earned around 730,000 dollars per week that put him on the list of highest-paid footballers. And although Griezmann switched back to his former club, it’s expected that he would earn somewhere around the same figure at the Wanda Metropolitano.

Welsh forward Gareth Bale might be one of the luckiest footballers on the planet. Until last season Bale pocketed almost 690,000 dollars per week to just sit on Real Madrid’s bench. He fell out of Zidane’s roadmap for the season and even when Los Blancos struggled, Zidane continued to bench Gareth Bale.

But after spending a loan tenure at Premier League giants Tottenham Hotspurs, Bale proved that he’s no way near finished. In the recently concluded Euros, Gareth Bale carried his nation on his shoulders producing marvellous performances throughout the group stages. Now back in Spain, Carlo Ancelloti and Gareth Bale have joined hands to bring back Real Madrid’s glory days.

The third PSG player on the list, Kylian Mbappe completes Parc Des Princess glorious forward line. Purchased by the Parisians at a record amount, Mbappe has been scintillating during his stint at the club. Although many pundits believed that PSG might be selling Mbappe to Real Madrid, the move was thrown out of the window during the last weeks of the summer window.

The 22-year-old earns a whopping sum of 566,000 dollars per week for his services. A constant performer, Mbappe could be a part of the list for ages considering the talent he has.

Pushed back from the second position to the seventh position, Cristiano Ronaldo’s reunion with Manchester United cost him a few pounds. The scintillating forward had to reduce his wages to force a switch to Old Trafford after he had expressed his desire to leave his former club Juventus.

Although sitting behind some big names in this list, Ronaldo’s sponsorship deals are jaw-dropping. According to Forbes, the Portuguese earned 45 million us dollars per year from his sponsorship deals. Back in the Premier League, the forward earns the most amount of money in England along with Belgium midfielder Kevin De Bruyne.

Tied with Cristiano Ronaldo at the top of the highest-paid English footballers, Belgium playmaker Kevin De Bruyne has a hefty price tag along with his name. And why not, the Belgian has been influential for the Citizens scoring thunderous goals and providing marvellous assists.

De Bruyne has captured the Engish title thrice with the Manchester club in his six years at the club. A Chelsea reject, the midfielder has become a crucial piece for Pep Guardiola’s puzzle.

The only goal-keeper on the list, David De Gea sneaked his way into the catalogue of highest-paid footballers. The Red Devils shot-stopper was benched after Dean Henderson emerged as Ole Gunnar Solsjkaer’s choice last summer.

But Henderson’s questionable performances and De Gea’s Europa League heroics saw him fall back into the eleven. In the three games, this season the Spanish goalkeeper has just conceded twice helping United grab crucial points. With 517,000 dollars per week, De Gea is the highest-paid Spanish footballer.

A name that could be above some of the other names in the list, Polish striker Robert Lewandowski is worth every penny that the Bavarians spend on him. Earning 483,000 dollars per week, Lewandowski is the last member of the top-10 list of highest-paid footballers.

FIFA Men’s Player of The Year, Bundesliga’s Top Scorer, and the front-runner to win the 2020 Ballon D’or, the Polish international is a goal-scoring machine. Last season he also broke Gerd Muller’s long-standing record of 40 goals in a season, scoring one extra than the veteran German.