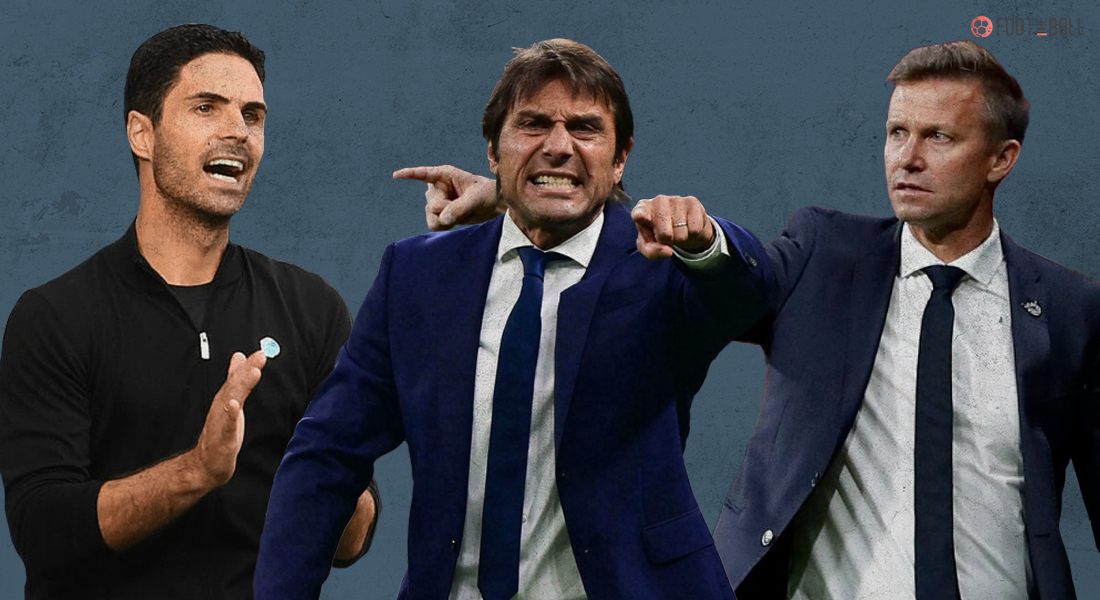 With the European league season having gotten underway, one heralded name is conspicuously absent. Antonio Conte is not in any hot seat as he has been so often in the past and successfully too.

The former Inter Milan manager, who left the Nerazzurri over differences regarding the club’s future and finances, has a tendency to only take projects where he can succeed on his own terms.

Full story on his appointment as Inter manager 👉 https://t.co/CKiokaSrbZ pic.twitter.com/gboUNmZL48

Nevertheless, with certain clubs not starting the campaign as one might have hoped, FootTheBall looks at 5 destinations that would suit the Italian and his tactics perfectly.

This one is kind of a no-brainer, both for their dastardly start and the effective players they have for Conte’s system. The Gunners spent close to £150 million on six young players who would all get substantial game time under the Italian.

Ben White could become the next Alessandro Bastoni, Martin Odegaard the next Nico Barella while Kieran Tierney is one of the best at his job. The main concern might be who will be the two partners of White in the three-man backline. Gabriel will likely be one given how he looked the most solid last season while the final slot might go to Rob Holding.

Man of the match. pic.twitter.com/cuKxo7ICgQ

Conte’s passion will certainly match up with that of Granit Xhaka and in Pierre-Emerick Aubameyang, they have the perfect goal scorer when played centrally. Nicolas Pepe does not embody the same spirit as Conte would like in his players but Emile Smith-Rowe has a good chance of showing his capabilities.

Coming back to the full-backs who play such a crucial role, Tierney has been one of the most outstanding on both sides of the pitch. He has the most shot-creating actions (12) as well as the second-most passes attempted (125). Odegaard has time on his side and under Conte can develop into one of the league’s finest attackers.

The fallen giants of France who are just in need of a resuscitator like Conte. If there is one manager who can rival the ambitions of PSG, it is the Italian who just did it last season with Inter.

⭐ Lucas Paqueta scored twice and provided one assist in Lyon's 5-2 win at Nimes last night to become the sixth player to garner a perfect WhoScored 10 rating in a @Ligue1_ENG match this season pic.twitter.com/fivYcQitQc

Lyon have started the season falteringly under new coach Peter Bosz, but have the pieces which can turn the team into contenders, both now and in the future. Houssem Aouar and Bruno Guimaraes are two of the finest young midfielders in Europe currently.

The Frenchman is averaging 3.75 shot-creating actions P90 along with 3.25 shots on target P90 while the Brazilian’s box-to-box energy is a major bonus.

Moussa Dembele has already hit three goals while 18-year-old Rayan Cherki is a precocious talent who has been limited to just one appearance so far. The defensive solidity of Lyon will be an area of concern but loan signing Emerson is a valuable addition to Conte’s preferred system.

🥇2 goals
🥇3 shots, all on target
🥇100% passing accuracy in the opponent half
🥇9 duels, highest tally for Lyon

Furthermore, Xherdan Shaqiri is a solid role player who excels at his job and is committed to the cause no matter the time spent playing.

Though Conte is very unlikely to join a club of Frankfurt’s stature, he can do a mammoth job of turning them into a mainstay of European football. Another new manager, another poor start.

Two draws and one heavy loss has made the fans feel last season’s 5th-placed finish was a lifetime ago. To be fair, the loss of top goal scorer Andre Silva was never going to help but they do have a pretty good squad. The most exciting addition has been 21-year-old winger Jens Petter Hauge, on loan from AC Milan. He already has two goals and is taking 3.09 shots on target P90 so far.

Out of every U23 football player in Europe's Top 5 leagues last season (20/21), Daichi Kamada had the most assists and the joint-4th most overall (12). 🇯🇵🎨 pic.twitter.com/OHlTmJqcew

Furthermore, he also has 3.53 shot-creating actions P90 and can function well with Rafael Borre. The controversy surrounding Filip Kostic and his “failed” transfer to Lazio may leave Conte without a star attacker but the potential of Hauge is scary.

Daichi Kamada is a solid ballplayer in the middle while Martin Hinteregger and Makoto Hasebe will provide leadership qualities. Erik Durm is a fine attacking wingback who has shades of Achraf Hakimi, a player whom Conte made into a star.

First things first, the Blaugrana do not have the financial means to spend on the squad as Conte likes. Their transfer business this season has been less than stellar while some of the current crop have hardly justified their transfer fees.

Nevertheless, they have 11-15 players who are a great mix of experience and youthful exuberance who know what they are doing. Pedri had a standout 2020-21 and excelled with Spain in the summer, having already become a key figure. Sergio Busquets has enough life in his legs to disrupt opposition attacks and cover the backline while their full-backs love getting forward at every opportunity.

The return of Ansu Fati will be a big boost and Conte can turn the Spaniard into a world-class player very soon. He will have Memphis Depay to learn from who has started the season like a house on fire.

The Dutch striker has the uncanny ability to play all across the forward line, much like Romelu Lukaku, and is able to drive at defenders with ease. Getting the best out of his players is Conte’s forte and there is no doubt that someone needs to do that for Barcelona this season.

The title race will not be easy and in their quest to reduce wages, they have also sent Antoine Griezmann to a rival. Frenkie de Jong is an excellent ball player, and though he might not be as action-packed as Conte likes, his sharp passing (92.3% success so far) will hold the key in unlocking defences.

It has not been a good offseason for the German club. Not only did they lose their manager to closest rivals Bayern Munich, they have also had to let go of solid defender Dayot Upamecano and captain Marcel Sabitzer to the same rival while also selling Ibrahima Konate to Liverpool.

All of it combined with an indifferent start to the league season has immediately put pressure on Jesse Marsch. However, the American still has a squad that can comfortably finish in the top-three as well as making strides in Europe.

Bringing in Conte might just further tip the scales in their favour. Not only can Leipzig spend well, but they also have a whole host of exciting players who are itching to make their mark.

Nordi Mukiele is one of the most coveted fullbacks in Europe and along with Angelino, can serve as a thorough outlet for counter-attacks. Emil Forsberg and Kevin Kampl are two steady presences in midfield that Conte can use in both attack and while stopping the opposition from advancing. Their main strengths though remain the attacking riches.

New signing Dominik Szoboszlai along with Christopher Nkunku have ran amok when their team is on the front foot, creating 7.22 and 6.15 shot-creating actions P90 respectively. Nkunku has also had his hand in four goal-creating actions, all signs which indicate how much his dynamism will be appreciated by Conte. Andre Silva is really yet to start firing but the Italian manager is certainly known for turning around a striker’s lean patch.