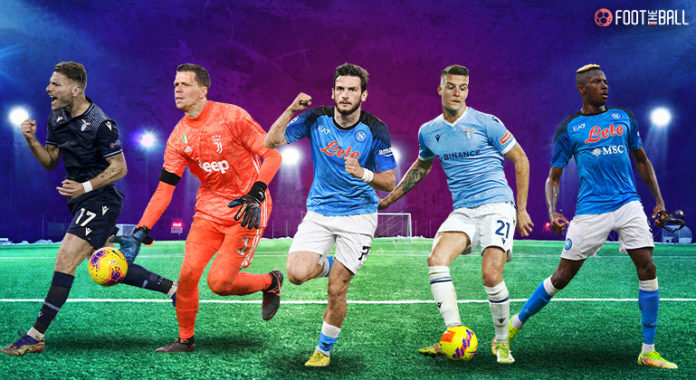 After having one of the closest title races in years last year, the Serie A is again gearing up for an intense fight for the trophy yet again. Napoli, AC Milan, Inter Milan and Juventus all look like favourites to add the Serie A trophy to their cabinet.

Napoli currently lead the race five points ahead of AC Milan, with Inter Milan and Juventus wrapping up the top four. However, other teams such as Lazio, AS Roma and Atalanta are waiting in the wings to take advantage of any drop in form for the top four teams.

Among the top four, Inter Milan, Napoli, and AC Milan also have qualified for the Round 16 of the Champions League.

And we bring you the stats from an incredible Serie A season.

Victor Osimhen: Victor Osimhen has been a wise investment for Napoli and has scored 24 goals and provided five assists over the last two seasons. And he has kept up his form this season. The Nigerian has currently scored 13 goals, the most by any player in the league. His goals have helped Napoli climb to the top spot, and after their 5-1 win over Juventus, they look certain to win their first title since 1989-90.

Ademola Lookman: Atalanta are right in the middle of an intense race in Serie A for the Champions League spots. And Ademola Lookman has taken all the scoring responsibilities scoring 11 goals, including a brace in the latest match against Juventus to help Atalanta climb up to fifth, two points adrift of AS Roma in fourth.

MBala Nzola: After an abysmal last season in which he suffered from injuries, MBala Nzola returned with a vengeance. The Angolan had only scored two goals in the previous season but is already up to nine goals this season. This is more than 50 per cent of his team’s goals. His team Spezia is currently 15th in the league table, six points above the relegation zone.

Marko Arnautovic: The Austrian is experiencing a rich vein of form this season. After scoring 14 goals in his debut season, Marko Arnautovic is already up to eight goals. The striker has scored at more than one-third of his team’s goals, which is why they are so far above the relegation zone.

Lautaro Martinez: The Inter Milan man is having an underwhelming season by his standards. However, even then, he has scored eight goals, with the latest coming in a 2-2 draw away to Monza. With Romelu Lukaku returning after a lengthy injury spell, Martinez’s spot in the starting XI is in danger unless he continues to find the back of the net.

38 – Victor Osimhen has scored a goal every 38 touches on average in Serie A in 2022 (18 goals and 690 touches); the best ratio among players with at least 25 touches in this period. Midas.#OptaTopXI #SerieA

Khvicha Kvaratskhelia:  By the end of his career, 21-year-old Khvicha Kvaratskhelia will indeed become the best footballer to come out of Georgia. The attacker joined Napoli in the summer and has immediately made an impact providing seven assists and scoring six goals playing a key role in Napoli’s 5-1 win over Juventus.

Gerard Deulofeu: The former Barcelona man had a stellar last season scoring 13 goals and providing five assists. This season while his goals have dried up, he has provided six assists becoming the chief creator for Udinese.

Mario Rui: The Portuguese is having the best season of his life, racking up six assists, one less than his best-ever tally for Napoli. His up-and-down runs on the left flank have created havoc on the opposition, and no full-back has had more assists in the league than Mario Rui.

Piotr Zielinski: When you have three players among the top five assist providers, you are bound to be on the top of the league table. Piotr Zielinski is the third Napoli man to have five assists. With 22 games to go, he has already equalled his previous season’s tally.

Ivan Provedel: The Lazio man has been by far the best goalkeeper in Serie A, with 10 clean sheets in 17 matches. This has helped Lazio become the third-best defence in the Serie A and helped them stay in the race for the Champions League spots.

Wojciech Szczesny: Before the match against Napoli, Juventus had conceded only seven goals this season, making the second-best record in the top five leagues after Barcelona. And Wojciech Szczesny has been one of the critical reasons for this brilliant defensive record. The Pole has only played 11 matches but has kept eight clean sheets helping Juventus climb up to the second spot. Even after their defeat to Napoli, they still are the best defence in Serie A.

Alex Meret: League leaders Napoli’s goalkeeper Alex Meret has also been in fine form this season. Meret has helped his team keep eight clean sheets conceding only 14 goals, the least in the entire league. This has helped Napoli win crucial points and build a healthy lead at the top of the table.

Rui Patricio: AS Roma have scored the least goals among the top eight teams in Serie A. However, heroics from Rui Patricio have ensured that Roma are level on points with third-placed Inter Milan. Patricio has kept seven clean sheets till now.