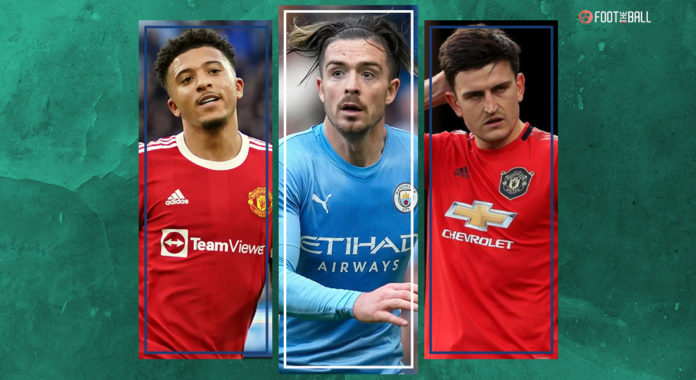 England have produced many top footballers over the years, some of whom have gone on to become legends of the game, from George Best to David Beckham. This is down to their talent, quality and the fact that they have proven themselves in the Premier League. These days, talented footballers often cost a fortune for clubs to buy, which has repeatedly seen these players become one of the most expensive footballers in the world.

Out of the many players in England’s top-flight, a few have made sure that their quality forces clubs into spending the money that their services deserve. FootTheBall look at the 10 most expensive English footballers of all time.

Also read: Most expensive Brazilian footballers of all time

Not often would you see a player’s name appear twice on a list for most expensive transfers. And if you do that means the player has been performing exceptionally. Raheem Sterling has been quite on a journey in England, from Liverpool to Manchester City and now Chelsea.

The English winger moved to Manchester City in 2015 for a then-record club fee of £50m. After a trophy-laden career at the Etihad stadium, the club deemed the former Anfield prodigy surplus to requirements. Although, Sterling’s legacy without a doubt will be etched in Manchester City’s history after making 225 appearances for the Sky Blues and scoring 91 goals in the process.

With Sterling’s departure, how will Pep Guardiola set his team up with Erling Haaland?

A player blessed with explosive pace and an endless tank of stamina, Walker became hot property after impressing with Tottenham. Still, it was a surprise to see Man City lay down a record fee for an English defender after spending £108m on Benjamin Mendy and Aymeric Laporte. But Guardiola wanted a whole new defence after watching his side leak goals in his debut campaign in 2016-17.

Walker has grown to become a mainstay in the City backline, and kept his place despite the subsequent arrival of Joao Cancelo. Even at 32, he remains one of the quickest players in the division — and Man City will continue to benefit from his creative exploits alongside his blistering pace for years to come.

Where Chelsea had failed, Pep Guardiola succeeded. Just a year after Everton had repeatedly turned down bids for their star centre-back, they sold Stones to Man City for a club-record fee.

It hasn’t been a straightforward journey for the Yorkshireman, however. Frozen out of the team and struggling for fitness, Stones faced an uncertain future only 18 months ago. But the centre-back has forced his way back into Guardiola’s plans, forging an impenetrable partnership with Ruben Dias as City’s rock-solid defence pushed them towards a fourth league title in five years in 2021-22.

After impressing with England at Euro 2020, and the FIFA World Cup 2022 on the horizon, he could be one of the players to look out for next season as he approaches his peak years at 28.

The rich get richer. Kalvin Phillips joins Man City as Pep launches the ultimate assault on the Champions League!

How good of a signing is Kalvin Phillips?

Tap to read our analysis and grade#KalvinPhillips #ManCity #Cityzens https://t.co/rNsdAVIlOC

Manchester United scoured through countless right-backs before settling on Wan-Bissaka. The logic appeared sound – the Palace academy graduate had earned himself a reputation as one of the very best one-on-one defenders in the game and he was coming into a back four that would crumble in a breeze.

His defensive attributes were obvious and with Harry Maguire, Wan-Bissaka played a key role in firming up United’s ropey rearguard. But United need more from a full-back. Upon crossing the halfway line, Wan-Bissaka has been hard to watch. There was an improvement through last season, but not enough to stop United from pursuing a new right-back.

Under Brendan Rodgers, Raheem Sterling had two very good seasons at Liverpool before the relationship soured towards the end of his tenure at Anfield. A young speedster who could leave his marker behind with his quick acceleration both on and off the ball, Sterling was a gem who needed some polishing.

While Luis Suarez and Daniel Sturridge deservedly hogged the headlines in Liverpool’s quest for their first-ever Premier League title, a young Sterling who had yet to turn 20 also played his part with 10 goals.

Following Suarez’s departure to Barcelona and Sturridge’s injuries, Sterling suddenly became their main man in attack and finished only behind Steven Gerrard in the goalscoring charts. By then City had already made bids of £30m and £40m, both of which were rejected by the club. But by then Sterling had enough and he forced through a move as Liverpool eventually accepted a £50 million bid.

Chelsea had searched far and wide for a player to replace Ashley Cole but to no avail. Filipe Luis left, Baba Rahman flopped and Emerson has struggled for consistency. But in Chilwell, it looks like the Blues have their man for the left-back spot. Arriving as part of the Blues’ £220m summer splurge in 2020, the England international has taken his game to another level with the Blues.

Some Leicester fans questioned his reasons for leaving, but Chilwell’s Champions League medal has quickly put that argument to bed. He has had to earn his place in the side after Frank Lampard’s departure, but Thomas Tuchel views him as a key cog in his 3-4-3 setup. The fact you can expect him to be on the Chelsea team sheet for the next five years proves he was worth the investment.

Few people had heard the name ‘Ben White’ until he played a starring role in Leeds’ promotion back to the Premier League in 2019/20, and he looks to have all the tools to become a top centre-back.

At the moment his £55m price tag looks a bit steep, but at just 23 he’s got plenty of time to develop and mature, and this could end up being one of those transfers we look back on and think ‘as if we thought they’d paid over the odds for him’.

Speaking of Ben White, the English defender played a part in the Gunner’s recent documentary – All or Nothing : Arsenal

After a long wait, Jadon Sanho had finally arrived at Manchester United. The England winger has signed a five-year contract with the club keeping him at Old Trafford until 2026. United paid Borussia Dortmund £75m pounds to bring the talented winger.

Sancho is now the third most expensive player in United’s history while he is also the third most expensive British signing. A former Manchester City academy graduate, Sancho moved to Borussia Dortmund at the tender age of 17 and established himself as one of the brightest young talents in world football. In his four seasons at Dortmund, Sancho 50 goals and assisted 64 times. He represented the Bundesliga side in 137 games across competitions Sancho won the DFB-Pokal and DFL-Supercup title with Dortmund.

£80m for Harry Maguire may be a little steep but there’s no doubting that he’s a quality defender.

The 29-year-old has added leadership to United’s backline and if Erik Ten Hag can bring in a top-class defender to provide competition to him and Varane next season then United’s defensive woes could be a thing of the past.

Jack Grealish sealed a British transfer record £100 million move to Manchester City from Aston Villa. The 26-year-old left his boyhood club after making 213 appearances and scoring 32 goals since making his senior debut in 2014. He had signed a six-year deal with the Premier League champions, which will see him earn around £20 million per year.

The 100 million Pounds move is one of the biggest transfers in history and also makes the England international the most expensive British footballer surpassing the £85 million Real Madrid paid for Gareth Bale in 2013. It is also now the most expensive transfer in Premier League breaking the £93.25m Manchester United paid Juventus for Paul Pogba five years ago.