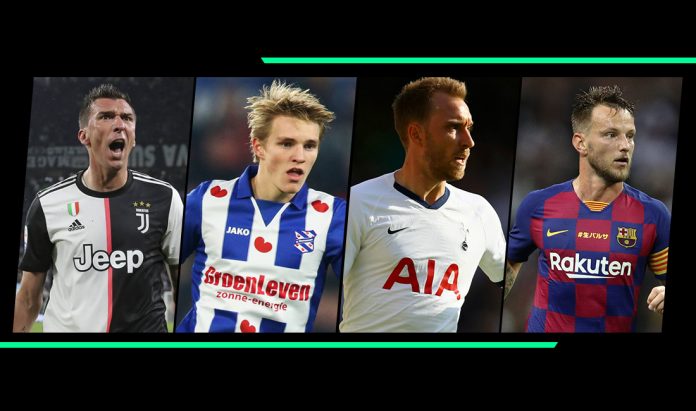 As the European clubs try to revamp their strategies and formation with the international break, there is also talk of the upcoming winter transfer in January 2020.

As Europe’s top five leagues find their rhythm, formation and figure out their missing set-piece players, the winter transfer window will be heating up soon and these are the 4 players to watch out for:

Mario Mandzukic was close to sign up with Manchester United during the summer transfer but it seems the Red Devils have not given up their interest for the Juventus striker. According to various reports, Old Trafford and the Croatian international have reached a verbal agreement for a move in January as Solskjaer is desperate for a striker following the sale of Romelu Lukaku and Alexis Sanchez.

Not to be missed is Norway’s own football sensation Martin Odegaard who is making headlines in La Liga.

He joined Madrid in 2015 at the age of 16, signing for £4.1million but only played one game for the Spanish giants. Though full of potential, Odegaard’s journey has been one of finding his feet and it seems he has found it with Real Sociedad. So much that Manchester City and United, Liverpool, Arsenal and Wolves are vying for the Norwegian. Odegaard has gone on record stating he wishes to fulfill his loan spell at Sociedad but going by the gaps in the mentioned clubs, expect a big offer coming his way.

Informal revelations from bestenorskecasino.com report that the Norwegian public is going crazy on the online bookmakers trying to predict if he will move away from Real Madrid or not over the winter transfer.

The Dane is again in the minds of Real Madrid’s transfer agenda and not repeat the missed opportunity over the summer. MARCA reports, Tottenham Hotspur chairman Daniel Levy has ordered his close aides to look for an adequate offer to sell the 27-year-old midfielder. Real Madrid are lacking energy and a player who can keep up the tempo in the middle third and though Eriksen is not an ideal choice, he can certainly match the pace when it comes to La Liga style football. His technique, first touch and pass accuracy can boost the team’s midfield section. It’s up to Zizou to make the final call as his focus on Pogba from United missed out on roping Eriksen.

With the addition of Frenkie de Jong over the summer transfer, Ivan Rakitic was bound to get limited opportunity to play in the first-team for Barcelona. So it is not surprising that he has issued a threat to quit the La Liga champion side. Manchester United may renew their interest in the Croatian playmaker as Ole Gunnar Solskjaer missed out in signing him over the summer. United’s midfield needs a boost and Rakitic can fit into the style of the Norwegian.

In a terse statement he said, “I don’t know what will come now. It’s tough because I want to play…there’s no better place to play than Barcelona, the best club in the world, but I need to play and not just enjoy walks around the city and the beach.”