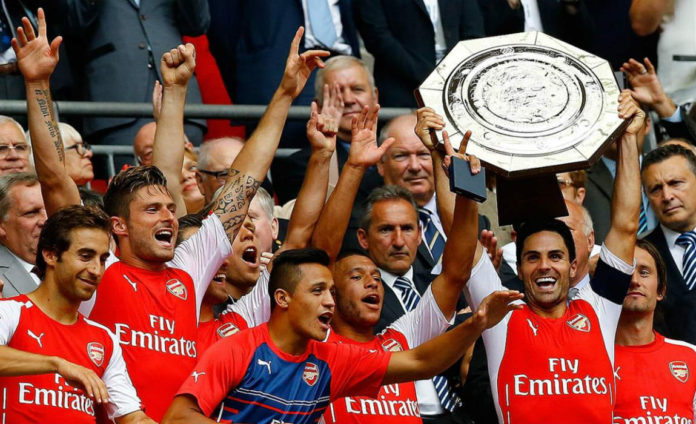 The Community Shield has given us some unforgettable matches and goals in the past. Here are the top 5 list.

Over the past few years we have enjoyed an interesting rivalry between Manchester City and Chelsea, but this match has been voted as one of the best encounters between the two heavyweights of of Europe.

Fernando Torres gave the Blues an early lead but after the suspension of their ace defender Branislav Ivanovic, Man City came strong in the game with Yaya Toure scoring the equaliser.

Carlos Tevez handed Man City the much needed lead with an incredible strike, followed by a goal from Samir Nasri which put the game to bed for Manchester City.

This match is remembered as one of the best high-octane encounters between rivals Manchester United and Chelsea.

Nani opened the scoring for the Red Devils in the ninth minute from a long range finish but within twenty minutes Ricardo Carvalho and Frank Lampard put Chesea ahead.
But the drama didn’t end here. Wayne Rooney got on the end of a through ball before guiding it past Chelsea goalkeeper Petr Cech as the match progressed into penalty shootouts.

Man United failed to deliver from the spot kicks and Chelsea clinched the trophy 4-1 on penalties.

One of the best comeback wins for Manchetser United as they went down by two goals, early in the first half after Joleon Lescott and Edin Dzeko scored for Man City.

However, the Red Devils held on to their nerves and Chris Smalling scored form a cross and pulled one back for Man Utd followed by two brilliant goals by winger Nani, with the last one coming in the 90th minute that clinched the title for Alex Ferguson’s side.

One of the many brilliant performances from Eric Cantona helped Leeds to clinch the title against a strong Liverpool lineup at Wembley. Cantona went on to join Manchester United, months after this match.

A brilliant hat-trick from Eric Cantona and a goal from Toni Dorigo helped Leeds United to steal the title away from FA Cup winners Liverpool.

Ian Rush and Dean Saunders scored for Liverpool and an own goal from Gordon Strachan, took their tally to 3 goals. But the Liverpool defense couldn’t stop Cantona from dominating the game.

No one can forget Manchester City’s humiliating 3-0 defeat against Arsenal in the Community Shield, ahead of the 2014 EPL season.
Arsenal dominated the proceedings right from the kick-off with Santi Cazorla, Aaron Ramsey and Olivier Giroud scoring the three goals for the Gunners, a day which new Man City goalkeeper Willy Caballero would like to erase form his memory.