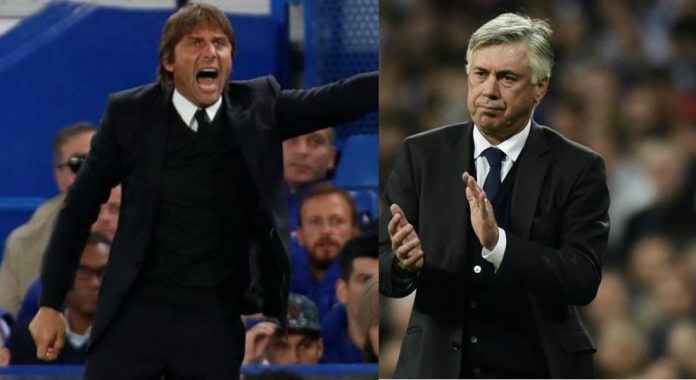 Antonio Conte has slammed reports linking Carlo Ancelotti with a return to Chelsea – saying there’s a lot of bulls*** around the club.

Conte is feeling the pressure with reports claiming that Chelsea are planning a potential reunion with Carlo Ancelotti.

Reports have also claimed that Conte’s performance is under boardroom scrutiny and the Blues bosses have grown tired of his excuses following Chelsea’s poor start to the season.

But Conte is furious with the suggestions that Ancelotti could replace him at Stamford Bridge.

He said: “There’s a lot of bullshit. They try to create problems between me and the club. I’ve answered this very well in the past about different issues.

“I’m in touch with Carlo as he’s my friend. He does not mean nothing. Why? Honestly I don’t read a lot.

“I don’t care what the newspapers write about my future. This is my job.

“Carlo is my friend and I have great respect for him. He was my coach at Juventus.”

The Sun claim that the Blues bosses are ready bring back Ancelotti at Stamford Bridge as they are increasingly growing confident that Conte would not be able to see out his 20 months at Chelsea.

And Conte had earlier revealed that he wants to return to Italy one day and has been heavily linked with a move to Serie A – but as of now the Italian has made it clear that he is fully focussed on his job at Chelsea.