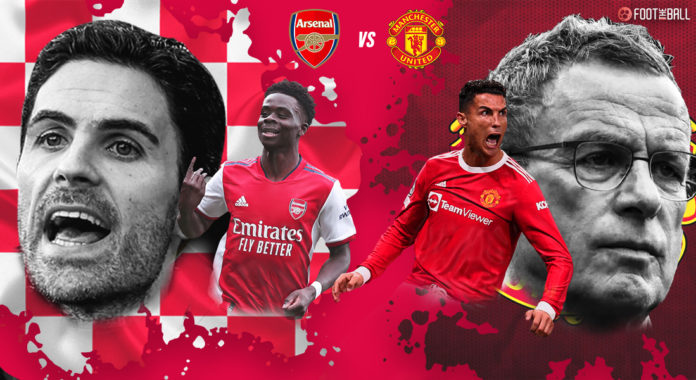 The most unpredictable match of the weekend? It very well could be. Arsenal arrested their slide with an emphatic win over Chelsea. Meanwhile, the Red Devils were spanked 4-0 away to Liverpool.

The Gunners bounced back from three consecutive losses to win 4-2 at Stamford Bridge. It was a topsy turvy game with practically no defence being played. Mikel Arteta rightly lauded the attitude of his players and Arsenal are level on points with Spurs. The return of Champions League football is the ultimate goal for the Gunners.

🍿 We know you’ll want to watch this one again

📺 The best of the action from #CHEARS

👊 WE ARE THE ARSENAL pic.twitter.com/cOMoo4zXGD

They have a bevvy of young stars who can hold their own against any opponent. Bukayo Saka, Emile Smith Rowe, and the star against Chelsea, Eddie Nketiah. The defensive issues do need addressing and that will be Arteta’s main focus. If the Gunners can pull off a win at home, they will virtually knock out their opponents in the running for fourth the spot.

It has not been a great time for Manchester United supporters. Having earned a much needed over Norwich, they were torn to shreds by Liverpool. The gulf in class between the two clubs was extremely evident with United struggling for almost all the match.

Ralf Rangnick has been very vocal in talking about what all needs to change. Moreover, the revolution has to wait until after the end of the season when the new manager is set to take over.

Additionally, they have to get by Arsenal to remain in the hunt for top four. Cristiano Ronaldo will be looked at for goals and moments of inspiration. Above all, the defence needs to start performing. Harry Maguire has not had a great season but a good performance is needed. Therefore, a lot of eyes will be on how United perform in that department.

Arsenal have no fresh injuries to report. Kieran Tierney and Thomas Partey are the long term absentees. Whether Nuno Tavares starts at leftback will be an interesting call.

Several first-team players did not feature in the defeat to Liverpool. Ronaldo and Raphael Varane should return at least. Paul Pogba is out.

For Arsenal, a lot of hope lies with their young attackers and Bukayo Saka in particular. 10 goals and five assists from 31 matches have been a very good return. Saka has finally found his place on the right flank and is a constant menace for the fullback. Moreover, he was excellent against Marcos Alonso and converted his penalty.

Bukayo Saka has been directly involved in 15 Premier League goals this season:

A memorable night for Arsenal. 👏 pic.twitter.com/u6E0k2JxdK

Saka has served as the perfect outlet for when the backline comes under pressure. He can run with the ball quickly and is hard to stop. Alex Telles is a bumpy defender who does better at the other end. He will need to constantly drop back and be on his guard if Saka is to be stopped. Similarly, Harry Maguire also has to be wary of not getting dragged out of position.

Only one man is sustaining United’s charge for the Champions League. Cristiano Ronaldo netted a hat-trick against Norwich, including the first free-kick in many years. Those three goals took him to 21 for the season, by far the leader for United. Ronaldo’s expert movement inside the box and ability from anywhere makes him a lethal proposition.

Moreover, the backline of Arsenal is not performing too well. There will be chances to capitalize on. Similarly, Ronaldo himself can set up players and shots at goal from any distances.

It is a tough one to call, despite the most recent results. Either team could win it. Therefore, the three points will be extra sweet for whoever does come out on top. FootTheBall predicts a 2-2 draw between the two sides.