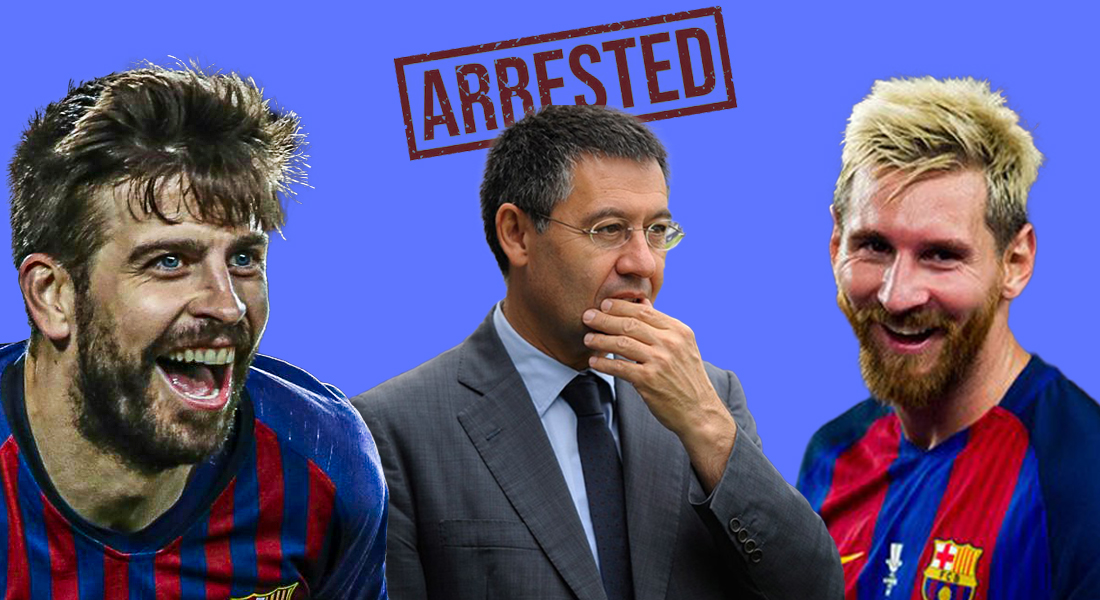 The offices of Camp Nou were raided on Monday morning by a special division of the Catalan Police, The Mossos, who have arrested Barcelona’s ex-president Josep Maria Bartomeu and three more executives in relation to the ‘Barcagate’ scandal.

Josep Maria Bartomeu, who resigned from his post last year in October after multiple players  and fans protested, which set in motion the process of election for a new president, which is set to take place this month.

Ex-president Josep Maria Bartomeu,CEO Oscar Grau, head of legal Roman Gomez Ponti and Jaume Masferrer – the former right-hand man of Bartomeu, have reportedly been detained in relation to the ‘Barcagate’ scandal. The new documents that have emerged after the raid of the  Camp Nou shows the inner workings and financial transactions between the club and I3 Ventures.

🗣️ "The truth is that I find it strange that such a thing happens. They (Bartomeu) said that there would be evidence. We can't say much and will wait to see what happens with all this. To me, it seems a strange issue."pic.twitter.com/y9g8TIgYqO

After the initial claims by Cadena Ser radio, in September last year El Mundo reported that Mossos had sent a document to Catalonia’s judges, that showcased Bartomeu’s involvement in corruption, to gain personal benefits, which may have led to the club’s serious economic crisis.

‘Barcagate’ involved the transaction between then president Josep Maria Bartomeu and I3 ventures, who were paid by the club to run a 3 year smear campaign against some of Barcelona’s current,ex-players and some high profile Catalan faithfuls. The smear campaign targeted the likes of Lionel Messi, Gerrard Pique, Xavi and Pep Guardiola. I3 Ventures, was allegedly used to promote their own messages both on Twitter and Facebook to discredit others, especially people who were perceived as Bartomeu’s opponents within the club.

These allegations were denied by the media firm and Bartomeu himself constantly, which makes this new development crucial to the ‘Barcagate’ case.

🗣️ Piqué: “ They spent money to criticize legends of the club as well as active players, that's brutal. I asked for explanations & bartomeu told me "Gerard, I didn't know." ” pic.twitter.com/sGGlvTLQcv

It has become evident that Bartomeu had hired I3 ventures to run the smear campaigns ,and what is actually baffling is the fact that I3 Ventures were paid 6 times more than the market value to run such a campaign. The excessive values paid to the firm by Bartomeu has truly become a thing of shame for the club and the actual estimate of this corruption scandal is still being slowly unearthed.

After Bartomeu’s arrest twitter erupted and a volcano of memes followed and Catalan faithfuls rejoiced with unbridled joy:

Barca fans come out oh. Bartomeu and his gang have been arrested. This is great news. pic.twitter.com/zTH0ubaXE7

What's next for Barcelona…

Breaking: Ex-Barcelona president Josep Maria Bartomeu has been arrested for his involvement in the #BarcaGate scandal. pic.twitter.com/WfX0n39tER

JUST WOKE UP FROM SLEEP & SAW BARTOMEU HAS BEEN ARRESTED pic.twitter.com/zrfPB4ytYD

On monday morning he was arrested by the Police
😄😄😄 pic.twitter.com/ziHj2fbp1X

Bartomeu and Masferrer will spend the night in custody 😭#BartoGate pic.twitter.com/Ls8RdSZheP

BREAKING: According to multiple reports in Spain, Ex-Barcelona president Josep Maria Bartomeu has been been arrested for his involvement in the #BarcaGate scandal.

This is the least of what you deserve, Bartomeu pic.twitter.com/iiqCQVcdfZ