Dirk Kuyt was never the best player in Liverpool but was still loved by the Anfield fans. He wasn’t in the spotlight all the time, he wasn’t their star man and he was often criticized by English Pundits for his playing style. But despite everything he was, and he still is, a cult hero for Liverpool fans around the world. It is a shame the younger generation of football fans don’t know about this legend and we are here to change that.

Born in a coastal town in the Netherlands to a fisherman family, everyone expected him to follow in his father’s footsteps but Dirk Kuyt had big plans of his own. He used to spend most of his time playing football in the local park with his elder brothers as a kid. He joined the youth club at a local amateur club called Quick Boys, where he would eventually end his career.

Dirk Kuyt was originally a striker while he was starting out but eventually turned into a right-winger. The coaches felt that his slender body wouldn’t be able to take on the harsh tackles by the Centre Backs and hence he majorly played the role of a shadow striker.

Dirk Kuyt was not only loved by his fans but also by his teammates. Luis Suarez used to play with Kuyt during his initial years in Liverpool and he has stated in an interview once how the Dutchman helped him settle in and how he has learned to give it all on the pitch. Even Steven Gerrard has said, ” He gives 110 % for the team,” while praising him.

Kuyt was a workhorse for all the teams he played for. He used to be mocked by rival fans by saying how he idiotically runs all around the pitch whereas his fans used to lovingly call him ‘Mr. DuraCell.’ He used to give it his all on the pitch and was ready to do anything for his team. He was also famously known for scoring when the team needed the most. He used to score in injury time during extremely nail-biting matches winning the game and also the hearts of the fans while doing so.

At the age of 18, Dirk Kuyt joined the Dutch club, FC Utrecht. In the 2002/03 season, Kuyt scored 20 goals becoming one of the most promising youngsters at that time. They even reached the final of the KNVB Cup where they faced Feyenoord who were the superior of the two on the team sheet. Dirk Kuyt played some of the best football of his life helping the underdog team win the game with a whopping 4-1 scoreline. Kuyt netted the ball once and was also named as the man of the match, proving his worth at the prestigious competition.

This is the club where Dirk Kuyt played his best football. Feyenoord bought the man that stole the KNVB Cup from them in the previous season. Kuyt played for 3 seasons from 2003-2006 in Feyenoord and he hardly missed a game for the club. Kuyt’s form was spot on ever since his first season over there. He scored 20 goals in his first season, 29 goals (his personal best) in his second season and 25 in his last season. He was also given the captain’s armband in his last season at the club. The fans of Feyenoord wanted Kuyt to stay in the club forever but Mr. Duracell personally wanted glory in the Premier League and joined Liverpool. In 2015, Kuyt came back to Feyenoord one last time and in the 2016/17 season, he led the club to its first Eredivisie title in the last 2 decades. One can clearly see why fans love this guy.

Dirk Kuyt became a cult hero during his time in England. He was signed during the golden Benitez era and gave his loyalty to the club for 6 wonderful seasons. Like we mentioned earlier, he was the player who used to work the hardest throughout the 90. He made 285 appearances and scored a total of 71 goals for the club. But his quality is hard to judge through stats itself.

#OnThisDay in 2011, @Kuyt netted THAT hat-trick against @ManUtd 👌 pic.twitter.com/qYLVAafQ1B

Only if you had stood in the crowded Anfield stadium and witnessed Dirk Kuyt pull off goals at the most miraculous times possible, you will know what Kuyt means to Liverpool. He scored a goal against AC Milan in the 2006 UCL final which was ultimately won by Liverpool. He was the first person in 21 years to score a hattrick against Manchester United, an extremely difficult feat in the Ferguson Era.

Kuyt used to be in a completely different mood in the Merseyside Derbies. In 2007, Kuyt scored a penalty in the injury time in the derby putting Liverpool in the lead leaving no time for Everton to pull a comeback. This was the game that made Liverpool fans crazy about him for the first time. He was facing difficulties and criticism both on and off the pitch before this but the Derby goal changed everything for him and there was finally just smooth sailing ahead of him for the rest of his spell in Liverpool. 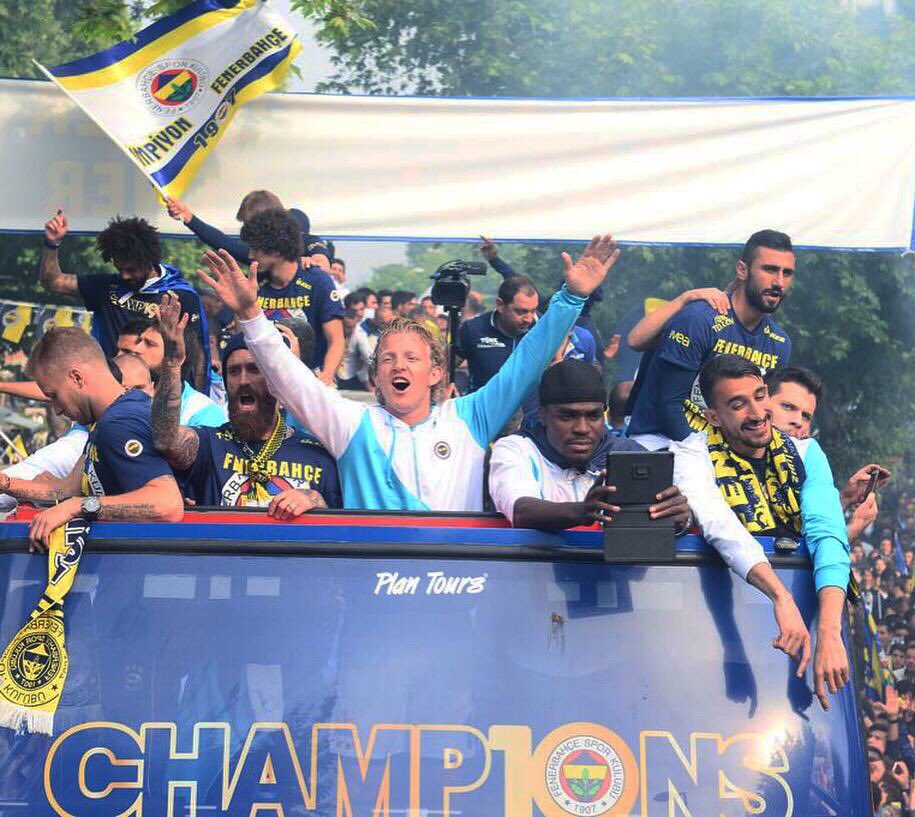 In 2012, Dirk Kuyt left Liverpool and went on to play in the Turkish League under Fernabache. The club won the Turkish Super League in 2013/14 season in which Kuyt had scored 10 goals in the league. He also scored his 250th career goal during his time in Fernabache. After 3 seasons in Turkey, in 2015 Kuyt decided to go back to Feyenoord to end his career.

In 2004, Dirk Kuyt got into Basten’s Dutch national team. Although Kuyt isn’t of the names taken when talking about one of the best players in the Dutch national team, he has made important contributions that are often left unnoticed. He was one of the best players in the 2010 WorldCup qualifiers as he scored in the quarter-finals and provided an assist to Robben against Uruguay in the semi-finals. In the actual WorldCup, he started in all the games and provided 1 goal and 3 assists which was the highest in the tournament, ensuring his country reached the finals.

Dirk Kuyt won the Dutch golden shoe in 2003 and 2006 for scoring the highest number of goals in the season. He even won the Dutch Footballer of the year in 2006. He was also the highest assist provider in the 2010 World Cup. He is also the 7th Dutch player to have 100 caps for his Country.

One final match, one last time. I am honoured and very grateful for the opportunity to play my official testimonial match: https://t.co/ugptvE3o8M.

After his final spell in Feyenoord, Dirk Kuyt had announced his retirement in 2017. But he came back out of retirement to help his boyhood club, Quick Boys, as a player to help them in their shortage of strikers. Finally in 2018, ended his 19 years of footballing career and played his last game at a charity match hosted by himself. The match was against Feyenoord’s squad vs friends of Dirk Kuyt. Famous players like Steven Gerrard, Van Persie, Jamie Carragher and many more played the Testimonial game.

Dirk Kuyt will be the manager of Feyenoord U19s from the start of next season.#Feyenoord pic.twitter.com/KO8dSIhGrJ

After his retirement, Dirk Kuyt started coaching the U-19 squad of Feyenoord but has recently left the club. One of the major reasons is his recent divorce which has left him in a really bad place in life. What holds for Kuyt in the future is a mystery yet to be solved but we are sure that he his going to continue down the coaching path and we might as well see him become the manager of Liverpool someday. Until then Liverpool fans will have to trust in Klopp.