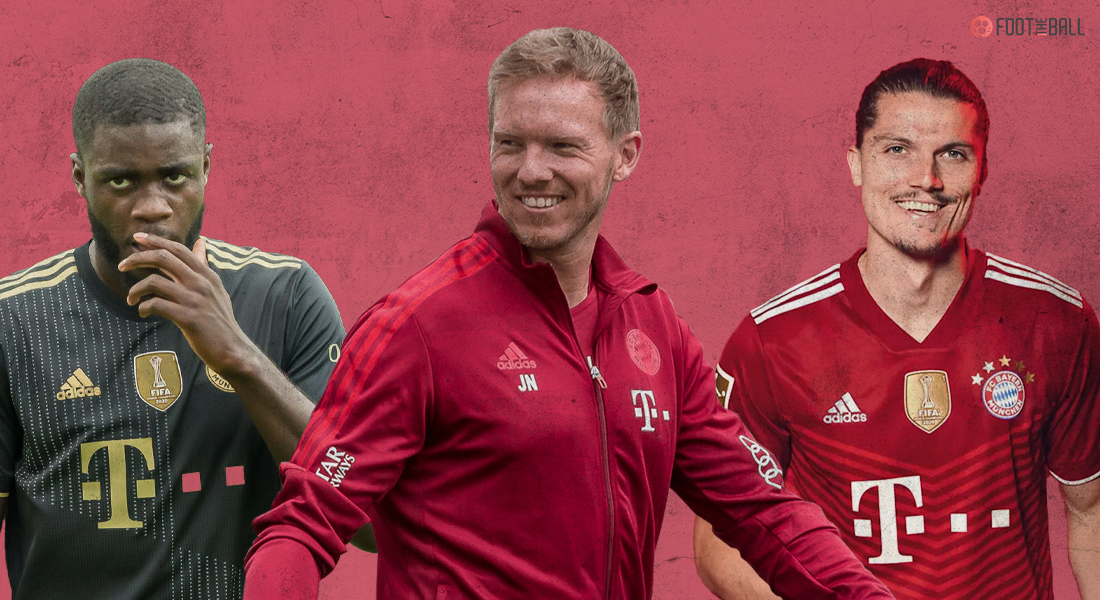 As another transfer window draws to a close in Europe, Bayern Munich have yet again managed to attract some of the best football players in the world to Bavaria ahead of the new season in Germany and Europe.

Dayot Upamecano and Marcel Sabitzer have joined Die Roten this summer after their manager Julian Nagelsmann came to the Allianz Arena from Leipzig following Hansi Flick’s move to become Die Mannschaft’s manager in the international arena.

As the new season in Germany is already underway, FootTheBall takes a look at the relative success or failure of Bayern Munich’s transfer window activity this summer in Europe.

Bayern Munich have been successful in bringing in Dayot Upamecano (€42.5 million) at the back in the Allianz Arena after the departure of such high profile players as Jerome Boateng and David Alaba during this summer’s transfer window.

The young Frenchman, under the tutelage of Julian Nagelsmann, is expected to become the fulcrum of the backline in Munich in coming seasons as he gathers experience and expertise in the sphere of defending in the Bavarian capital.

Die Roten were also able to sign Austrian midfielder Marcel Sabitzer from the very same club one day before the dreaded transfer deadline on August 31 last month for a reported fee of €16 million. Given the amount of talent and expertise he possesses, it will not be wrong to call this transaction an absolute bargain for the Bavarians.

Elsewhere, Omar Richards joins from Reading and will play the role of understudy to Canadian full-back Alphonso Davies in Munich this season, while Sven Ulreich makes an early return to Bavaria after his contract with Hamburger SV was prematurely terminated, with the German expected to follow in the footsteps of Manuel Neuer at the Allianz Arena.

Die Roten lost the defensive duo of Jerome Boateng and David Alaba this summer to Lyon in Ligue 1 and Real Madrid in La Liga respectively.

The Bavarians did not get even a single penny for the transfers of the above-mentioned defensive stalwarts as their contracts had expired in Munich. Both looked for pastures new in Europe as they left FC Hollywood in Germany to move to France and Spain respectively.

Meanwhile, former Athletic Bilbao player Javi Martinez left Bavaria after almost a decade as now he was deemed surplus to requirements with players such as Joshua Kimmich and Leon Goretzka to feature in defensive midfield.

The Spaniard joined Qatari side Qatar SC after his contract with Die Roten expired this summer in Germany. Elsewhere, Alexander Nubel joined AS Monaco on a two-year loan spell with the option reserved with Bayern Munich to cut the duration of the move to only one season if they desire to.

And last but not the least, the club hierarchy decided that Chris Richards should spend some more time on loan in Hoffenheim, hence extending his loan deal there for one more season (he had joined them on loan back in January this year initially until the end of the 2020-21 season).

Bayern Munich have welcomed some very exciting prospects in their squad this summer in the form of Marcel Sabitzer  and Dayot Upamecano as their new manager has brought these reinforcements from Leipzig.

But, on the other hand they lost veteran defenders such as Jerome Boateng and David Alaba on free transfers to Lyon and Real Madrid respectively. One point in their favour is that the addition of Sabitzer will serve to strengthen their attack even further both in Germany and Europe this season.

As with every campaign, Bayern Munich are targeting every piece of silverware on offer with Julian Nagelsmann leading from the technical area with his novel approach and methods in Bavaria.

Sabitzer and Upamecano are already familiar with his ways, having played for him at RB Leipzig and will particularly benefit from the move southward in Germany this season to join a team that contains the likes of Robert Lewandowski, Thomas Muller, Serge Gnabry and Leroy Sane.

Of particular note here is the role of Sabitzer in linking attack and defence seamlessly in Bavaria under the tutelage of Nagelsmann as both the Austrian and German prove that they can thrive at the highest level with elite clubs in Europe this season.

All in all, one can say that Bayern Munich had a pretty satisfactory transfer window this summer as they were among the few clubs that actually addressed the underlying problems with the team by bringing in reinforcements that were needed to plug the gaps left by the departures this summer in Bavaria.