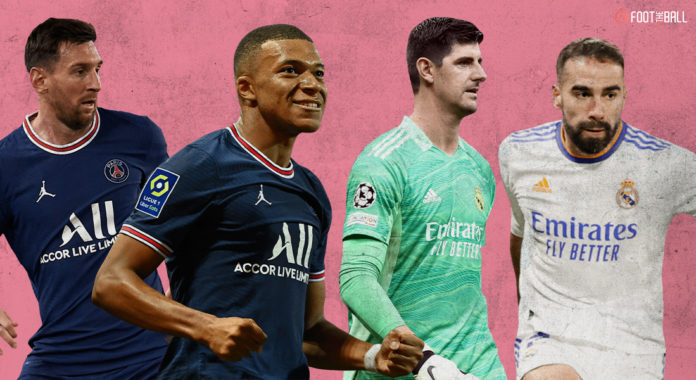 Paris Saint-Germain secured a dramatic 1-0 win over Carlo Ancelotti’s Real Madrid thanks to a last-minute injury-time winner from Kylian Mbappe.

PSG were up for it from the first whistle, pushing Real Madrid under pressure with a high press that was somewhat surprising. Neymar’s absence though, gave the Parisiens more balance in the frontline.

It was his replacement Angel di Maria who had the first big chance of the match in the fifth minute. Kylian Mbappe turned Dani Carvajal inside out and crossed towards the penalty spot but the Argentine had no control over his attempt and fired over.

Pochettino’s side continued to attack through the wings with Mbappe and di Maria providing the bulk of the threat. The left wing was proving to be particularly fruitful with left-back Nuno Mendes combining smartly with Mbappe on multiple occasions.

The Frenchman had the next big chance of the half after being played through by Lionel Messi. Thibaut Courtois though came out quickly and narrowed down the angle to make the save. Real Madrid struggled to get out of their half with Karim Benzema looking well less than a 100%.

Messi got increasingly involved, firing a shot wide just after the half hour mark following a neat dribble past three defenders. PSG were unable to fashion clear cut chances and the game got increasingly feisty. Casemiro and Marco Verratti traded yellow cards, leading to the suspension of the former for the return leg.

The teams headed into the tunnel goalless with Madrid having their only chance of the half just before the break, Casemiro firing his header wide.

The disappointment of not getting a goal in the first half seemed to re-energize PSG at half time with the Parisiens coming out even stronger. Mbappe was again the man on the end of the move after a neat flick by Achraf Hakimi but Courtois got a strong hand to keep the scores level.

The Belgian goalkeeper was again in the thick of things, making a poor judgement to punch a long ball forward which fell to Mendes. He immediately made amends by saving the shot and smothering the rebound.

It was just after the hour mark though that Courtois really took centre-stage. Mbappe got the better of Carvajal as he had done all through the night and the Spanish full-back slid in lazily to bring down the French star. The referee pointed to the spot and it was Lionel Messi who stepped up to take the penalty but Courtois judged correctly and dived to his left to make a crucial save, not just on the night but in the tie.

Pochettino threw on Neymar as PSG chased the goal they deserved and the Brazilian got involved straight away, drawing a foul from David Alaba in a dangerous area. Messi’s radar was off once more though, his attempt flying just wide off the post.

The Argentine turned provider a couple of minutes later, holding up the ball perfectly before laying it off to Mbappe on the left hand side of the box. His shot curled just wide of the far post.

Neymar nearly got the winner in the 87th minute after a great counter-attack by PSG. The winger picked up the ball deep in his own half and carried it infield before playing a good through pass for Messi. The Argentine returned the favour and played Neymar in behind but the angle was too acute and his attempt went wide.

Neymar flicked a back heel pass to the Frenchman out on the left wing. Mbappe looked up, and saw Militao and Lucas Vazquez. He did a little step-over and darted between the two defenders and curled a beautiful finish through Courtois’ legs to secure a first leg lead.

POCHETTINO GETS IT RIGHT

Mauricio Pochettino has come under fire this season for underperformance given his star studded squad but on the night, the manager had all his tactics right. The press was coordinated and organised, the defence stoic and the midfield dominant.

Moreover, he got his changes right as well. Neymar was a doubt but Pochettino used him smartly and the winger made a big difference off the bench. Conversely, Benzema was a doubt for Real Madrid but Ancelotti opted to start him anyway and the striker was completely anonymous for the 90 minutes.

THE KING IS DEAD! LONG LIVE THE KING!

It was posited in the summer that Messi’s arrival in Paris would lead to discontent among the stars but that fear has been largely unfounded. There is the question though about who is the team’s main man and it was comprehensively answered by Mbappe on Tuesday night.

The 23-year old was a shelter of creativity and ingenuity on a dull drizzly Paris evening. He tortured Carvajal all night long before making the telling contribution late on. His performance overshadowed that of Messi, di Maria and co. and was an exhibition of why Madrid want him so desperately.

Real were woefully outplayed in the Parc des Princes and were lucky to head back to Madrid  just one goal down. They had Thibaut Courtois to thank and they have a lot of thinking to do in the next three weeks so that the keeper can have a quieter night.

Moreover, they will have to do so without Casemiro and Ferland Mendy, who are both suspended. This is the Champions League though, and it is Real Madrid. Only a fool would count them out!