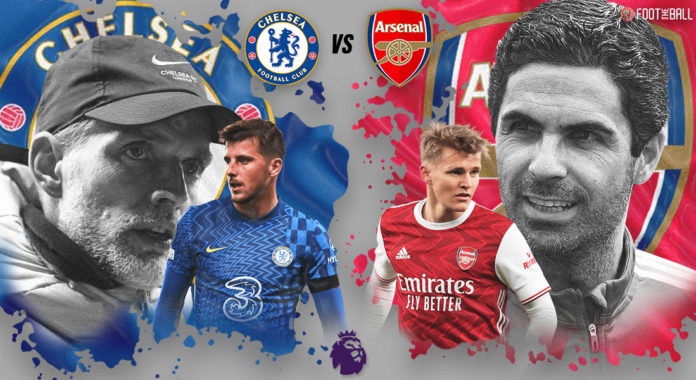 One of the most famed matchups in English football had taken a backseat in recent times. Chelsea and Arsenal have been on different trajectories for a while but in the league at least, 2022 is a battle.

The Blues have had a mixed month. They crumbled spectacularly against Brentford and in the first leg against Real Madrid.

However, they bounced back supremely by hitting Southampton for six. Though the victory over Madrid did not avoid elimination from the Champions League, Thomas Tuchel’s side are through to the final of the FA Cup.

It has been an increasingly fraught year for the club with the whole saga of sanctions. The process of finding new ownership continues while the contract situation with some players possibly leaving.

Romelu Lukaku’s problems continue with Mason Mount and Kai Havertz shouldering the goal-scoring burden. Tuchel knows facing Arsenal will not be easy this time and will be on his guard.

It has not been a happy few weeks for the Gunners. A run of three consecutive losses has left them in fifth place, three points behind Spurs. Though they have a game in hand, Manchester United are level on points in sixth.

All of these defeats have come against teams that Mikel Arteta would have expected to beat. He said as much in the post-match interviews.

💬 "It's a big disappointment. I think everybody in the dressing room knows that it's not enough but we need to stick together and get back to winning ways."

The indifferent form from all of their attacking players has been a big hindrance. Alexandre Lacazette has struggled all season but has been joined by Bukayo Saka, Martin Odegaard, and Emile Smith Rowe.

What does Arteta need to do to turn around the club’s fortunes? It is difficult to say given how the early season hopes have diminished a fair bit. A positive result against Chelsea will go a long way in making fans believe again.

Callum Hudson-Odoi and Ben Chilwell are the only long-term absentees. The combination of the midfield will be interesting to watch.

Kieran Tierney is out for the season. Thomas Partey and Takehiro Tomiyasu have also been big misses.

There has been an uptick in form for quite a few Blues. One of the brightest amongst the lot has been Mason Mount. The attacking midfielder has racked up 10 goals and eight assists. In this recent winning form, Mount has scored four times and set up two goals. Tuchel’s unwavering youth in his player has helped him massively. Mount plays just in behind the main striker and is an expert at finding his teammates.

Mason Mount has been directly involved in 6 goals in his last 3 games:

Moreover, his excellent shooting technique and mastery over sset piecesare always handy. The biggest help for Mount has been the willing runners around him. Timo Werner, Kai Havertz, and both wingbacks are always present for support. Tuchel knows that Mount will be a key player in unlocking Arsenal’s defence. The absence of Partey will hurt with Albert Lokonga not up to Premier League level yet.

For Arsenal, the hope lies with their young attackers and Bukayo Saka in particular. Nine goals and five assists from 31 matches have been a very good return. Saka has finally found his place on the right flank and is a constant menace for the fullback. He would have scored against Southampton but for Fraser Forster being infallible.

Saka has served as the perfect outlet for when the backline comes under pressure. He can run with the ball quickly and is hard to stop. Marcos Alonso is not as fast as he used to be and will not fancy facing Saka. Therefore, if the English youngster can get into dangerous areas, his teammates can expect good service.

In short, a win is vital for either side. Therefore, the game will not be played defensively. Chelsea need to solidify the third spot, Arsenal want the Champions League back. Moreover, the precarious position for the top four means a lot more is riding on this game for the away side. FootTheBall predicts a 2-1 win for the Blues.