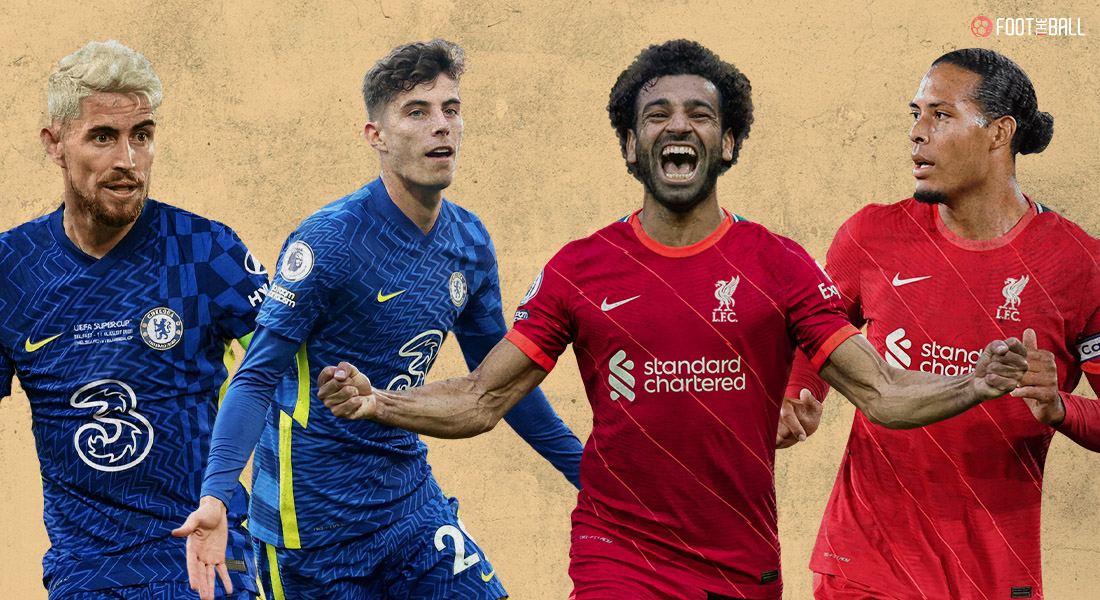 Two English giants, two champion squads, and two German tacticians; the contest between Liverpool and Chelsea at Anfield had all the ingredients to make the perfect recipe for a mouth-watering Premier League game.

Before entering the derby, both Mendy and Alisson were yet to concede a goal. Unfortunately, after the first half at Anfield, the two goalkeepers had been stunned by a goal each. Liverpool couldn’t use the advantage awarded to them as the battle with Chelsea ended 1-1.

The game started with the two teams creating attacks after attacks but it was the Blues who were the first ones to break the deadlock. While Anfield concentrated on the contest between Virgil Van Dijk and Romelu Lukaku, German attacker Kai Havertz sneaked in with his first Premier League goal of the season.

The only word that could describe his goal-scoring header is majestic. The 22-year-old was left alone by the Reds defender as Reece James’ cross perfectly looped off Havertz’s head to sneak into Alisson’s frame. And since their lead the Blues found new wings putting Van Dijk and Fabinho under immense pressure.

Kai Havertz's looping header is cancelled out by Mo Salah's penalty on the stroke of half-time, with Chelsea down to 10 men#LIVCHE pic.twitter.com/WJ8cYcgpup

New events were added in the fight between Lukaku and Van Dijk, with the Dutch centre-back blocking a few shots and the Belgian forward dribbling him once. But soon Klopp’s right-wing started unlocking Chelsea’s backline. The left foot of Salah and Elliot combined with Alexander Arnold’s crossing ability constantly put Mendy’s goal under threat.

Penalty for handball on the line after a VAR check and Reece James has been shown a red card. https://t.co/Hshgdpyn6V

And a heated moment arrived in the extra minutes of the first half as Reece James cleared the ball on the goal line with his hand according to the officials. A red card followed James’ offence while Rudiger and Mendy were booked for their loud protests. Within a blink of an eye, Chelsea was playing a man down and had witnessed their advantage being thrown out of the window.

And the second half started the same way the first half ended, with Liverpool pressurising Chelsea’s goal-mouth. Edouard Mendy had to make various saves from almost every Liverpool player to stop the home team from walking away with a triumph.

Although Chelsea had lost James in the first half, the Blues produced a staggering defensive display against Liverpool’s forwards. Salah and Jota found some running room but Antonio Rudiger or Thiago Silva guarded Chelsea’s goal like a rock.

And by the time the referee’s final whistle arrived, Liverpool had smacked almost 19 shots at Mendy’s goal but the Blues had escaped the charge. The game between Chelsea and Liverpool ended at 1-1 with points being shared.

Kai Havertz, Chelsea’s UCL protagonist broke the shackles at Anfield on Saturday with a looping header to get the better-off Brazilian shot-stopper, Alisson Becker. The goal arrived when Chelsea was awarded a corner as Marcos Alonso saw his cross being blocked by Trent Alexander Arnold’s boots.

And as Reece James stepped up to take the set-piece, the Reds defender’s eyes switched to Chelsea’s biggest goalscoring threat Romelu Lukaku leaving Havertz and Rudiger in acres of space. James played the perfect delivery inside the box which was fondly headed by the German winger.

An impossible angle to score from, Havertz timed his header to perfection as it went beyond Alisson’s gloves but silently sneaked inside Liverpool’s goals giving them the lead. Liverpool’s man-marking of Romelu Lukaku worked to perfection but they forgot about Havertz’s abilities as the German ended Alisson’s run of four clean sheets ranging from either side of the Premier League summer.

Well! A Premier League derby is almost incomplete without technology stepping in and changing the scenario of the game, even though it has been amended with various updates.

Thomas Tuchel’s Blues were dominating the pitch and the scoreline until a debatable moment arrived in the last knockings of the first half. Matip’s miscued header rattled the post as Mane tried to poke in the ball which was blocked by Reece James’ hands on the goal line.

RED CARD Chelsea’s Reece James is sent off for a handball after he denied a goal, with the decision being confirmed after visiting the Referee Review Area #LIVCHE

Diogo Jota prepared for a follow-up while Anfield erupted, appealing for handball. And after the goal-line scramble ended VAR advised Anthony Taylor to rewatch Reece’s goal-line clearance. Unfortunately for the left-back, Taylor ruled his handball as deliberate, giving a penalty to Liverpool and flashing a red card in front of the youngster’s face.

45' – Salah keeps his cool and equalises with a calm penalty just before the break. GET IN!!

While the arguing Chelsea players continued with their protest Taylor was giving out yellow cards like Christmas cards.

Rudiger and Mendy were both yellow-carded on either side of Salah’s electrifying spot-kick as the heated brawl came to a close with the referee’s first-half whistle. Klopp’s Liverpool was back in the game as the two teams marched towards the tunnel all square at half-time.

THE CONTENDERS NEED TO PONDER!

When the final whistle was blown at Anfield, Chelsea might have been the happier team out of the two. Liverpool played against Chelsea with an extra man for more than 45 minutes but couldn’t score a goal to steal three points from the European champions.

Mo Salah’s penalty might have equalized the scoring, Liverpool had nothing to show for the pressure they created in the second half.

Which way will this one go❓

While for Chelsea, the Anfield escape doesn’t guarantee them success. Thomas Tuchel might need answers from Mendy and Rudiger who picked up unnecessary yellow cards against Liverpool.

Although Reece James’ red card could be seen as a harsh decision, Anthony Taylor had given the other players numerous warnings before cautioning them. They lost the services of Havertz and Kante in the second half owing to the red card. While Thiago Silva’s substitution indicated the need for a leader on the pitch for Chelsea.