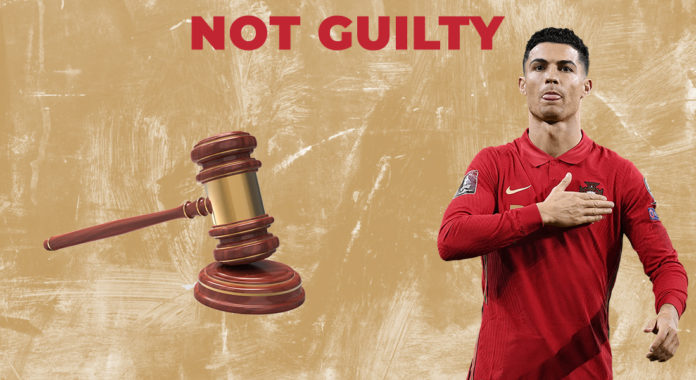 On Sunday, a United States court dismissed the rape allegation lawsuit against Machester United and Portugal footballer Cristiano Ronaldo. According to the judgement, since the evidence was based on either stolen or leaked records, the evidence was considered tainted. US District Judge Jennifer Dorsey said that the accused lawyers got his information through confidential documents.

The US legal system follows the ‘fruit of poisonous tree’ concept. According to this, any evidence obtained through tainted means is treated as compromised. This brings to an end a case that has gone on for more than ten years. Kathryn Mayorga, a school teacher and model, accused Ronaldo of raping her in 2009.

We at FootTheBall follow the timeline of the case.

June 2009:  Kathryn Mayorga, who was then in Las Vegas, went to a party with Ronaldo. According to her, the footballers raped her at the party.

June 2009: Mayorga contacts the Las Vegas Police after she was allegedly assaulted. She told her dispatcher that since the person who assaulted her was a public figure, she wanted to remain anonymous. After that, she was taken to a hospital where a rape kit examination was conducted.

June 2009: Cristiano Ronaldo claimed that the sex was consensual, and he did not force himself upon her.

January 2010: The lawyers of Mayorga and Ronaldo got in touch over an out-of-court settlement. Reports state that Ronaldo paid her $375,000, and in return, Mayorga signed an agreement which said that she could never talk about allegations against the footballer.

April 2017: The case went under the radar for the next eight years. That was until German news site Der Spiegel published the story. According to the site, Ronaldo forcibly took Mayorga into her room and, despite opposition from her, sexually assaulted her. The magazine said it received a letter from Susan K, who was later identified as Mayorga. According to the letter, Ronaldo said, “99% of the time I am a good guy but don’t know what happened to 1%”.

April 2018: A year after the reports, Cristiano Ronaldo came into the public for the first time on the allegations. The footballer said that he was being falsely implicated. His agent Jorge Mendes said that the Der Spiegel reports were a work of ‘journalistic fiction.

Read More: Mason Greenwood Case: A timeline of the allegations on the manchester United footballer

September 2018: Kathryn Mayorga waived her right to anonymity and came out in public. This happened 18 months after the Der Spiegel reports. Ronaldo threatened to sue the magazine. At the same time, Der Spiegel and Football Leaks got more information on the case. Mayorga said she dared to speak against it after witnessing the ‘Metoo’ movement.

September 2018: The Der Spiegel journalist Christoph Winterbach who was a part of the team that did the story on Ronaldo, wrote a Twitter thread on the matter. Winterbach said that the news outlet had documents signed by Ronaldo in which he had admitted that despite opposition from Mayorga, he had gone ahead and sexually assaulted her.

This is a thread about the rape allegations vs. @Cristiano: About our research @derSpiegel, about Ronaldo's reaction and a little insight into why the alleged victim Kathryn Mayorga speaks out about the case nine years later. This is the story btw: https://t.co/fwv26PhCSx 1/24

October 2018: Mayorga sued Ronaldo as her lawyers tried to have the Non-Disclosure Agreement (NDA) voided. A video of the pair dancing in 2009 also surfaced online.

October 2018: Las Vegas Police reopen the sexual assault case. “At the time the report was taken, the victim did not provide detectives with the location of the incident or suspect description. The case has been reopened, and our detectives are following up on information being provided,” the statement said.

October 2018: Ronaldo denies the allegations stating that rape was an abominable crime.” They wanna be famous to say my name, yeah, but it’s part of the job. I’m a happy man and all good,” he said.

October 2018: Portugal omitted Ronaldo’s name from the national team for their matches against Poland in the UEFA Nations League and an international friendly against Scotland.

I firmly deny the accusations being issued against me. Rape is an abominable crime that goes against everything that I am and believe in. Keen as I may be to clear my name, I refuse to feed the media spectacle created by people seeking to promote themselves at my expense.

January 2019: Ronaldo denies charges of sexual assault from another woman. Jasmine Lennard, who claimed she dated the striker in 2008, came out in public, stating that the player had threatened her to get her kidnapped if she dated another person. Lennard claimed she wanted to help Mayorga. However, Ronaldo denied that he even knew Lennard.

January 2019: Mayorga’s lawyers say that they have contacted Lennard and will meet her and her legal team.

The lawyer of Kathryn Mayorga, who has accused Cristiano Ronaldo of raping her in 2009, is to meet Jasmine Lennard, who claims to be the Juventus forward's ex-girlfriend.

January 2019: Las Vegas Police issue a warrant for collecting Ronaldo’s DNA. The police wanted it to match against the DNA found on Mayorga’s dress. However, Ronaldo’s lawyer said that this was a common practice. They also argued that the DNA was bound to match since the pair had consensual physical relations.

March 2019: Ronaldo’s then club Juventus did not take part in the ICC pre-season matches in the United States. This was due to the fear that the authorities could detain the player for the sexual assault case.

Juventus have decided against competing in the USA version of the ICC pre-season competition as they fear Cristiano Ronaldo could be detained over rape allegations. Instead they will join the Asia competition, meaning they could face #mufc #mulive [samford crimson]

July 2019: Stev Wolfson, District Attorney, Clark Country, in a statement, said that since the accusations against Ronaldo can’t be proved beyond a reasonable doubt, the player will face no criminal charges,

June 2022: US District Judge Jennifer Dorsey dismisses the case against Ronaldo. In a 42-page ruling, the judge said that the victim’s lawyer Leslie Stovall had circumvented the proper legal process to get the evidence due to which the evidence was not admissible in court.