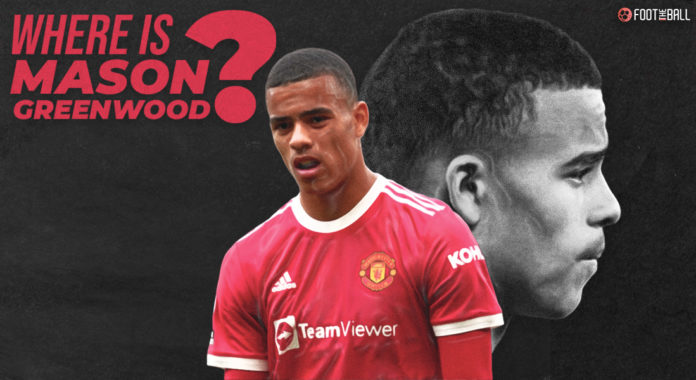 A picture is worth a thousand words. But, for Mason Greenwood, it was a fate far worse than just a thousand words. The Manchester United youngster was embroiled in controversy when photos of Harriet Robson, her girlfriend, uploaded pictures, videos and audio clips on her account that suggested she was a victim of physical abuse. “To everyone who wants to know what Mason Greenwood actually does to me,” the caption said.

This issue immediately erupted with Manchester United suspending the player. He was later arrested. He came out on bail but has been away from all the limelight. And with him gone, Manchester United are now looking for reinforcements in the summer transfer window.

Where is Mason Greenwood?

Despite keeping a low profile since his arrest, Mason Greenwood was spotted for the first time on April 1, driving a car around Cheshire while being clad in a Cartier balaclava.

But fans on social media suddenly started asking about his whereabouts after discovering that Greenwood’s profile was still present on Manchester United’s website. It is to be noted that United had barred him from the club and its premises. In addition, his profile was also removed, which was the reason for fans wondering whether he may be reinstated into the team.

However, Manchester Evening News journalist Samuel Luckhurst reported that his profile was only removed from the club’s app and not the website. This means that the club’s stance on the issue has remained the same.

This prompted replies from several fans who wanted Greenwood back on the team. Some fans even went as far as proclaiming that he is innocent and raised suspicions about Harriet Robson’s claim.

Several fans also said that Greenwood was one of the few positives in a season where they suffered humiliating defeats.

And with cases such as these taking months or even years to conclude, it could be a long time before Greenwood (if he is acquitted on all the charges) takes the field.

There has also been no significant reporting on him in the media.

Yes, he still is. Despite being suspended by the club, he remains a player. And the club have not taken the step to terminate his contract. The reason may be simple if Greenwood in the future is declared free of all charges, the act of terminating his contract will be deemed unlawful. Under these circumstances, Greenwood could sue the club, which could be more than what his contract is worth.

Meanwhile, Greenwood’s sponsor, Nike, had no such difficulty as they ended their contract with the player without any payment. However, the American multinational corporation had a clause in the contract which helped them. Under the clause, if Greenwood’s actions caused damage to Nike’s reputation and a loss of commercial value, the agreement could be immediately terminated.

ALSO READ: Why Manchester United are called The Red Devils

What next for Mason Greenwood?

His current bail expires on April 30. So, until then, he is free to move, considering he follows all the bail rules. It remains to be seen whether his bail will be extended or he will go back to jail. Manchester United have made it clear until the legal proceedings come to an end, Greenwood will not be back.

Even if he is acquitted (which would take a long time), United could settle with the player for premature termination.