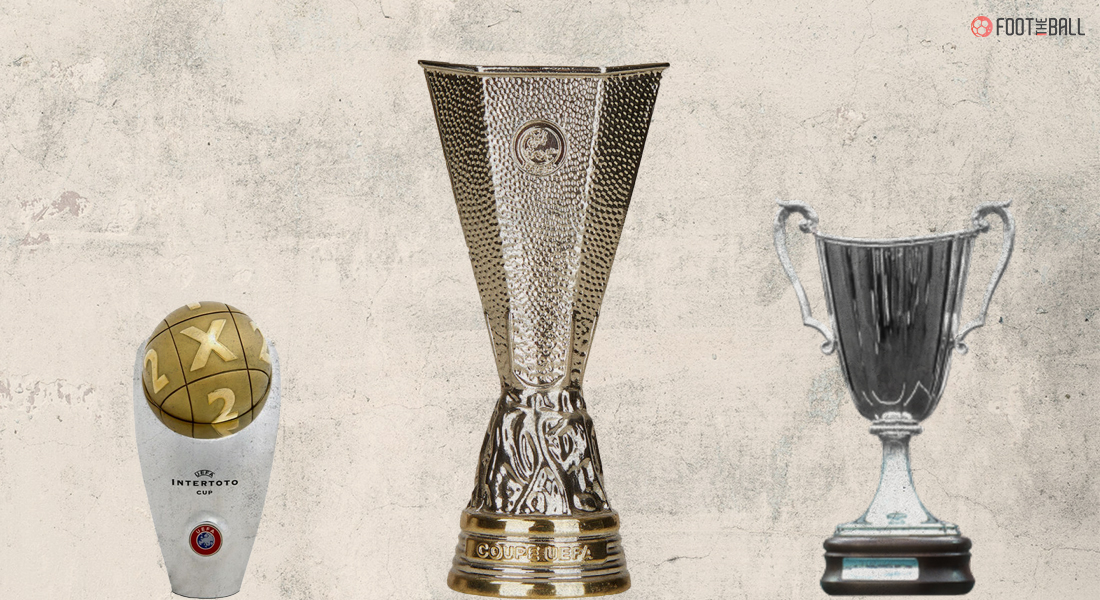 UEFA Europa League(UEL) is Europe’s second-tier club football competition with a rich history. The Europa League underwent many changes in its 50-year history to arrive at the form we know now. Europa League was simply known as UEFA Cup in 1971 when it was founded and was modified many times.

Manchester United lock horns with Villarreal in the final of this season’s Europa League. This match would determine whether English clubs can dominate the European football scene for many years or will the Spaniards hit back. Currently, the Spanish sides are the most successful ones in the Europa League history.

Inter-Cities Fairs Cup referred to as the European Fairs Cup or Fairs Cup was the predecessor of the Europa League. The short-lived competition was played from 1955 to 1971 and operated as an independent body. It fell under the grips of UEFA in 1971 and was drastically altered.

Initially, the Fairs Cup began as a series of friendly games between cities of various countries to encourage trade between them. It was played during trade fairs when it was conducted in various cities across Europe. The teams from the cities where trade fairs were held were welcome without any relevance to their League position. It also followed a one-city one-team rule. The cup was organized by a Fairs Cup Committee which had seniors members of FIFA presiding over it.

The Cup had two major eras in its history: The Spanish era and the English era. The Spanish teams like Barcelona, Valencia, and Real Zaragoza were dominant in the late 50s and early 60s. Barcelona won the first-ever Fairs Cup in 1955. The emergence of English clubs changed the landscape as teams like Leeds United, Arsenal and Newcastle dominated the late 60s to the end of the tournament.

UEFA didn’t recognize it as an official tournament till 1971. Worried by the increasing popularity of the Fairs Cup they made sure that they got it under their sanctions. Hence the Fairs Cup was ended and was rebranded as the UEFA Cup. A final playoff match was played between Barcelona(3 titles) and Leeds United(2 titles) to determine the ultimate Fairs Cup champion. Barcelona won the game 2-1 and took permanent possession of the Fairs Cup.

The growing popularity of the Fairs Cup made UEFA act quickly. The European governing body took over it and relaunched it as the UEFA CUP in the summer of 1971. The first-ever UEFA cup was played in the 1971/1972 season. A new format was given and a new title was designed to be handed to the Champions. UEFA Cup acted as a third-tier European competition at the time of its inauguration behind the UEFA Cup Winners Cup.

The inaugural UEFA Cup saw an all-English final as Wolverhampton Wanderers played Tottenham Hotspur with Spurs winning their first European crown. The tournament was played as a pure knock-out team with all the rounds including finals played over two legs. The 1997-1998 season saw the final become a one-off match but the others remained two-legged. In 2004, it adopted a round-robin format with 40 teams in the group stages with eight groups of five teams each followed by knockouts.

The tournament underwent multiple changes as competitions like UEFA Cup Winners Cup and UEFA Intertoto Cup were added to it. It was given a major rebranding in 2009 and was renamed the UEFA EUROPA LEAGUE.
The UEFA Cup had multiple winners like Sevilla (6 times), Inter Milan, Liverpool, Juventus, Atletico Madrid (3 titles each) in its 50-year history.

The UEFA Cup Winners Cup was a prestigious European tournament played in the last century. It acted as a second-tier European competition behind the European Cup/UEFA Champions League. It was played annually by the winners of domestic cup competitions.

Though the Cup Winners Cup was inaugurated in 1960, it wasn’t recognized by UEFA until 1963. Once it was recognized it was immediately considered as the second-tier competition. Since its inception Cup Winners Cup always followed a knockout format with two-legged ties until a one-off final match. It finally adopted a league stage in 1990 due to new entries into the tournament.

A title win would guarantee the champion a spot in the UEFA Super Cup final alongside the European Cup winner. It had an entry restriction of one team per UEFA membership nation with only the Champions of the previous season being the exception along with the country’s current domestic cup champion if such a situation exists.

Barcelona holds the record for most Cup Winners Cup titles with 4 trophies to their name. After the formation of the Champions League in 1992 more teams were interested in playing in it. With the expansion of the Champions League in 1997, the Cup Winners Cup began to decline. More top teams were moving out and fan interest slowly decreased. UEFA thought the league couldn’t sustain itself without top teams and merged it with the UEFA Cup in 1999. Lazio won the title for the last time in 1999.

The UEFA Intertoto Cup abbreviated as UI cup was originally called the International Football Cup. It was also a European club football competition alongside European Cup, UEFA Cup, Cup Winners Cup but held in the summer. Though the tournament was founded in 1961 it wasn’t taken over by UEFA until 1995.

The main aim of this cup was to provide European football to teams who couldn’t participate in the higher-level competitions. The league was co-founded by the Fairs cup founders. Initially, the tournament had a league and knockout stage followed by a final. As the years passed more and more teams entered the competition and it was hard to conduct a proper final. Hence multiple winners were selected and awarded the prize money.

UEFA changed its stance in 1995 and took over the tournament. To increase its value its winners were given places in next season’s UEFA Cup. The tournament became a straight knockout tournament from 1998 and stayed this way till 2005. In 2005 the number of rounds was increased and winners went to the qualifier of UEFA Cup. The winner that goes the farthest in the UEFA Cup was awarded a UEFA Intertoto Cup. Newcastle was awarded the first sole Ibtertoto trophy in 2006.

The year 2009 marked a huge change in European club competitions. Platini was determined to have a tiered system of European club football. The existing system UEFA Cup was rebranded as UEFA Europa League and was given a format change with a new trophy. The UEFA Intertoto Cup was abolished altogether and its qualifiers were getting a qualifier spot in the Europa League.

The new format had three qualifying rounds with a final playoff to join the already qualified teams in the group stages. The league stages has 12 groups of 4 teams each. The winners and runners of the group are joined by 8 teams knocked out from the Champions League would progress to the round of 32. It would follow a standard two-legged knockout format till the one-off final match.

Atletico Madrid were the inaugural Europa League winners in 2010 as they beat Fulham 2-1. Spanish sides have reigned supreme in this competition as they have won 7 out of the 11 possible titles. Sevilla did an incredible three-peat from 2014-2016. They are also the current defending champions. English sides are the next closest with 3 titles to their name.

A three-meter replica of the #EuropaLeague trophy is on display on the Green Bridge in the Main Town of Gdansk ahead of Wednesday's final between Man United and Villareal #HeartNews #UEL #MUFC pic.twitter.com/HLy6gY661b

This is how the Europa League evolved in it’s 50-year history. In the past 50 years, it has annexed two of UEFA’s European competitions and has become the second most attractive European club football. Villarreal and Manchester United will be looking to become a part of its illustrious history on Wednesday evening.