THE LESSONS FROM DEUTSCHLAND 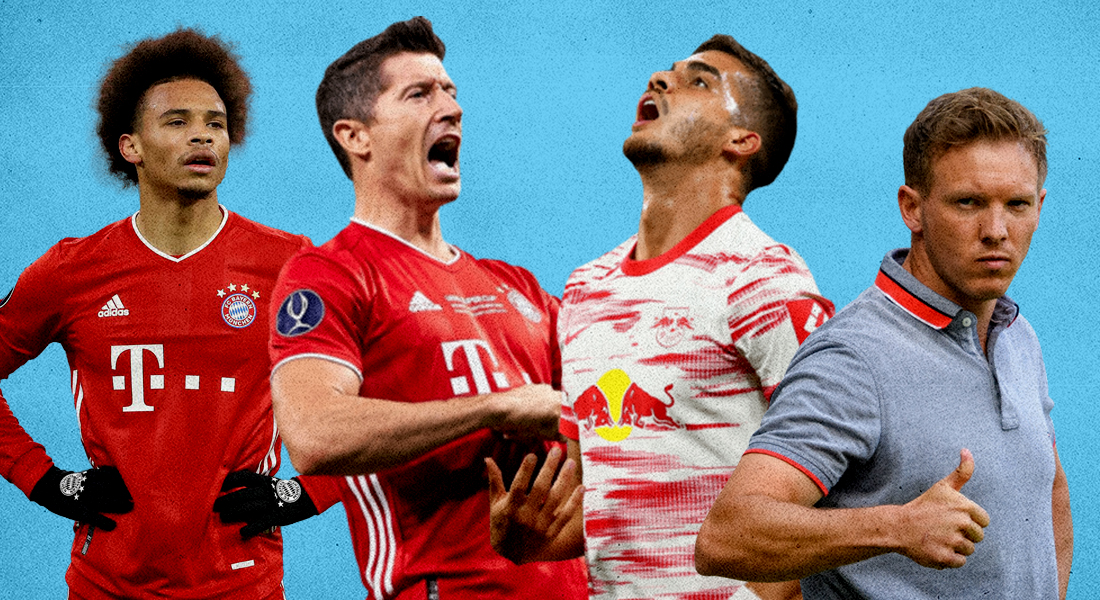 The defending champions Bayern Munich registered their first win of the campaign against Koln on Sunday night. The win drew the curtains on the second game week in the Bundesliga. It felt like normal service resumed as few familiar teams picked up wins. Of course, there were the usual dose of shock results. The German league, known for its attacking football, produced 27 goals for the second week running.

How are things looking for your side after #BLMatchday 2? 🤔 pic.twitter.com/SgncdHzWwB

Wolfsburg continuing their good form stormed to the top of the table after a comeback win over Hertha Berlin. Elsewhere Leipzig and Bayern picked their first wins of the season to get back to serious business. Dortmund suffered an upset at Freiburg to miss out on the top spot.

Newly promoted teams VFL Bochum and Greuther Furth got off the mark in their vigorous relegation battle. Bochum upset Mainz with a 2-0 victory as Furth shared points with Bielefeld after a 1-1 draw. It leaves Hertha Berlin as the only side without a point to their name at the bottom of the table.

The biggest result of the game week was Bayer Leverkusen beating Monchengladbach 4-0. The Die Werkself through a Yann Sommer own goal and further goals from Patrick Schick, Moussa Diaby and Nadiem Amiri cleaned up Gladbach.

As the title race begins to shape up in Germany, here are the five things we learned from the Bundesliga second game week in Deutschland.

Julian Nagelsmann registered his first league victory as the coach of Bayern Munich. The German boy wonder manager endured a tough preseason with the Bavarian giants. He shared points with Gladbach on his league debut and expressed displeasure over their defence. Nagelsmann is deploying a 4-2-3-1 at Bayern and needs time to implement it. The Allianz Arena paid tribute to their legendary striker Gerd Muller who passed away recently.

They were pushed all the way but @FCBayernEN get the #Bundesliga victory! 🙌

Leroy Sane started on the right of an attacking midfield three on the night. The German winger has failed to hit the ground running in Bayern and has been suffering for a year and a half. He misplaced seven passes and struggled to create an impact and was hooked off at halftime. Sane was booed off by few sections of the home supporters. He didn’t emerge from the tunnel for the second half to the stands.

Jamal Musiala who replaced Sane, assisted Lewandowski early in the second half to add insult to Sane’s injury. Bayern added another goal through Serge Gnabry before throwing up a two-goal advantage. In a two minuted spell, Koln scored twice to point Bayern’s defensive struggles. Yet Gnabry was on hand to smash the winner home and hand Nagelsmann his first victory.

Nagelsmann on Sané: "We didn't play a good game in the first half as a whole team. I heard the whistles (by the fans against Sané). The fans should support their own players. Anything else does not help" pic.twitter.com/NQU3545ymg

Nagelsmann admitted that they weren’t sharp enough defensively. The manager also asked the Allianz Arena crowd to back Sane instead of booing him. From the manager’s words and the team’s performances, Bayern and Sane are a work in progress and need time to deliver.

2) LEIPZIG GET OFF THE MARK

RB Leipzig have been ransacked by Bayern Munich in the transfer window. They have lost their manager, their best defender to the pull of the champions. However, the strength of the team lies in its ability to replace its vital cogs. They are backed by the excellent RB scouting group and a chain of sister clubs like Salzburg. Jesse Marsch, an American manager was promoted from Salzburg. Effective signings like Andre Silva and Dominik Szoboszlai were made.

Already can't wait for next weekend. The next league leaders await in Wolfsburg 👊#MondayMotivation

They suffered a defeat to Mainz on the first matchday and looked to bounce back. They took out the frustrations on a certain Stuttgart side. The Bulls were in a rampant mood as Szoboszlai opened the scoring in Marsch’s era. They scored three more goals in the second half in a rapid-fire fashion to seal the win. Andre Silva got off the mark for Leipzig from the spot and would look to recreate his exploits from Frankfurt days.

Leipzig have been the closest competitors to Bayern in the league. Despite falling short many times, they won’t give up. In Marsch, they have a young and ambitious manager with a young squad. They must continue this strong form to dethrone the champions. They meet the early league leaders Wolfsburg next week.

3) ONE STEP FORWARD AND TWO BACKWARD FOR DORTMUND

Marco Rose’s Dortmund made a statement on the opening day in the league. They dismantled Frankfurt 5-2 and looked like the real deal. Erling Haaland scored a brace for the Rhine side to pick up from where he left off. Marco Reus, Giovanni Reyna and Throgan Hazard were all on the scoresheet as well. It looked like they would cope well without Jadon Sancho who left for United.

Continuing the patchy trend of the recent past, Dortmund faltered in the second game week. They failed to back their opening day statement as they fell 2-1 away at Freiburg. Dortmund were hit by injuries to key personnel like Mats Hummels and Emre Can and suffered in the defence. Freiburg made some incisive runs in behind their lines and scored twice.

Congrats on 50 appearances in Black and Yellow, Jude! 👏

Cheers to many many more 🥂 pic.twitter.com/nATZxNML5l

Donyell Malen made his first league start in attack but wasn’t able to help his side. Jude Bellingham on his 50th appearance was an excellent presence in the midfield with his driving runs forward. Marco Rose would hope for a quick return from his injured stars as he hopes to build a solid defence. Erling Haaland needs to be provided with service more to avoid this Freiburg debacle. Dortmund meets a high-flying Hoffenheim next week and hope for a quick turnaround.

Wolfsburg made a fast start to the league this time. Mark van Bommel, a Bayern Munich legend was appointed at the helm to improve on their fourth-placed finish from the last season. Bommel, a fearsome player in his day, inherited a hungry squad with youngsters like Lukas Nmecha, Josip Brekalo, Ridle Baku and Xaver Schlager. They registered a 1-0 victory over VFL Bochum on the opening day to take all three points.

THE GREAT ESCAPE FROM BERLIN. WHAT A DUB!!! #VfLWolfsburg come back late to turn the tie.

Ridle Baku and Lukas Nmecha with the goals and we secure 3 points on the road! 🔥🔥🔥

Die Wolfe travelled to Hertha Berlin for the second game week. After a flat 45 minutes, the game opened up in the second half as Lukebakio gave the lead to the hosts. Bommel rolled his dice by bringing on Brekalo and Nmecha who turned the game on its head. Shortly after the substitutions, Schlager set up Baku to level the contest. As we were heading for a draw, Brekalo found Nmecha with a pass inside the box. The ex-Manchester City striker found the top right corner with precision to win the game for Wolfsburg.

The early season euphoria might give the fans a reason to be hopeful. Bommel already promised to change the philosophy of the club through his attacking football. But they face an acid test next week in the form of RB Leipzig. If the Wolfe can come unscathed out of this challenge, then they might be considered as genuine title contenders.

Bayer Leverkusen took a step in the right direction as they blew away Monchengladbach. Leverkusen sold their star winger Leon Bailey to Aston Villa and are confident to replace him from within. The Die Werkself had an uninspiring 1-1 draw against Union Berlin last time out. But Moussa Diaby continued his strong form to score again as they sealed a 4-0 win over Gladbach.

Gladbach, after taking a heroic point off Bayern Munich in their opener, were unable to live up to the expectations. Adi Hutter must rekindle his tactics to turn around the situation as his side languishes in the relegation zone.

The #Bundesliga points are shared as a lively encounter ends all square! 🤝

Hoffenheim played out an entertaining 2-2 draw against Union Berlin to continue their good run under Sebastien Hoeness.

Pal Dardai, promoted to the senior setup at Hertha Berlin, has a tough task ahead. Despite leading the proceedings for an hour, they lost the game against Wolfsburg. A 3-1 opening day loss to Koln might’ve already sounded alarm bells for him. The going only gets tougher as they meet Bayern Munich next time out as the only side without a point to their name.

Newly promoted sided VFL Bochum and Greuther Further showed enough quality this weekend to make one believe that they have a shot at fighting bravely against relegation.

But remember, every season is a marathon and not a sprint. The clubs must take it slowly one by one as they prepare for another round of exciting matches in the Bundesliga.