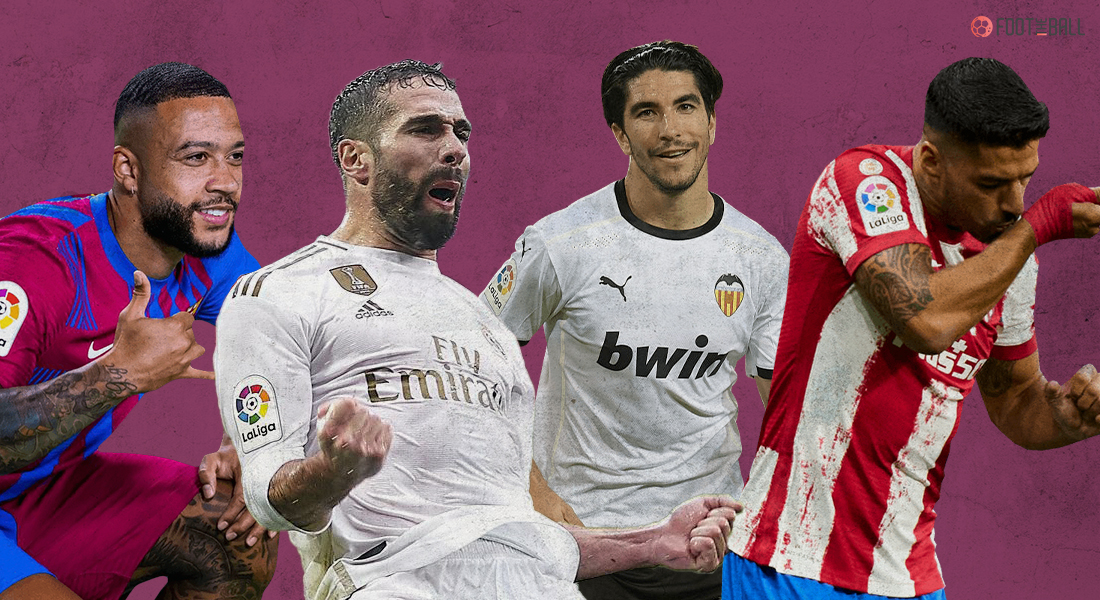 An entertaining draw brought the curtains to an entertaining week of football from sunny Spain. Aissa Mandi scored a comical own goal with seconds remaining on the last match of matchday three in La Liga. The action in the league left fans wanting more. La Liga now, like the rest of Europe, goes into an international break.

📊⚽️ | Six teams lead the way in #LaLigaSantander after this weekend's action! pic.twitter.com/kcqtj4RmwD

Real Madrid beat a resilient Real Betis to rise to the top of the table on goal difference. Their eternal rivals Barcelona beat a lowly Getafe 2-1. Defending champions Atletico Madrid escaped a scare as Mandi gifted a 2-2 draw. A rampant Sevilla were frustratingly held by Elche 1-1. Meanwhile, newly promoted Mallorca have continued their good form by being joint top.

Thrillingly, as many as six clubs share seven points and are only separated by goal difference. Along with usual contenders like Atletico Madrid, Barcelona some challengers are like Sevilla, Valencia and Mallorca are also present. At the bottom, Alaves and Getafe are the only teams without a point to their name.

What are the five things we learned from La Liga matchday three?

1) VILLARREAL HEAD IT AWAY

Unai Emery’s Villarreal are a formidable side. Having conquered the second-best cup competition in Europe, they were buoyant in the new season. However, the Yellow Sub Marine failed to convert their chances.

They were held goalless across their two opening fixtures. They visited the defending champions Atletico Madrid in sublime form. The Los Rojiblancos won both of their opening fixtures by one goal. Angel Correa scored all of their goals and was in sensational touch.

The game was up for the talking for Atletico Madrid but was goalless in the first half. Villarreal’s drought in front of the goal ended when Manu Trigueros sent a pile driver from the edge of the box through Jan Oblak. But their lead didn’t last long as Correa squared for Luis Suarez to slot home. The visitors struck again as new signing Arnaut Danjuma finished an emphatic team move.

Villarreal maintained good defensive shape to not let Atletico get past them. With merely seconds remaining in the stoppage time, a first win was on the cards. But as they say, Villarreal didn’t play to the whistle as they relaxed a bit too early. The home side launched a last-ditch searching ball hoping to find someone in red and white.

Fortunately, it found the head of Aissa Mandi who headed it into the box without a proper call. The goalkeeper Geronimo Rulli was way too casual and out of position and even a desperate scramble couldn’t save the ball from trickling over into the empty net in slow motion.

Unai Emery was furious on the touchlines and said a draw wasn’t a bad result against Atleti but the manner of the draw hurt them. The champions though accepted Mandi’s gift which gift-wrapped a point for them.

With merely hours remaining transfer window, the tension is high. Especially in close quarters around Real Madrid, the nerves must be jangling. The potential signing of Kylian Mbappe massively overshadowed the visit to Real Betis. But Carlo Ancelotti knows how to keep his squad away from the external tensions. He eased the dressing room and motivated the players to perform out there.

The game was an open one with both sides having flair but not the final flourish. Nabil Fekir of Betis was in the mood for some silky moves and tested Courtois with a curling free-kick. Karim Benzema had a great chance early in the game to take Madrid ahead. A flurry of yellow cards towards the end of the second half raised the heat. Real Madrid, dubbed as the second half kings needed to turn up again.

💪 When you enter the international break as @LaLigaEN leaders… pic.twitter.com/8N5zt4s22Y

Expectedly Benzema headed home a Casemiro lobbed pass only for it to be ruled out for offside. Vinicius Junior went close to scoring again meaning a goal was coming. It did come for Madrid but from a Betis attack. A misplaced pass from Juanmi led to a turnover on which Karim Benzema found a rampaging Dani Carvajal to volley home the winner.

The right-back covered a lot of ground to be available on the counter and eventually finished the move. He again played his part in keeping the lead as they rose to the top of the table. While all the talk of a new signing hyped the game, it is Madrid’s old guard that stood up tall again. this result leaves Betis winless in three games and languishing in the bottom half.

With the legendary Lionel Messi leaving, Barcelona suddenly lost its identity. The Argentina international, arguably considered as the greatest of all time was the past present and future of the club. As he left as a free agent, his boots were massive to be filled. Memphis Depay signed on a free from Lyon to play alongside Messi now finds himself trying to fill in for him.

The versatile Dutch forward capable of playing anywhere across the front line is being used as a centre-forward by Ronald Koeman. He also drops deep into the field to link up and plays like a winger, Messi-esque you could say. With his goals and stature, he has to be the new face of Barcelona.

Depay assisted on his league debut and opened his count against Atheltic Club in a 1-1 draw. He was again needed to settle the issue against Getafe when they visited Camp Nou. Sergi Roberto, who started the season like a man on mission fired Barca ahead with only two minutes on the clock. However, a figure from Barca’s past came back to hurt them in the form of Sandro Ramirez.

With the scores level, Depay produced a sublime effort to give them the lead again. he collected a simple offload from de Jong and bore in on the left channel of Getafe’s goal. With nimble footwork and skill, he turned their centre-backs and drove a right-footed effort past the ‘keeper at his near post. He then did his usual majestic celebration which would become Barca fans’ favourite celebration for years to come.

Depay possesses the quality and the flair to lead Barcelona to its previous glory again.

Valencia were hit where it hurt the most by the pandemic. Their already depleting finances never recovered once the pandemic settled in. The Los Che had a firebrand sale and almost sold the skeleton of the squad. They had to rebuild and expectedly suffered. Lingering about the relegation zone, they finished 13th after 38 games.

Pepe Bordalas was brought into the squad to manage. Valencia had a young striker named Carlos Soler on their hands. The Spaniard, born and bred in Valencia broke out in the previous season scoring 11 goals and assisting eight times. He made a positive start to this campaign too with three goals in three games.

Despite two of those being penalties he still earned plaudits for his overall game. Soler received his first call up for the Spanish national team in this break.

Valencia too have been stubborn and resilient in their opening games. A 1-0 in the opener was followed by a draw with Granada. They dismantled Alaves 3-0 in their most recent outing to have a positive start to their campaign. If they can keep up this good run of form, an uprising and return to glory isn’t off the cards.

Sevilla have been one of the standout performers in the league recently. Julen Loputegi has coached the Andalusians brilliantly and guided them to a Europa League title. In the league, they raised their levels considerably. In one of the hottest title races of all time, they were in firm contention till the penultimates matchdays.

Sevilla pack a punch in the form of En-Nesyri, Lucas Ocampos. They have also added Argentinian flair in Alejandro Gomez and Erik Lamela.

Lamela especially hit the ground running with three goals in as many games. Sevilla drew their most recent outing with Elche after going down early in the game. They have enough character and firepower in the squad to challenge for the title again.

All in all, this promises to be an exciting season with four teams going head to head to be crowned as the kings of Spain.