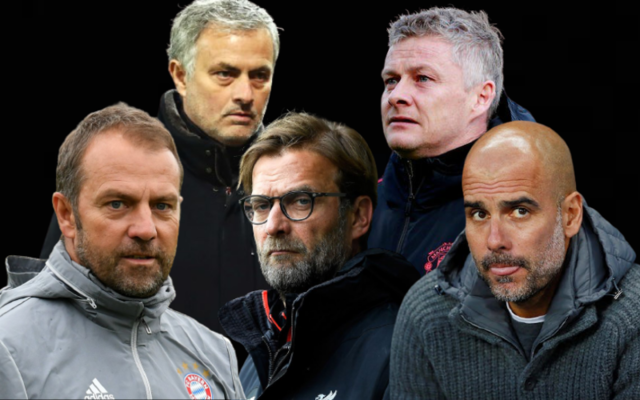 Have you ever been left completely befuddled with the technical terms coaches use in their post match conferences?

In this series we will slowly keep unraveling and simplifying the technical jargon used by top coaches in interviews.

One such term that causes a lot of confusion is ‘Transitions’.  We at Foottheball are here to simplify such concepts for you.

Not to be confused with counter-attacking, it is a different concept all together. In fact Counter-attacking is only a small part of these ‘Transitions’ as a concept.

2. Field of view
“It is important that you go beyond the field of view of the opponent. When you run in front of him, he sees you and can also start sprinting, or take care of you with physical contact. If you run out of his sight, he has lost you…. pic.twitter.com/4qGohQnVKm

A transition in football is defined as the process of recognizing and responding in the first few seconds after losing or regaining possession of the ball. Experts define transitions as a process which involves pressing and counter pressing in midfield. The purpose is to win the ball relatively close to the opposing goal, then using the disorganization of the other team to catch them off-guard.

A team’s general tactics imply a constant interaction between attack and defense patterns. The complex nature of these interactions, guides the passage of play from one area of the pitch to  another, so it requires a time for adaptation, which includes varied responses  in the case of defending after attacking (defensive transition), or attacking after defending (offensive transition).

Often spaces are left vacant when the ball changes possession in a split second, it is said the player closest to the change in possession has the highest chance of influencing the game in the next few seconds.

From a defensive viewpoint it involves cutting passing lanes, pressing and reorganizing the shape of the defense covering and making it hard for the attacking teams to exploit the gaps left by players not in a defensive position.

An offensive transition is something that is more noticeable in a game as it often leads to goals or high quality chances that are usually created at an incredible pace. So in the offensive sense a transition simply means the teams ability to exploit spaces and establish numerical advantage in dangerous areas of the pitch against  a disorganized defense.

Thus, modern day coaches look to develop the speed in which they can get their players to act or react immediately after they have regained or lost possession, helping them understand how they can take advantage of such situations.

HOW RELEVANT ARE TRANSITIONS

Transitions have become the most crucial part of football tactics in today’s time and date. Every team in world football currently, coherently or incoherently has developed patterns of play that can be defined as transitions. Every manager from the likes of Klopp to an Allardyce, make use of these transitions to attack and defend.

Jens Bangsbo, former Juventus sports scientist, and Birger Pietersen, former Danish women’s team coach, in their chapter on tactics and strategies in the new book, Soccer Science, mention the importance of transition and can be quoted saying , “Over the last few years, transition have become a crucial tactical concept in the game plan of many teams. Teams are focusing on taking advantage of situations when they regain the ball, because the opposition’s defense is often disorganized at that moment”

In the recent game between Crystal Palace and Liverpool, Firmino’s first goal was a perfectly executed offensive transition. Liverpool broke after dealing with a Crystal Palace corner ,  Firmino released  Robertson on the wing around the halfway line, and received the ball back in space right at the edge of the box, and calmly slotted the ball past Guaita for Liverpool’s third goal.

🎶 There's something that the Kop wants you to know…🎶

(Firmino perfectly embodies the principles of transition for Klopp’s system)

A TOOL FOR ALL MANAGERS

The likes of Klopp ,Guardiola, and Flick look to dominate  possession through these  transitions.As they tend to take the  game away from their oppositions.They do this by making sure their team is always trying to regain the ball in the defensive third of the opposition using these transitions as a number 10. As a result, giving rise to the high intensity style of  press followed by their teams. Mourinho  and Ole, use the principles of transition to setup their teams differently. Their teams are set up for swift counter attacks, as they set traps in mid-field and their own defensive third, allowing opposition teams to have the ball and dominate possession, only to invite the other team further up the pitch leaving space in behind the opposition defence.

(Guardiola getting his team organised)

Often in games it forces teams that have regained the ball to go and attack, and when these traps come into play, they look to break at pace and attack the disorganized defense . An Allardyce or a Steve Bruce, on the other hand do not use transitions for attacking as much the above mentioned lot. Their teams however, do heavily rely on defensive transitions, to make sure they don’t concede ‘silly’ goals .They do this by making sure their set of players always maintain their shape , even when they lose the  ball. This makes it extremely hard for the opposition team to break the stubborn  and organized defenses down.

Hopefully, now you have a better understanding of transitions is football and how relevant they are . Now when playing football manager or FIFA or football with your friends you can use these tactical principles to take your game-play to the next level.