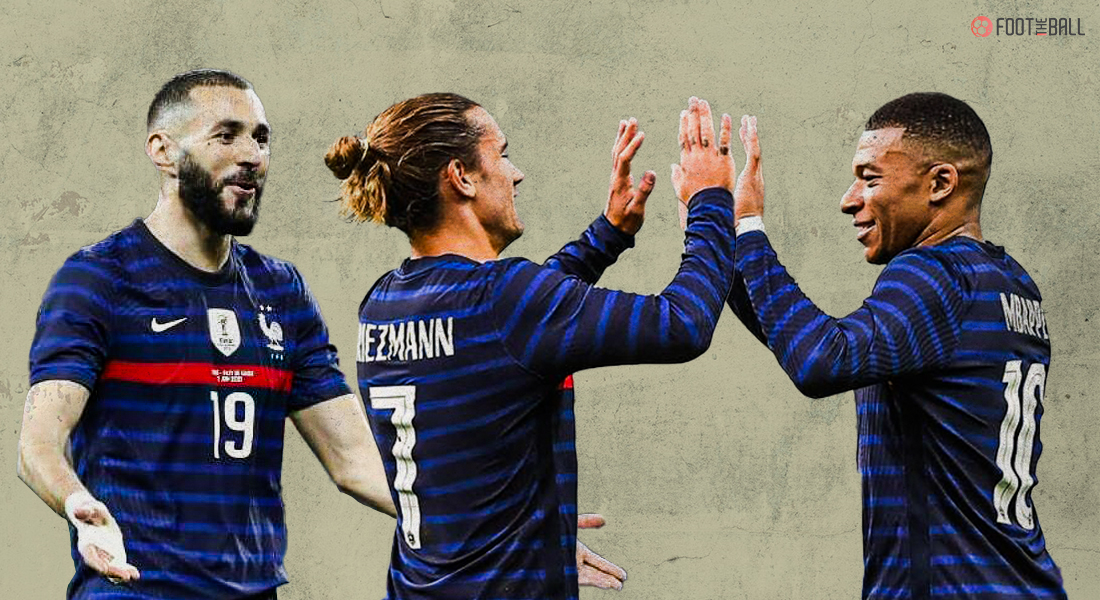 France took on Wales in a warm-up friendly tonight for before Euro 2020. The star studded squad of France which welcomed back Karim Benzema brushed aside a lackluster Wales team.

The French won the game 3-0 against the Welsh. Goals from Kylian Mbappe ,Antoine Greizmann and Ossumane Dembele saw Les Bleus brush aside the Dragons with ease.

Going into the game Deschamps and Rob Page were hoping for a positive result , but the Welsh team must be happy about the fight they showed throughout the game. The early red card and the subsequent French dominance did make it a very clear cut game.

Let’s take a look at the main takeaways from the game. Hopefully they will give us some insight into the performance of France and Wales at the Euro.

REF SURELY THAT WAS NOT A RED!

The game started brightly as within the first 10 minutes it became apparent what Wales were going to do to make it an even contest.

The speed of Daniel James and Gareth Bale were the main threats for the France back-line to deal with. After some end to end play in the first 15 minutes Welsh hopes were dashed as Neco Williams was sent off for handball.

The referee came to that decision after VAR advised him to go and check it for himself. It can be argued that the sending off was absurd and it was slightly Even the penalty seemed harsh.The ball struck Neco Williams from almost point blank range. Apparently it was because he denied Benzema a goal by putting his hand in an unnatural position which was clearly not the case. Benzema’s subsequent penalty was saved brilliantly by Ward in goal. Something even funnier happened soon after as Mbappe dived in the Welsh box after literally being touched by Rodon and was not shown a yellow for simulation.

WHAT A PENALTY SAVE THOUGH!!!!

The red card completely killed the game. Mbappe opened the account for France on the night with a sharp instinctive finish soon after. It seemingly destroyed the spirit of the Wales players, who lost their vigor against France in this game.

France scored a quick second soon after as Greizmann calmly slotted the ball in the top corner.The chance was created after excellent work by Pogba, Mbappe and Benzema around the opposition penalty area in tight spaces. That flick from Mbappe to Griezmann surmised the excellent understanding between the French players.

That's now 3 goals for @AntoGriezmann in his last 4 games for Les Bleus!

It was also the epitome of French fluidity in attack, which will cause havoc for defending teams at Euro 2020.

JUST WAS NOT BENZEMA’S DAY

The main talking point around this match revolved around one player, Karim Benzema. Los Blancos attacker who has returned to the France squad after 6  years was desperate to get on the scoresheet to mark a fairytale return to the national setup.

He looked at home in the squad linking exceptionally well  with Griezmann and Mbappe constantly throughout the match. It became apparent why Deschamps recalled him to the squad. Despite not scoring from the spot he was trying to make things happen in attack constantly. He even struck the post after delicately taking the ball down  and volleying it. Dembele followed up from that Benzema volley to net himself a goal.It was France’s third against Wales in this game. Despite trying so hard and playing so well it was slightly unfortunate that Benzema could not score a goal on his return, but surely that would not be the case at Euro 2020.