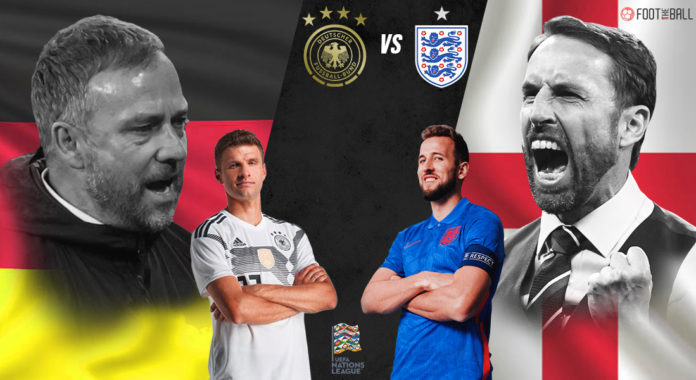 The UEFA Nations League is back and so are some tasty fixtures. One of the most anticipated matches of June features two teams who are extremely familiar with each other.

Germany have been on a tear ever since the appointment of Hansi Flick in 2021. They are undefeated in their last 10 matches. Germany have won their last five matches with an aggregate of 17-3.

Flick has been able to get the best out of several middling players for the national team. They include Timo Werner, Leroy Sane, and Serge Gnabry, among others.

Germany started their Nations League campaign with a drab draw against Italy, where they had trailed. Nevertheless, the team looks extremely well rounded in the leadup to the 2022 FIFA World Cup in Qatar.

Flick has not been averse to trying out new players, especially in defence which bodes well for the future.

It is coming home? Unlikely, based on their most recent showing. England suffered a joyless 1-0 defeat away to Hungary on Saturday. Gareth Southgate admitted that these kind of performances will not win the World Cup.

The Three Lions were disjointed all over the place. Harry Kane was isolated while the double pivot of Declan Rice and Jude Bellingham were bypassed all the time.

A session in Munich this afternoon for the #ThreeLions as we prepare for Germany. pic.twitter.com/JCItrATeYk

Southgate is providing chances to players who excelled for their clubs in 2021-22. However, he would be best served to return to the old guard against Germany.

This fixture holds a special place in the hearts of the English and they would not want to lose it, no matter if its the Nations League.

Flick can look to make a few changes to the starting lineup. Kai Havertz could get a look in, alongside David Raum.

There will certainly be alterations to the lineup from last time. Bukayo Saka and John Stones should return. Kalvin Phillips can replace Bellingham in the middle.

Thomas Muller could prove to be the most effective against England. The veteran midfielder is a master at finding spaces and teammates. Muller finished the league campaign with eight goals and 18 assists. Though he will not have Robert Lewandowski, Die Mannschaft have good goal scorers in Havertz and Werner. Moreover, Muller is also not shy of shooting from a variety of angles and distances.

🎁 Most clear-cut goalscoring chances created in the Bundesliga last season:

He caused problems when the two nations met at Euro 2020, and missed out on a golden chances. However, Flick has persisted with Muller and could reap his rewards. Not only is Muller a great leader, he knows the opposition extremely well.

England’s midfield pivot will have to be wary of letting him run with the ball. They cannot afford to allow him spaces or have Muller finding his wide attackers.

For England, the biggest threat is Harry Kane. The second-highest goal scorer for the national team has developed into a man of many talents. Apart from scoring goals, Kane is also a world-class facilitator who drops deep to linkup play.

This allows spaces left in behind, which can be exploited by the runners in behind. Moreover, Kane is also adept in holding up the ball.

Harry Kane has 49 goals in 69 England caps since making his debut in 2015 👏 pic.twitter.com/ZQDCPJg7mO

If he gets it into feet, he can turn the defender and look to spray passes. This is where the German pivot will have to be at their best. Leon Goretzka has enough of physical shape to stop Kane.

However, the craftiness of the striker should be enough to have a crack at goal more often than not. Niklas Sule and Antonio Rudiger will have their hands full in dealing with Kane’s aerial prowess.

England ran out close winners at Euro 2020 en route to the final. However, Germany are a different proposition and in the midst of a new dawn. Nevertheless, it will be a close run encounter with both sides needing the points urgently. FootTheBall predicts a 1-1 draw between the two giants.