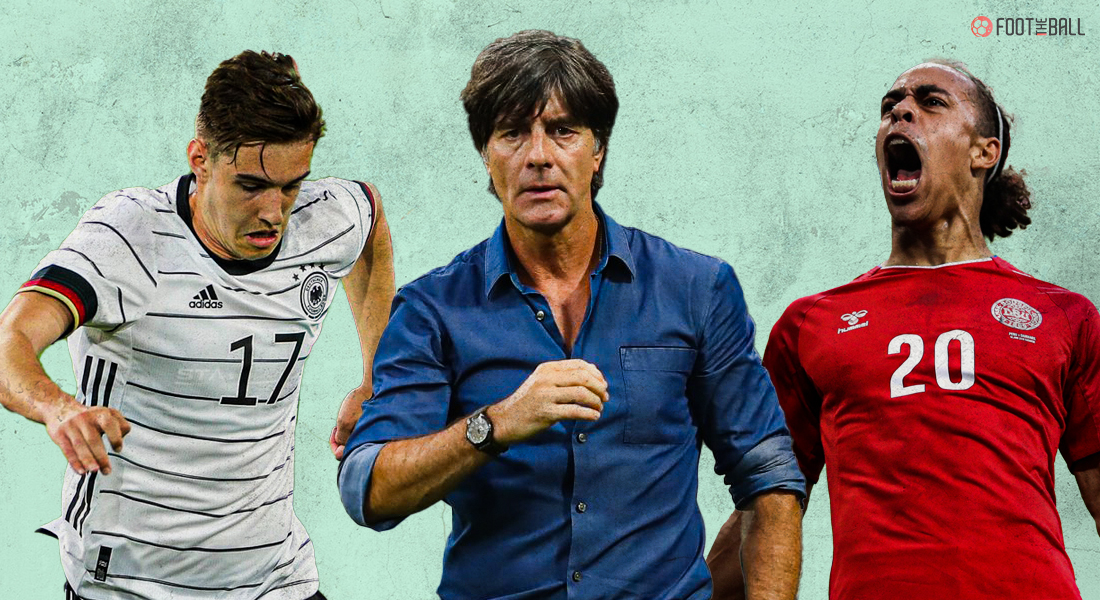 In preparation for the upcoming Euro 2020, Germany faced Denmark in a warm-up friendly at the Tivoli Stadium in Austria. Germany’s World Cup winning coach Joachim Loew prepares for his last tournament against Denmark’s young and relatively inexperienced manager Kasper Hjulmand, before handing over the job to Hansi Flick.

Thomas Muller and Mats Hummels return to the Die Mannschaft starting team after two and a half years, the first time since their devastating World Cup defence in Russia.

The match had a well-balanced start with both teams looking to create the first goalscoring opportunity of the match. Denmark tried to play the ball over the German defence as Germany pressed Denmark back into their half.

No clear chance in the first quarter of the match as Eriksen and Olsen looked to find space behind the high-line of Germany.

The first shot of the game from Neuhaus, but the 24-year old’s volley is saved comfortably at the near-post by Kasper Schmeichel.

The Germans looked more dangerous as the game progressed. Klostermann played a beautiful ball to find Muller’s run behind the Danish defence, he failed to get it past Schmeichel with the free header.

Another brilliant move came from the right side as Klostermann played a threaded pass inside the box which was lofted further into the six-yard box by Neuhaus for Sane to finish but the Bayern Munich forward failed to time his volley and sent the ball over the bar.

The Danish backline started to get more compact as the Germans kept advancing inside their half. Vestergaard and Kjaer held down the German attack at every instance and Poulsen, Eriksen and Olsen looked to initiate a quick counter. Nothing to worry about for Germany as they held the possession comfortably.

A big chance came Germany’s way when Kimmich sent a perfect ball across the goal from a wide free-kick which only needed a slight nudge to beat Schmeichel but the ball goes past the goal untouched.

Germany pumped up the pace as the half-time came closer, Gnabry got the closest for Germany in the first half as he performed a gracious feint on the ball, took it on his left foot and struck it from outside the box. Schmeichel stood shocked and unmoved as the powerful shot was saved by the crossbar.

The first half ended goal-less but highly dominated by Germany. Manuel Neuer had to hardly make a save as the half was mostly played in the Danish half.

The second half began with the Danes making a change. Kasper Dolberg came in place of Andreas Olsen.

Germany opened the scoring early in the second half through Florian Neuhaus. Robins Gosens’ cross caught the Denmark defence napping as the ball deflected off a couple of players onto the feet of Neuhaus for a simple tap-in past the Danish number one. Germany took the deserving lead in the friendly.

Denmark appeals for a penalty for a foul on Youssef Poulsen, the referee had a clear view of the incident and denied it straight away.

The second-half got dull after the opening goal. Germany slowed the gears as Denmark still looked to hit them on the counter. Robin Koch replaced Klostermann to increase defensive solidity.

Denmark finally got the ball behind Germany’s defence and their resilience paid off. Eriksen played a perfectly weighted ball for Youssef Poulsen who found a run between the two German centre-backs. The Leipzig forward made no mistake and slotted the ball calmly past Neuer to bring the scores level.

Germany couldn’t find any space behind the compact Danish defence. Denmark looked more likely to find the winner on the counter but Hummels and Koch made sure nothing gets pass them.

Both teams made three substitutes in the dying minutes, but nothing came out of it as the game ended with a draw.

These are key takeaways from the warm-up friendly –

NEUHAUS AND KLOSTERMANN KEY TO ATTACK

Germany’s best attacks came via the the Florian Neuhaus and Lukas Klostermann in the first half, and the team started looking dull as soon as the Leipzig full-back was replaced by Leeds’ Koch.

Neuhaus opened the scoring for Die Mannschaft and was their best player throughout the game. He also won some key set-pieces in dangerous areas with his smart ball control.

Denmark had a clear intent since the beginning, it was to absorb the German pressure with a compact shape and exploit the spaces with quick counter-attacks and Christian Eriksen’s performance was key to it.

The Serie A winner couldn’t thread many good passes in the first half and Denmark kept losing the ball in transition. As soon as he found his touch in the second half, Denmark started to look more dangerous, and he assisted the equaliser with a perfect through ball to Poulsen.

Despite playing with many key players rested, Germany were still the favourites coming into the game. They looked more dangerous and created more chances by pressing the opponent deep into their half but with the lack of finishing at the front and pace at the back led to the draw.

Florian #Neuhaus' goal early in the second half is only enough for a draw against Denmark 🇩🇪🇩🇰#DieMannschaft #GERDEN 1-1 pic.twitter.com/0i53SvO0PJ

Pressing is native to Germany’s game for time immemorial, but with quick opponents like France and Portugal in the group stages, Loew might have to rethink the high pressing line and opt for a more pragmatic approach