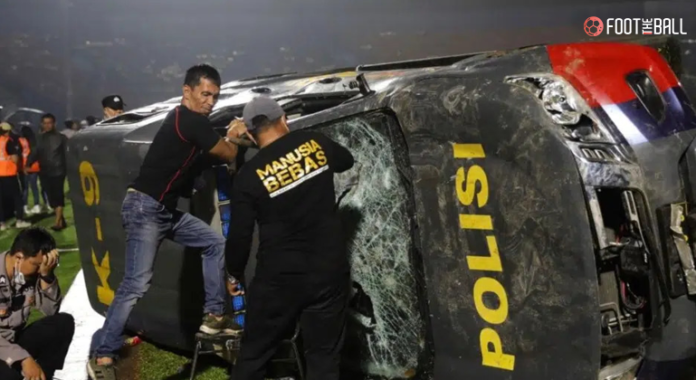 In tragic news coming out of Indonesia, more than 150 people died after being tear-gassed by riot police, leading to a massive stampede. The violence occurred following a league match between Arema FC and Persebaya Surabaya. In a game between the two teams, Persebaya Surabaya came on top, winning the match 3-2 against Arema, the home team.

However, Arema fans didn’t take kindly to the loss. Scores of fans invaded the pitch following the loss and clashed with the authorities. Videos and pictures uploaded on social media show police in full riot gear. The police then begin tear-gassing people, which is said to be the leading cause of such a large casualty.

After the Indonesia Stadium Tragedy incident came to light, riots broke out, leaving several vehicles and public property damaged. But how did the incident happen, and what is the current situation?

According to various media reports, Arema FC faced Persebaya Surabaya in a mid-table clash. The match took place at Arema’s Kanjuruhan Stadium, located in East Java province, Indonesia. Kanjuruhan Stadium’s capacity is 42,449, which was filled during the game.

Arema started the match poorly, conceding in the eight-minute before falling behind 2-0 in the 32nd minute. However, Arema came back into the game, scoring two goals within four minutes with the score at 2-2 before half-time.

The match had one more goal, which Persebaya Surabaya scored. Arema tried hard to come back into the game but ultimately lost the game. As soon as the match finished, Arema fans invaded the pitch. Videos uploaded on Twitter showed that fans wearing Arema FC invaded the pitch and clashed with the riot police.

The state of football in my country, 127 died, more than 100 injured, this is so sad, sending prayers to the family of the deceased#kanjuruhan #AremavsPersebaya #indonesia pic.twitter.com/lWmOiMzq3r

It is here that things started to get horrible. According to eyewitnesses, the riot police started to tear gas the fans. Media reports stated that as many as 34 people died immediately on the pitch. The ensuing chaos caused all fans to gather at the one exit gate in the stadium. It caused a considerable build-up, leading to suffocation and a lack of oxygen.

Videos from the hospital show scores of dead bodies with fans’ faces and lips turning blue, an apparent effect of tear gas.

The Indian G.O.A.T. Sunil Chhetri: What to expect from the FIFA Docuseries

What did the officials say?

Speaking immediately after the Indonesia Stadium Tragedy, Indonesia Sports and Youth Minister Zainudin Amali expressed his regret over the incident. “We’re sorry for this incident… This is a regrettable incident that ‘injures’ our football at a time when supporters can watch matches from the stadium,” he told the Indonesian newspaper Kompas.

Zainudin Amali also hoped that this incident would not rob Indonesia of the Under-20 World Cup, which it will host in 2023.

The Football Association of Indonesia or the PSSI said it has already started an investigation. In a statement, PSSI chairman Mochamad Iriawan said, “PSSI regrets the actions of Aremania supporters at the Kanjuruhan Stadium”. Iriawan added that the incident had “tarnished the face of Indonesian football”. He also extended his condolences to the victims and their families.

🇮🇩 More than 100 people dead because of riot after Arema vs Persebaya match at Stadion Kanjuruhan Malang, police officers action aggravated the situation by shooting tear gas which is prohibited by FIFA regulations pic.twitter.com/QFCDGuzwMd

Explained: Athletic Bilbao only-Basque policy which is going strong even after 110 years

Persebaya have also released a statement over the incident “Persebaya’s big family expresses their deepest condolences for the loss of life after the Arema FC vs Persebaya match. No life is worth football,” the club said.

The incident puts Indonesian football in a bad light, especially a year before the Under-20 FIFA World Cup. As a result, the PSSI has already cancelled all the matches scheduled for next week. After initial findings, the PSSI had banned Arema from hosting matches for the rest of 2022-2023 Liga 1 season.

Indonesian President Joko Widodo has also addressed the Indonesian Stadium Tragedy in a televised speech. “I regret that this tragedy occurred,” Mr Joko said. “And I hope this is the last football tragedy in the country.”

Under FIFA guidelines, the use of tear gas is strictly prohibited at a football match. The PSSI now await the findings of the investigative reports before taking any further actions.