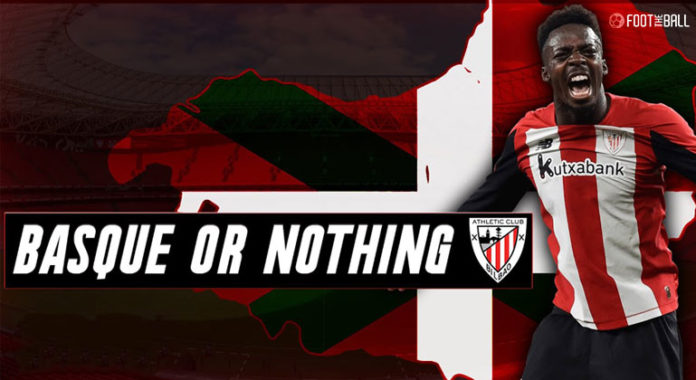 It wasn’t long ago that most football fans cared more for their club’s community values than the pursuit of glory. Until fairly recently, the experience of watching one’s favourite team was enriched by a profound feeling of being united by the voice of the region in which they grew up. The ghost of that forgotten world can still be found when we celebrate the local lad, the one of our own, or when the most egregious examples of corporate greed still provide that sharp stabbing pain of something lost.

The history of ‘Los Leones’ is incredibly unique given the desire of other top European clubs to spend astronomical amounts on talent from all over the world. Athletic Bilbao, the eight-time La Liga Champions have built their legacy by trusting in local talent. A policy that has served them well since 1912. Despite the growing financial value of the sport, unlike most clubs, Athletic Bilbao have decided to stick firmly to their transfer traditions. The club’s motto of  “Con cantera y afición, no hace falta importación” (with home-grown talent and local support, there’s no need for imports) holds as much importance today as it did 110 years ago.

In fact, when surveyed in the 1990s by El Mundo, 76% of fans said they would rather be relegated than begin to field non-Basque players. That number is unlikely to have shifted since then.

With the club’s famous Basque-only transfer policy, there’s little reason for them to sell their star players for anything less than their release clause, simply because the transfer money they stand to receive cannot be spent beyond the region’s borders. That means that big clubs desperate to sign one of their players will always be strong-armed into paying more than their expected value.

In 1912, just 14 years after the club formed, Athletic began adhering to a policy of only permitting players born in Spain’s Basque Country, or who came through the ranks at another Basque club, to play for them.

Any player from the communities of the Basque Country and Navarre in Spain, or the Northern Basque Country in France is eligible to play for Athletic Bilbao. Though, it should be noted that this is not policy written into the club’s bylaws, and is an unwritten rule. A player being ‘from’ these communities does not have to be born there, though. For instance, Aymeric Laporte became the first Frenchman to graduate from Athletic’s youth system in 2012, but was not born in the French Basque region and his only connection is a blood link from his great-grandparents.

By refusing to move with the times Athletic Bilbao, based in the largest city in Basque Country, have maintained a deep-rooted sense of family and community that goes beyond what almost any other club in Europe can offer. At every level, from coaches to scouts to players, people born and raised in the region have passed down the knowledge of the club’s – and region’s values and traditions to create something truly unique.

The Basque side are one of 3 clubs that have never been relegated, alongside Real Madrid and Barcelona. The club has won La Liga eight times, which is the fourth most in Spain. Their last title came in 1984. The club has also been the league’s runners-up seven times.  The club was last truly dominant within the Spanish domestic game in the 1930’s, having either won or finished second in the league six of the ten years.

The clubs focus to have Basque-only players has meant that each and every player has been developed through their clubs youth system or through local youth systems within the region. The players then understand the importance of playing for the biggest club in the region, and what each and every game means to their fans. Having all been fans of the club themselves for many years before representing the club.

The club will continue with its philosophy that is completely different to any club within European football. “What makes Athletic Club different is our philosophy,” says Joseba Etxeberria – a former player and now youth team manager of the club. The club’s rich history of believing in local talent means that the players are closer than ever to the fans. A club that holds dear to its authenticity and has chosen to maintain this despite the access to signing players from all around the world.

The philosophy applies only for the players in the team, being the core of the club. The fans believe it is important for the players to understand the core values of the club and what it means to the fans. Not applying so much to the club’s managers, having hired managers from around the world.

Indeed, there are two photos in the club’s museum showing the last red-and-white lineup including foreign players in April 1911, and the first to be comprised entirely of players from the own region in December of that year. Prior to that, Athletic honoured the fact that, as they put it, “Football was brought to Bilbao by the English, and the English were brought to Bilbao by the area’s industrialisation,” so English players were often fielded in the club’s earliest, amateur years. This has applied to not only their men’s first team, but also their reserve and youth teams, the women’s team (Athletic Club Femenino) and their farm team (CD Basconia).

In 2012, Bayern Munich were forced to pay over £30million for Spain international Javi Martinez, far exceeding what any club in Germany had spent before. At the time, the deal was extremely complicated thanks to Bilbao’s continuing stubbornness, with Bayern’s chairman Karl-Heinz Rummennigge later accusing them of “refusing to cooperate from the very first day”.

It was even worse for Manchester United a couple of years later. Bilbao made the signing of Ander Herrera a gruelling, year-long affair for the Red Devils, who first approached them for the midfielder in the summer of 2013, back when David Moyes was their manager. But having stood by their £30.5m release clause, the deal fell through (and they signed Marouane Fellaini instead), only to be revisited by Louis van Gaal a year later. Eventually, Herrera was forced to pay up his own compensation fee for breaking his contract and once again Bilbao’s political stance was heavily criticised, with Old Trafford officials claiming they made the transfer purposely difficult to appease their own supporters.

Athletic Bilbao may instinctively look small-minded or archaic, lost in a world that is moving at a rampant speed away from them. But their supporters would argue, with good reason, that it is the rest of us who are lost. To everyone at Athletic, representing the club and the region has a powerful resonance; is intimately connected to what it means to be Basque. Once upon a time, football clubs around the world were like that. Now, in La Liga at least, Athletic Bilbao are the only one left.

Super Cup but for whom?