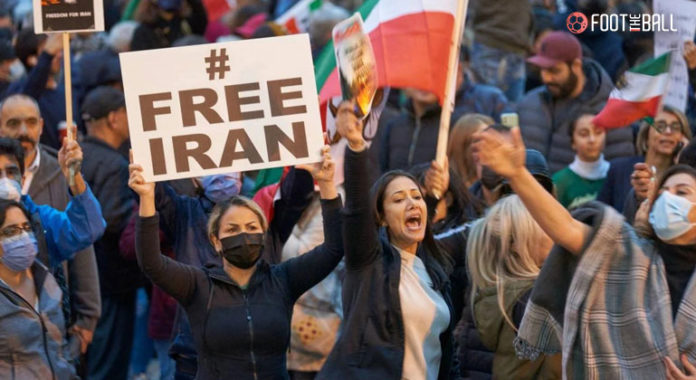 Ever since the death of the 22-year-old Mahsa Amini, the Islamic Republic of Iran has been marred by protests. Amini is believed to have died in police custody in Tehran, the capital of Iran. She was arrested by the ‘Gasht-e Ershad’, Iran’s morality police, for not wearing the hijab properly and later died in their custody.

Her death has launched the biggest protests in the country since the 1979 Revolution. Several women have been cutting their hair and throwing their veils on fire as a symbol of protest against the government. And they have found support from none other than their national football team. Iran, who have qualified for the 2022 World Cup in Qatar, wore black jackets over their national jerseys before a practice match against Senegal.

This is the latest show of support for the protesters from the football world. Several former and current Iranian footballers have already been arrested for supporting the movement.

So, which footballers and clubs have supported the movement, and more importantly, what is the reason behind the protests?

The football world has supported the protesters vehemently, most of whom were Iranian players. Sardar Azmoun, Iran’s best player, has been at the forefront of it. In an Instagram post, the Iranian Messi said, “The ultimate [punishment] is to be kicked out of the national team, which is a small price to pay for even a single strand of Iranian women’s hair. Shame on you for easily killing the people and viva women of Iran. Long live Iranian women!”.

The post was later deleted and replaced with a much more lenient one. His club Bayer Leverkusen had also expressed their support. They were supported by Bayern Munich fans during the two teams’ match recently.

Napoli manager Luciano Spalletti also expressed solidarity with the protesters. The Italian brought two roses for the two women who are among the many that have been killed in the protest.

However, the centre of the protest have been the Iranian footballers. Apart from Azmoun, other players have also supported the movement. Several members of the Iranian national team players have changed their Instagram profile pictures to a black circle. Hull City player Allahyar Sayyadmanesh has also publicly spoken for the movement.

Ex-footballer Ali Karimi, also known as the Asian Maradona, has thrown his weight behind the protesters. The former Bayern Munich player urged the Iranian army to side with the people and stop the bloodshed. Another former player Hossein Mahini has been arrested in Iran following his support of the movement.

The Indian G.O.A.T. Sunil Chhetri: What to expect from the FIFA Docuseries

What is the Iran protest movement?

It all started when 22-year-old Mahsa Amini was arrested in Tehran as she exited a subway station. Under Iranian law, a woman must cover her head with a hijab. Not doing so can result in fines, jail times or both. However, Mahsa Amini was wearing a hijab but was still arrested as the ‘Gasht-e Ershad’ officials deemed she had not worn it as per the government guidelines.

Amini was then taken to the Vozara detention centre. Her brother Kiaresh Amini who was arrested along with her, was initially assured that she would be released. However, by the evening, Amini was dead. The government has said that she died of a ‘heart attack’ and brain seizure’.

However, there were visible marks of beating on her body, as said by her cousin and the Amini’s inmates at the Vozara. Her death has caused widespread protest across Iran. The demonstrations have witnessed women cutting their hair and setting their veils on fire.

Women rally without hijab in ‘Vali-Asr’ street, one of the main streets in #Tehran#Mahsa_Amini

And Iran’s government has dealt with the protest with a heavy hand. According to the government’s figures, 41 people have died, but human rights bodies think the actual number is much higher.

Iran President Ebrahim Raisi has said that though Amini’s death saddens him, protests which are causing chaos will not be tolerated.

Iran had barred women from attending games ever since a hardline government combined with elements of democracy and theocracy came in 1979. In fact, the previous protest that rocked Iran had football at the centre of it.

Explained: Athletic Bilbao only-Basque policy which is going strong even after 110 years

On March 12, 2019, Iranian side Esteghlal faced UAE side Al Ain in the group stage of the AFC Champions League group stage. And one woman supporter of Esteghlal decided to go to the match by defying the government ban. Sahar Khodayari used makeup to disguise herself as a man.

It was a dangerous move, and her luck ran out as the stadium security identified her. Later that year, she was informed she would face prosecution. Khodayari was distraught so much that she set herself ablaze. She incurred 90 per cent of body burns and died a week later.

While the government tried to alleviate the situation by stating that no charges would have been brought against her, the damage was already done. After that, thousands of protesters would march across cities in Iran. In fact, the current protest is, in some ways, a loosened extension of the one that began in 2019.

In 2019, 29-year-old Sahar Khodayari died from setting herself on fire after being told she faced a prison sentence for disguising herself as a man in order to watch her favourite football team. (17/25)

Several women killed in the current protest were famous in their own right. For example, 32-year-old mountaineer Ghazale Chelavi was shot dead by police in the city of Amol. Another is Tik Tok star Hadis Najafi met the same fate in the town of Karaj.

This heavy-handed government response has caused many, including Iran fans, to urge FIFA to oust the national team from the World Cup. Even the national team’s gesture of wearing black jackets is seen by some as observing a Shia Islamic festival rather than showing support for the movement.

As for all those who have died, there comes to mind a Persian funeral saying, Gham-e âkharet bâshe. (My condolences. I hope we see you in happier times. May it be your last sorrow.).