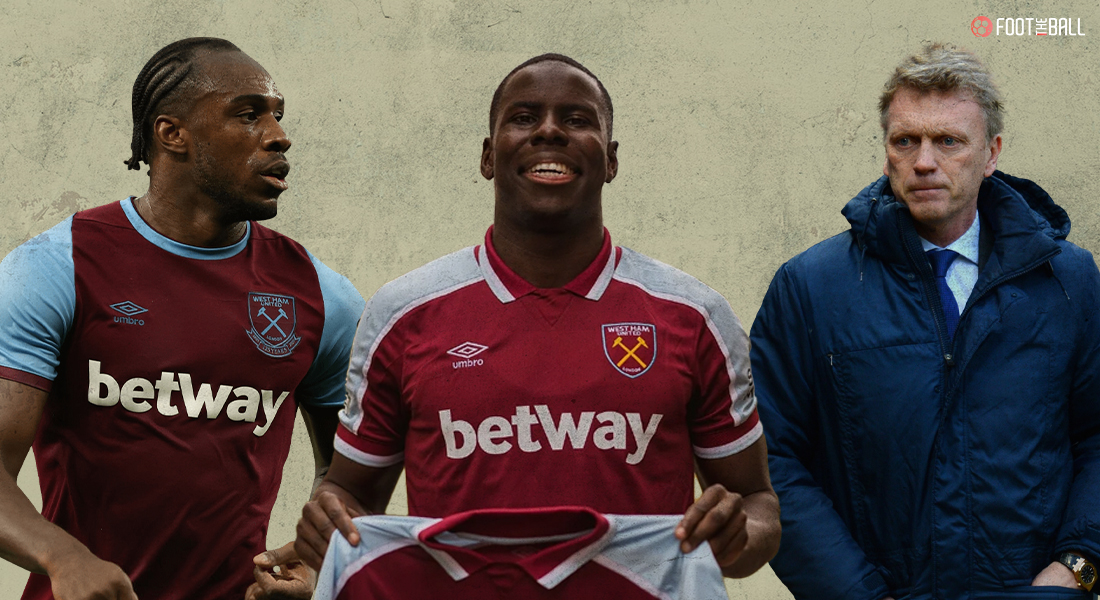 Kurt Zouma made his long-anticipated move to West Ham United finally as Chelsea now set their eyes on landing Jules Kounde from Sevilla.

The France international moved from Stamford Bridge to the London Stadium in a deal worth £25 million after making 36 appearances for Chelsea in the 2020-21 season and helping them win the Champions League.

West Ham United’s manager, David Moyes was all praise for the French defender and was quoted saying “[Zouma] is a player we have tracked for some time, and we have taken great care and diligence to make the transfer happen. He was always our first choice and I’m very happy that he’s now our player”

With West Ham United cruising on top of the Premier League, FootTheBall takes a look at how David Moyes has transformed the Hammers to become like the Everton side that he managed for more than a decade.

The Scot was the manager of Merseyside club Everton from 2002 to 2013 and his time at Goodison Park was characterised by the Toffees consistently punching above their weight in the Premier League.

And this is something that the current West Ham side is replicating in the English top-flight. The Hammers have, at the time of writing this article, started the season on a mission to prove that last season’s finish in Europa League places was no fluke, already dispatching a more fancied Leicester City 4-1.

And Kurt Zouma’s signing is another statement of intent that West Ham shouldn’t be taken for granted when compared to their comparatively more ‘illustrious’ rivals like Chelsea and Arsenal in London.

Chelsea are still negotiating with Sevilla for Jules Koundé.

Zouma will be joining up with Thomas Soucek and Vladimir Coufal at the back for the Hammers to further beef up the physicality factor in this West Ham side, a trait famously associated with Moyes’ Everton sides.

It is hoped that the Frenchman’s arrival will help in shoring up defence as West Ham are currently the side with the worst defensive record amongst the top 7 teams in the Premier League.

For Moyes, the most important factor when it comes to building a team is the sense of team spirit or esprit de corps and this West Ham side personifies this facet in a quintessential manner.

ESPRIT DE CORPS MOST IMPORTANT FOR THIS WEST HAM SIDE

One of the foremost examples to demonstrate this point is the role of West Ham’s forward Michail Antonio. The England international became West Ham United’s all-time top goal scorer in the Premier League last week after a brace against Leicester City.

The fact that he was moved up top by David Moyes only 18 months ago makes this feat all the more commendable on the part of the former Nottingham Forest player. Antonio’s versatility has always been seen as his Achilles’ heel as he always looked out of place.

But, this time he has been able to make the position of centre-forward his own after the switch in December 2019 when Moyes took over West Ham United a second time after Manuel Pellegrini’s dismissal.

On the other hand, Felipe Anderson was shipped out by the Scot after he managed to score only once under Moyes’ tutelage in London. The Brazilian was first loaned out to Porto and this summer completed the move to his former club Lazio in the Italian capital of Rome.

Said Benrahma has quietly emerged to slot in the place vacated by Manchester United’s Jesse Lingard as West Ham continue unruffled in the Premier League even after the departure of the former Leicester City player.

The Hammers are a side that no one would take for granted, particularly after their strong performances in the opening 3 gameweeks in the Premier League. And now with Kurt Zouma’s arrival, they have a genuine chance of challenging for a top 4 finish alongside fellow hopefuls Leicester City.

A strong team spirit, where the team was more than the sum of its parts, was a hallmark of Moyes’ Everton and a similar sense of camaraderie is in the works here.

THE WAY AHEAD FOR WEST HAM UNITED AND DAVID MOYES

On the field until now this season, the Hammers have not suffered defeat and the arrival of Kurt Zouma will only strengthen their resolve to finally break into the top 4 come the business end of the season.

With Moyes at the helm at the London Stadium, West Ham have transformed as a side and now look like a team that can cause an upset to any of the ‘Big Six’ sides on their day as things start falling into place for the Hammers.

The project that Moyes is heading looks like the real deal to West Ham supporters who have given the Scot the moniker of ‘Moyesiah’.

To top it all off, Kurt Zouma’s £25 million signing will only serve to reinforce their belief that they can compete with the elite of the English top-flight and can even emerge as winners.

And it will be interesting to see the London club embark on a new era in its history as they prepare to upset the ‘Big Six’ sides in the new season after having spent the majority of the time on the fringes in the Premier League. For Moyes, he is finally getting the respect that was lost in some quarters after some unsuccessful spells after leaving Everton. Things have now come full circle as he restores his reputation through “Evertonisation” of West Ham United.