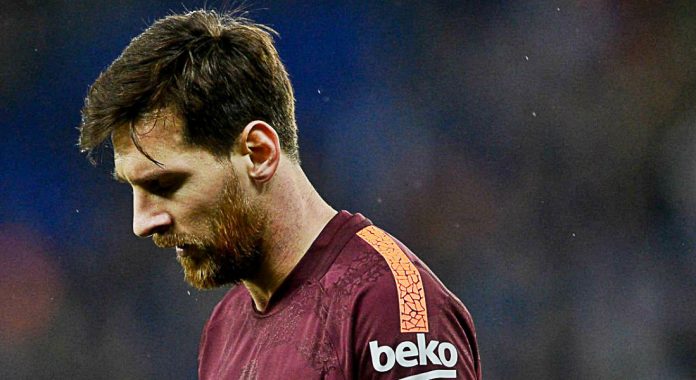 Espanyol substitute Oscar Melendo scored the only goal of the game to give Espanyol a 1-0 win in the first leg of their King’s Cup tie at home to FC Barcelona and to end Barca’s club record run of 29 games without defeat.

Melendo side-footed home from inside of the Barca area after a team move involving Victor Sanchez, Gerard Moreno and Marc Navarro in the 88th minute to leave the Cup holders no time to react.

Barca coach Ernesto Valverde looked to give a chance to fringe players despite the importance of the game with Aleix Vidal, Denis Suarez, Lucas Digne and young striker Carlos Alena all in his starting 11.

Nevertheless Barca controlled most of the ball in the first half with Leo Messi looking to lead his side’ s attacks, although the visitors failed to carve out many clear chances.

Paulinho had to leave the pitch 10 minutes after halftime with an apparent foot injury and was replaced by Ivan Rakitic shortly before Luis Suarez replaced Alena.

Messi had a great chance to put Barca ahead in the 62nd minute after Sergi Roberto was fouled in the Espanyol penalty area, but Diego Lopez got down low to his left to save his spot kick.

Rafinha came on as a substitute for his first appearance since April 2017 as the game got increasingly bad tempered as Barca keeper Jasper Cillessen had objects thrown at him from the stands.

The Barca keeper tipped over a Marc Navarro free kick in the 83rd minute, before Melendo scored his goal which leaves Barca with work to do in next week’s return leg.

Elsewhere Valencia came from behind to take a narrow 2-1 advantage against last season’s beaten finalists Alaves.

Ruben Soriano put the visitors ahead in the 66th minute, but Goncalo Guedes equalized in the 73rd minute, although Alaves keeper, Sivero will think he should have done better.

Atletico Madrid suffered a surprise 2-1 defeat at home to Sevilla. Diego Costa put Atletico ahead with 17 minutes remaining, but an error from Atletico keeper Miguel Angel Moya, saw him palm a cross that was going wide, into his own net with 10 minutes remaining and Joaquin Correa gave Sevilla a surprise win with just two minutes left on the clock.

It is the first time that Sevilla have won away to Atletico in 10 years and they are the first Spanish side to defeat Atletico in their new ground.