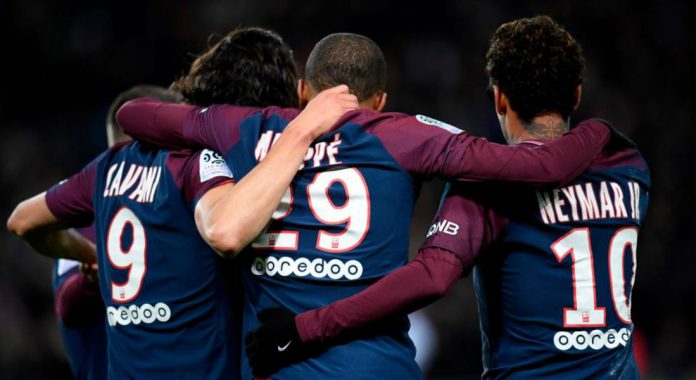 Uruguayan striker Edinson Cavani became the joint top scorer in Paris Saint-Germain’s history with his 156th goal in all competitions in PSG’s 8-0 demolition of Dijon on Wednesday.

The 21st round of Ligue 1 saw PSG star Neymar score four goals in his return from injury. But the story was about his striker partner. Cavani equaled Swedish forward Zlatan Ibrahimovic’s club record in the 21st minute after he nodded home Angel Di Maria’s cross.

Before this, the Argentine winger finished a brilliant left-footed shot just four minutes into the match, before comfortably putting Neymar’s cross into an empty net.

With three minutes remaining before the break, Neymar, who was absent from last Sunday’s match due to rib problems, saw his free-kick leave Dijon goalkeeper Baptiste Reynet stranded in front of the goal line.

PSG’s attack showed no sign of slowing down after the restart. Neymar took advantage of Dijon defender Cedric Yambere’s mistake to put the hosts beyond reach. Neymar’s hat-trick was completed in the 73rd minute, as he broke down Dijon’s defense to find the target.

With four goals and two assists, Neymar became the first player to have been involved in six goals in a single match since Ligue 1 data first started being collected in the 2006-07 season.

Lyon moved up to second position on league table, following a 2-0 away victory over Guingamp. Skipper Nabil Fekir broke the deadlock with his 15th goal of the campaign, already the most prolific season of his career. Houssem Aouar scored in the second half.

Lyon lead Marseille by one point and defending champions Monaco are one point behind in the fourth place. Lyon will host PSG on Sunday.

Saint-Etienne was in a totally different scenario as they had to swallow a 3-0 defeat to bottom of the table Metz.