WE TRIED, BUT FAILED 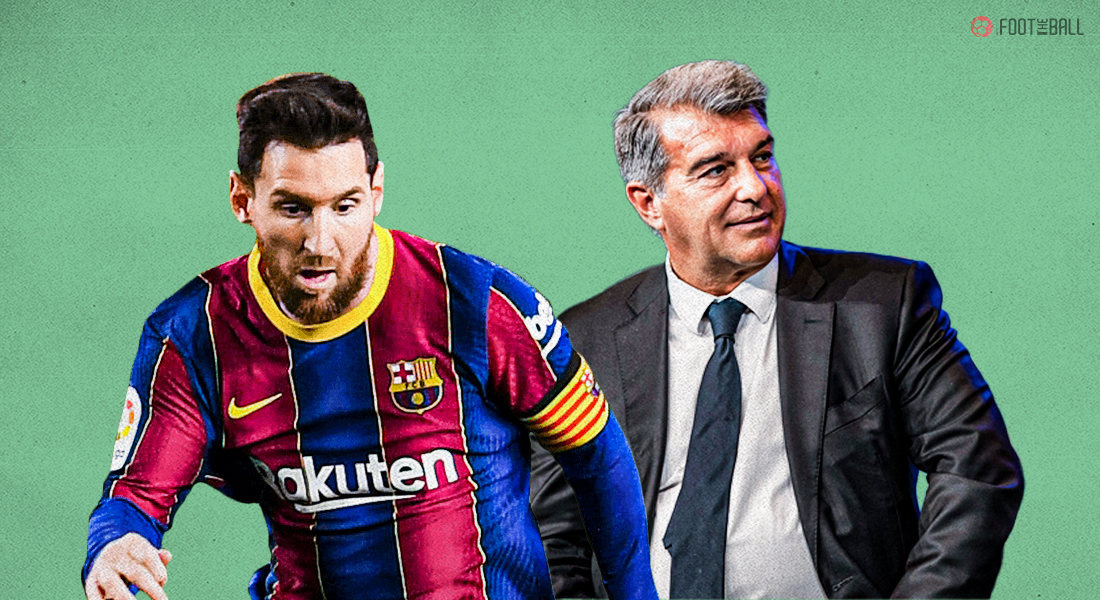 Not everyday fans get to hear stuff like one of the greatest players of all time, is on the verge of leaving their beloved club. Last night news broke out that, Barcelona icon Lionel Messi has decided to part ways with FC Barcelona after just days when it was revealed he was set to extend his contract.

This without a doubt sent shockwaves in the football world, with the Argentine spending almost two decades playing professional football with the Catalan club.

Joan Laporta who recently took over from former President, Josep Maria Bartomeu, went live for his press conference to clear the air with Barcelona fans and fans all around the globe.

A SUMMARY OF THE PRESS CONFERENCE

Laporta revealed that the contract extension was all set to be signed by Messi but collapsed due to the spending caps of La Liga. The CVC investment was also bought into light by the Barcelona President, where he mentioned committing to a bond of 50 years is not feasible on any level for the club, and he is in no place to decide the fate of the club for the next 50 years.

Laporta went on to say, he is thankful for Messi that all he had done for the club, but also, made it clear no player is bigger than the cub; not even Lionel Messi.

He threw the slightest of hints where he mentioned, a calamitous situation brought on by the previous board of directors is to partly blame for. Also, that,  terminating contracts and salary reductions were the only way to cope with the league’s spending caps.

Laporta once again made it clear he always wanted the Argentine to stay and Messi wanted the same, but again, the spending caps were a huge stumbling block in their way. Laporta also mentioned that the six-time Ballon d’Or winner has already had offers from foreign clubs.

The Barcelona President hoped, that, the league could be a bit more flexible with the rules, but the current set of players and bad decisions meant, Messi could not continue with the club.

Lastly, Laporta added a personal thought, that he is sad with the departure of his star but also proud that he did everything in his power for Messi to stay.

Barcelona president Laporta about Messi: “Financial numbers and losses are worst than expected. Our salary mass is not leaving any margin. Financial Fair Play is also blocking us. I can’t make a decision that could destroy the club, Barça are the most important thing”.

“We can’t register the contract of Leo Messi that was agreed because of Financial Fair Play rules. Unfortunately, we have received an inheritance in which we have no margin with the salary current situation”.

“Leo Messi wanted to STAY at Barcelona, he had an agreement to stay at Barça and we wanted Leo to stay. I want to thank Leo’s camp and all people involved in the negotiations. Unfortunately, because of La Liga rules, we can’t proceed”.

“I’m sad but we did everything to keep Leo and he was prepared to stay at Barcelona, it was agreed. A new era starts now without Lionel Messi, we’ll be thankful to Leo”. “Chances to change the situation and re-sign Messi? I don’t want to give fake hopes. We had a deadline because La Liga is starting soon… now Messi can look at other options”.

“We had an agreement with Messi to sign a five-year contract but paying him two years salary. Leo agreed on the contract, it was ACCEPTED. We were convinced it was a good agreement for Financial Fair Play but… it wasn’t allowed by La Liga”.

Barça president Joan Laporta on Messi deal with PSG: “Messi to Paris Saint-Germain and if would I like to see him there? I’d like to see Messi at Barça… ask him, I don’t know about PSG but for sure he has options”. 🚨🇫🇷 #PSG #Messi pic.twitter.com/XnHcRjj7o8

“Negotiations with Leo Messi have ENDED. We can’t register Messi because of La Liga rules, they’re not flexible with us on salary limit. We had an agreement with Leo but we can’t register him. Leo will now look at OTHER OPTIONS, we had a deadline”.

“We had an agreement with Messi and he was helping the club, he made it easy. We had a total agreement and we can’t register it – yesterday we spoke with Leo and his father Jorge about this limit we had from La Liga”.

“We had phone conversations every single day with La Liga and we thought that they were prepared to accept Messi’s contract [agreed with Leo]. So we’ve to look at the reality and we can’t proceed with Messi contract, we can’t put Barça at risk”.

There’s no chance to re-sign Leo Messi in the next days for FC Barcelona, president Laporta says: “We can’t sell fake hopes to our fans. We have to move on. Barcelona Football Club above everything”. 🔴 #Messi pic.twitter.com/gnxbzDioYd

“Leo Messi is NOT happy. He wanted to STAY at Barcelona, as we wanted to keep Messi here. But we can’t change the reality now, I wish Leo the best wherever he will go as NEXT CLUB”.

“If La Liga call and allow you to sign Messi in the next days?” Barcelona president Joan Laporta answers: “We can’t live of dreams. I love dreaming but it’s not the case, we have to talk about the reality. We had an agreement, we can’t register it”.

Barça president Laporta: “According to our calculations, we can register Memphis Depay, Eric Garcia and Kun Agüero. I hope there will be no problems, also because these players made an effort to join Barça”.

With the Lionel Messi era at Barcelona all but over, one thing is for sure, the Argentine, wherever he lands next, would not disappoint his fans or the new fanbase that he would gain from his next move.