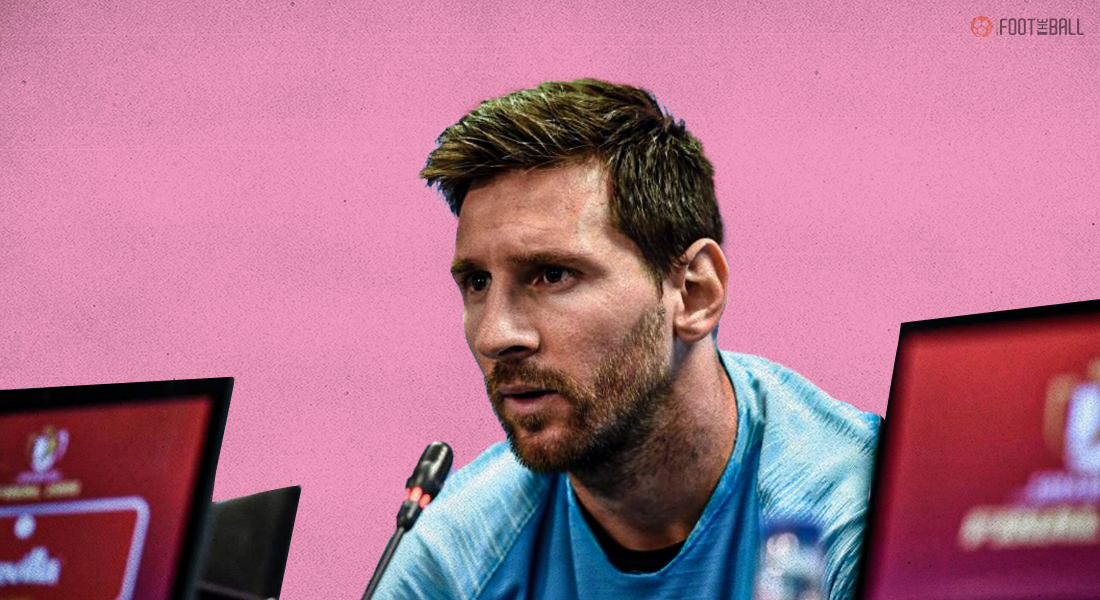 Lionel Messi speaks for the first time since Barcelona announced that he will no longer be part of the club. Watch the live press conference from Camp Nou using this link.

Every football soul in the world is still getting their heads around the departure of the most coveted footballer in the world. A last-minute turnaround that caught the world by surprise. A rather unwarranted goodbye for the legend not only of the club but of the entire football legacy. Lionel Messi calls Barcelona home and it might no longer be the case. Let that sink in!

A clearly emotional Messi began his press conference with tears rolling down his eyes. Stating that he wasn’t ready for the departure, Messi expressed that he would have loved to stay. It was a challenging day for the football world, but an intriguing one as well. Messi made it clear that he was looking forward to the opportunity to stay and that it was unfortunate that he and the club weren’t able to do so.

He expressed his gratitude to the club and all the fans for their support. Messi also mentioned how he would have loved to bid goodbye, in a  stadium full of fans, another unfortunate decision that is not possible due to the pandemic.

Messi also relived his early moments at the club and stated that the start was the most memorable moment of his Barcelona career. His future now though is uncertain. PSG is certainly a possibility that Messi is looking into but nothing is confirmed as of yet.

He also backed President Laporta emphasising that they tried their best to help achieve what both parties wanted, which is for Messi to remain at the club. In fact, Messi said that he was shell-shocked to know that the FFP regulations and the other mess at Barcelona prevented him from doing so. He tried his best to stay, but unfortunately, it did not pan out.

Messi assures that he will remain competitive, irrespective of the club he joins. He has always been motivated to win like he has done so for all these years in Barcelona. Messi leaves without regret and indeed tried his best to stay. He leaves behind a legacy that will live on for aeons. The Barcelona-Messi love story will live on through the surplus memories he has gifted us!

“This is really difficult for me after so many years, being here my entire life. I am not ready for this.” – Messi’s said in his opening lines. Messi could not hold his tears as he stepped onto the stage to deliver his speech.

❝When I made my debut, that was my dream come true … I'll always remember that moment.❞

“After 21 years, I am leaving with my wife, with my three little Catalan/Argentine kids. I can’t tell you everything that we’ve lived in this city.”

“Last year, after the burofax, I knew what I wanted to say. But not this year. This year we thought we would stay in Barcelona. Today I have to say goodbye to all of this. I’ve been here my entire life. I’ve been here since I was 13. After 13 years I am leaving with my wife, with my three Catalan kids. This is our home, and one day we will be back, I have promised my children that.”

Still hard to understand that you will not play for @FCBarcelona anymore. Thanks for everything you have done for our club Leo. I really enjoyed the full season we worked together. I am impressed with your work ethic and desire to win. pic.twitter.com/iRCUpsdoZK

“I’ve been so lucky to live so many great experiences at this club – it has made me who I am today. I gave everything for this club, for this shirt, from the first day until the very last.

“I’m so grateful for the care people have shown me. I’ve never thought of saying goodbye, and I didn’t imagine it like this. We haven’t been able to play with fans in the past year and it’s been difficult to not hear their cheers. I leave the club now without having seen the fans for a year and a half.

“If I had imagined leaving it would have been with a full Nou Camp. But it has not worked out this way.”

After delivering his speech, Messi was obviously bombarded with questions regarding the fallout of the deal, his departure and his future. Questions Lionel Messi would have never even thought he would have ever needed to answer. The first question Messi was asked was about his favourite moment at the club. To which he answered, “It is difficult to choose just one moment. Maybe the time when I made my debut, was my dream come true and everything that came later was amazing. But I will always remember that moment where it all started.”

This is the word of Leo #Messi: pic.twitter.com/k0btQ7k1py

The next question was a lot more intriguing. Upon being asked where his next location would be, Messi pointed to PSG as a possibility. “I had a lot of calls after the press release but nothing has been confirmed at the moment. We are talking about lots of things.”

“Barcelona is bigger than one person. They have a great squad and at the start, it will be weird, but people will get used to it.” – Messi’s response to how Barcelona will be without him.

Leo Messi: “The pic with Paris Saint-Germain was a coincidence, completely. I was there with my friends, we decided to take a photo… they told me: ‘Come to Paris!’ but it was just a joke, we were on holiday”. 🔴🇫🇷 #PSG #Messi pic.twitter.com/aKuh0LXQEd

“The last few years of my career I’m going to fight for titles. I want to win. There’s no doubt that I will leave and join a club that competes with Barcelona. I didn’t want to leave but I want to continue winning.”

Why did the talks break down?  “The talks stopped as Barca did not want to go on, they knew La Liga would not let it happen, it was impossible. As the president explained, the club has debt and we couldn’t do it. I need to be focussed on my career.” He also went on to emphasise that he had done everything possible to take control of the situation, but unfortunately, nothing materialised. Messi made it clear by repeating that he wanted to stay and that the rules and regulations and the financial situation made it impossible for him to do so.