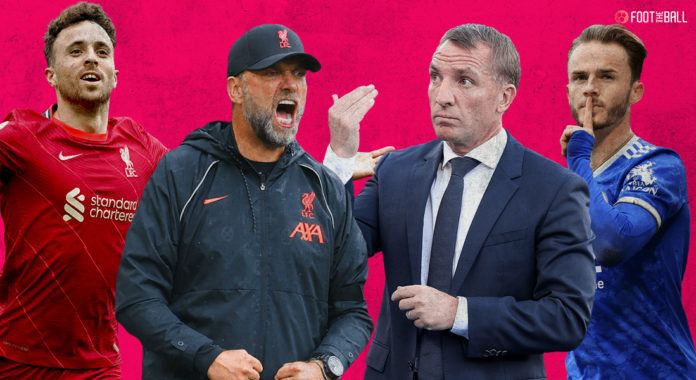 The Premier League action returns in earnest this week with one of the key fixtures being Liverpool hosting Leicester City.

The Reds have won four games on the trot across all competitions since the surprising goalless draw against Arsenal last month. Jurgen Klopp’s men sit second in the table, nine points behind Manchester City with a game in hand. Liverpool know that they cannot afford any more dropped points if they are to claw back the deficit soon.

.@MoSalah could come into contention for our clash with Leicester City, Jürgen Klopp has confirmed ⬇️

Mo Salah and Sadio Mane should return to training before the match which should provide them with an even greater boost. New signing Luis Diaz played well on his debut in the FA Cup while Harvey Elliott scored a screamer in his first appearance since a leg injury last year. Having had a good rest in between their two league fixtures, Liverpool will be raring to go against the beleaguered visitors.

These have been some dark days for supporters of the Foxes. An unbelievable collapse against Spurs at home, with two goals in injury time, felt like the end of the world but was only the tip of the iceberg. A late equaliser to Brighton the next week robbed them of another win before the ultimate humiliation hit home in the FA Cup. A 4-1 drubbing at the hands of Nottingham Forest confirmed it as one of the worst defeats in the Brendan Rodgers era.

He will certainly need to liven his team up if they are to have any hopes of avoiding another loss at Anfield. Patson Daka is a fine goal scorer while James Maddison is imperious right now. If the defence could be sorted out in time, they can put up a good showing and move up from their current position of 10th.

Mane and Salah would be raring to go but it remains to be seen how much training they could get. The rest of the team pretty much selects itself nowadays.

Jamie Vardy’s absence is a big blow regardless of his age. The defensive frailties mean Daniel Amartey has to start in defence once again.

In the absence of two of his strike partners, Diogo Jota has brilliantly shouldered the goal scoring responsibilities in the past month, alongside the ever-reliable Bobby Firmino. He has been an efficient finisher, and produced a goal and assist against Cardiff City last time, with more goal contributions definitely coming soon.

A classic @DiogoJota18 header to open the scoring for the Reds 👌 pic.twitter.com/eIzUlv3bIw

His 15 goals in all competitions hold him in good stead to kick on and score again this time. The Foxes have shown a vulnerability against players with quick feet inside the box, which Jota is.

Moreover, he is also an adept shooter from distance and has also helped in creating 24 chances so far. Jota will also look to play across the front line, drawing the defenders out of position and setting up shooting chances for his teammates. Liverpool have brilliant quick players who can exploit the fragile backline.

In the absences of Vardy, the onus has been on Maddison to be at his highest creative self and unlock the Liverpool defence. Nine goals and seven assists in a renaissance of sorts over the past few weeks has firmly put his early season struggles behind him.

Maddison is a top-class facilitator who can turn the ball from defence to attack very quickly. Furthermore, he has an arsenal of skills in his repertoire including dead ball mastery, long-range shots and accurate passing.

Liverpool do love to get forward most of the time, which will certainly give Maddison time and space to pick his option. If Leicester can overpower the three-man midfield, Liverpool’s defence will be under the pump due to excellent players alongside Maddison.

Even without their leading marksman, Maddison will have enough runners around him to score. His versatility in playing across different positions of midfield and attack

This seems like Liverpool’s game for the taking, given the current form of the two sides. Klopp will be desperate to keep the winning momentum going while Rodgers just wants to lift the mood around his side. FootTheBall predicts a 2-0 win for the Reds.