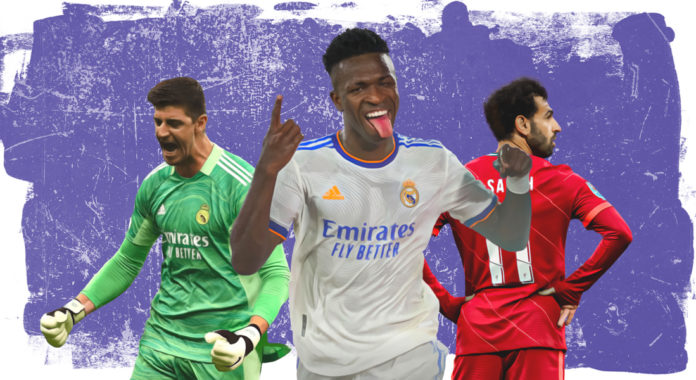 The most important match of the European club season was riddled with problems in the lead up to the start. Several Liverpool fans had trouble entering the stadium, which caused a 36-minute delay.

Once it did kick off, it was a to-and-fro affair right from the start. Both teams were going forward when the opportunity presented itself. Liverpool were getting the better chances, Mo Salah drawing a sharp low save from Thibaut Courtois. Seconds later, it was Salah again, testing the palms of Courtois.

Sadio Mane had the best chance, his fierce shot forcing Courtois to dive to his left and push the ball onto the post. Mane was causing problems, getting into dangerous areas with Eder Militao needing to put the block in. Madrid were hardly moving forward, with Karim Benzema being starved of service. But not for long.

A long ball over the top found the French striker in behind Liverpool’s defence. Having got into box, Benzema delayed his shot before a goalmouth scramble saw him eventually score. However, the offside flag went up as there was only one player behind Benzema. VAR eventually upheld the call after a lengthy ball. Therefore, the score remained goalless at halftime.

Liverpool were again on the front foot after the break, Dani Carvajal clearing away a dangerous cross from Trent Alexander-Arnold. However, it was Madrid who took the lead just before the hour mark. A fantastic low cross from from Fede Valverde was turned home by Vinicius Jr. Salah tried to cancel the goal out immediately, but his curling shot was pushed away by Courtois.

Salah was thwarted once again by Courtois from a tight angle. Klopp reacted by bringing on Diogo Jota and Roberto Firmino. Salah was having a one-man duel with Courtois, producing yet another save. Liverpool would try their best, but it was not enough on the night. Madrid had their revenge from 1981, and are champions of Europe for the 14th time.

Close but not close enough

Liverpool were by far the dominant side, but Thibaut Courtois was in top form. Salah came close several times, and Mane had the best chances. They were let down by some of their best creative hubs, including Alexander-Arnold and Luis Diaz. The Colombian was especially poor, and could hardly impact the match. Klopp will be disappointed with how poor his biggest stars were. Salah tried his best but it was not enough.

Madrid do it right

It was not the prettiest of performances, but they got the job done as so many times before. Carlo Ancelotti sprung a surprise with Valverde, and it worked wonderfully to limit Diaz. Vinicius Jr. was always dangerous on the break, with Benzema getting through once. However, it would be his sidekick who converted a crisp cross from Valverde. However the man of the match has to be Thibaut Courtois, who pulled off important saves time and again. Ancelotti will be proud of how his boys managed the match and did the job.

The record holders of the Champions League just added another to their collection. Number 14 came in the backdrop of strenuous circumstances in the beginning. However, it will taste just as amazing. Liverpool were good, but not good enough on the night. The way Madrid bulldozed through the competition from brinks of defeat made them deserving of the trophy.