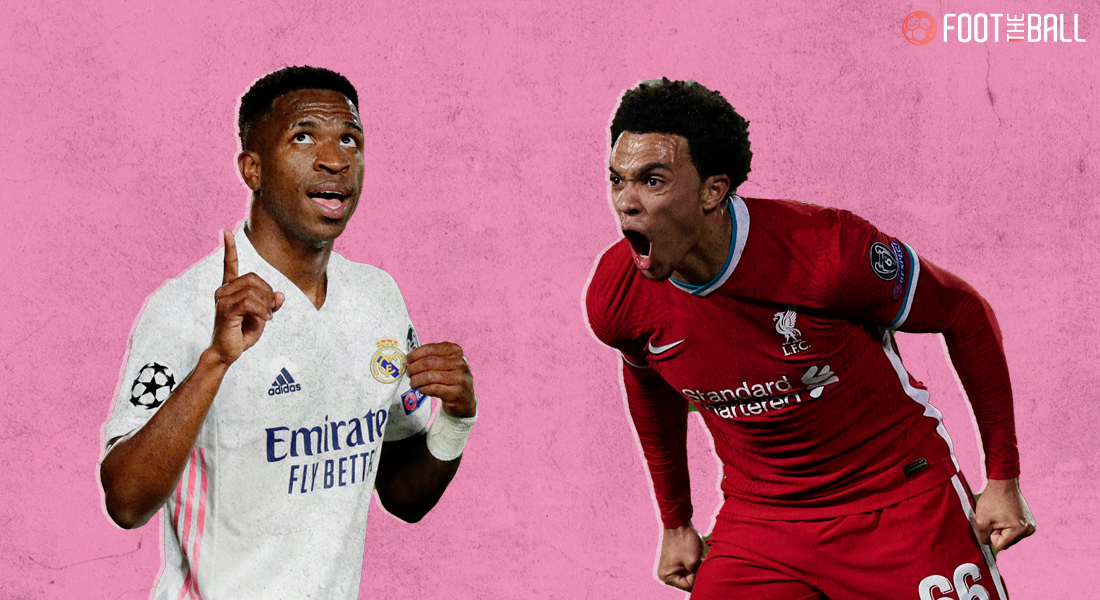 Let’s have a look at some of the talking points from the match that defined each team’s tactics and performance.

Real Madrid looked extremely dangerous in the first half, they were moving the ball quickly and fluently , while Liverpool looked deflated. The team from Merseyside looked nothing like the team from last season and it seemed that the win against Arsenal did not provide enough of a lift for the Liverpool players who have looked out of sorts throughout the season.

Real Madrid had a clear gameplan in the first half. They pressed the ball high something Liverpool were not ready for apparently as their midfielder kept giving away possession in midfield. As soon as Real Madrid got the ball they looked to use the pace and movement to exploit Trent Alexander-Arnold’s defensive frailties.

Vinicius Jr. relentlessly attacked Trent’s wing who had Nathaniel Phillips next to him in the center.

The Brazilian winger kept pulling out wide and drove at Liverpool right back for the first 20 minutes. He exploited the space behind Trent  really well and was getting pinpoint passes from Toni Kroos, orchestrating the Madrid attack with trademark ease.

For the first goal in the 27th minute, Toni Kroos literally pointed where he was going to put the ball to communicate to Vinicius Jr. where he should be. The Brazilian winger obliged he ran from the half-space between Trent and Philips to have a clear run at goal.

'Perhaps Alexander-Arnold needs to be in midfield, dictating play rather than having one eye on the opposition forwards'

Vinicius received the ball on his chest after ghosting past the Liverpool defenders and calmly slotted the ball in the left bottom corner as Allison was left helpless.

Trent Alexander Arnold was conquered, Vinicius had exposed his defensive shortcomings for the whole world to see.

After the restart you could tell that Madrid were in the groove they were maximizing the opportunities that kept coming their way as Liverpool were not being able to even string 10 passes together and Los Merengues looked excellent in tight spaces in the Red’s half.

After a silly give away in midfield  by Liverpool Real Madrid again quickly shifted the ball to Toni Kroos who tried playing in Vinicius again, who was being covered by Trent who read the situation but his attempted header back to his keeper went straight to an on rushing Asensio, who scored Madrid’s second in the 35th minute. Asensio received the ball from the header and lifted it over the on rushing Allison to volley the ball into an open net.

Hard not to disagree #LFC https://t.co/T5n2PUWKrD

Liverpool looked deflated after the second they just wanted the half time whistle to blow but Klopp’s intent was made clearer when he substituted Naby Keita in the 42nd minute and replaced him with the more influential Tiago (who according to us should have started). Klopp was gearing for a barrage right out of the gates.

Liverpool started the second half with a lot more intensity you could tell Klopp had thrashed his side for their sloppy display in the first half.

SOME RESPITE BUT VINICIUS WAS ON 🔥

Liverpool were starting to get into Real Madrid’s face who it seemed were just trying to preserve their two goal cushion, Liverpool’s high press soon paid dividends. Wijnaldum, after  winning the ball back,managed to find Jota who drove at the heart of the Madrid defence   and got a snapshot away from inside the box which was deflected by Eder Militao into Mo Salah’s path.

The Egyptian rifled the ball at Courtois in the 51st minute, the belgian stopper got a hand due to which it hit the underside of the crossbar and the immense power of the shot proved to be enough for Liverpool to cut the deficit in half.

🇪🇬 Mohamed Salah has scored in 4 successive matches in the competition for the 1st time 🔥#UCL pic.twitter.com/lmcoPjeRnP

Trent had recovered slightly after his dismal performance in the first half and he recovered well in a lot of instances to save Liverpool and he kept getting in dangerous positions in the Madrid half trying to whip one of his special crosses for someone to attack.

After Liverpool’s goal the game was end to end up until the 63rd minute. Real Madrid countered again and this time the ball found its way to Modric who put the ball on a plate for Vinicius who got a half decent shot away that went through Philips’ legs. Allison did manage to get a hand to the ball but it was a weak attempt and the ball trundled into the goal and Madrid’s advantage was restored. Liverpool goalkeepers don’t usually show up against Madrid, do they?

🇧🇷 Sum up Vinícius Júnior against Liverpool in one word…#UCL pic.twitter.com/GFo3HTkwS7

The game dragged on a little after that with Liverpool desperately trying to get another away goal and Real Madrid trying to play on the counter and hold their two goal advantage.

Asensio came off in the 70th minute and was replaced by Valverde. In the 80th minute, Klopp tried going all out for the second away goal as he brought off Jota and Kabak for Firmino and Shaqiri who had too little time to get into the groove of the game.

After bringing on Valverde to sure up the defence , Zidane bought on rodrygo for the star of the night, Vinicius Jr.. He was excellent on the day and executed his manager’s game plan flawlessly.

The match ended soon after and now Liverpool go into the second leg at Anfield with a two goal disadvantage, something that would have been of little concern if the fans were there to provide them with some much needed energy.

ASENSIO ON THE ROAD TO REDEMPTION?

Marco Asensio who had fallen from grace after his promising start in the Champions League back in 2017, looked like a man with something to prove. He was seen as an eventual superstar and a possible Ballon D’or winner but injuries have really hampered his progress and has stunted his growth massively over the last two seasons.

But for the last couple of months he is seemingly coming close to his peak fitness and performance he has scored 4 goals in his last five games in all competitions. The fourth being the composed volley against the Reds in this match.

⚪️ Marco Asensio in the knockouts for Real Madrid:

His attacking display was not the only reason that made it seem like he was in flow as he was constantly helping out Vazquez and providing him cover against the likes Mane and Robertson who are known for bombing down the touchline.

It was brilliant to see the former wonder-kid playing well. Hopefully he can fulfill some of his potential in the near future.

All in all it was a supremely exciting match that was tactically contested by the managers and we are pretty sure the home leg would look a lot like the second half of this match, and honestly we can not wait for it.

⚪️ Modrić & Kroos: How good has this duo been for Real Madrid?#UCL pic.twitter.com/0c4XmlSs9Y

We also want to give a special mention to Marid’s midfield trio who were sublime in the game and if Vinicius had not scored a second surely someone out of Modric,Kroos and Casemiro could have taken the man of the match honour. Madrid’s midfield trinity is surely holy.

Los Blancos should be very happy with the 2 goal cushion they take into the second leg at an empty Anfield.Madrid might have an outside chance to win the Champions League this season again, who knows?