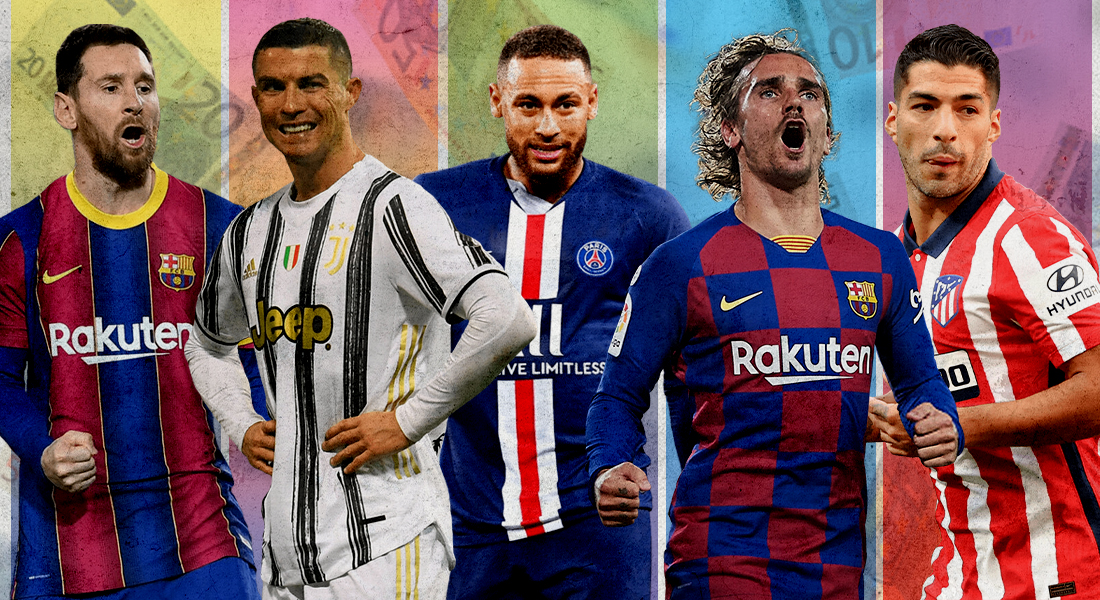 There’s big, there’s the G.O.A.T. 🐐 rivalry and then there is Lionel Messi and his salary at Barcelona.

French newspaper L’equipe has released the figures of the salary that the player earns in Europe and it is huge. Lionel Messi is the highest paid player in the world followed by his rival Cristiano Ronaldo. Messi’s contract was completely revealed also very recently.

When it comes to earning money, Messi has comfortably beaten Ronaldo as he earns more than double of what Ronaldo earns.

The Messi is paid well and earns around 7 million euros monthly, while Ronaldo in the second spot earns 3.8 million euros which is way less than the Argentine talisman. Nevertheless, the amount is high and well deserved as the 2 biggest brands in Football have raised the bar high. The amount for Messi adds up to over 107.6 million euros pre-tax, over a year.

While the Ronaldo earns 46.5 million euros in a year. The top 2 were not a surprise since Messi and Ronaldo are ,two immortals who have reigned over footballing world for the last decade.

I am honored to win the @goldenfootofficial and to be immortalised on the Champion Promenade in Monaco, together with some of the greatest football legends of all time! I am truly humbled and want to thank the fans all over the world for having voted for me #goldenfoot2020 pic.twitter.com/HEWgjDUxgV

HOW DO THE OTHERS COMPARE

The list continues with the Brazilian superstar Neymar on the third. Neymar who plies his trade for Paris-Saint Germain earns 31.3 million euros annually pre-tax.  The Brazilian talisman who joined the French side for a world record fee, arguably changed the way transfer fees worked. Since then, huge amounts in transfers and salaries are not a surprise.

Another record transfer was of the French Wonderkid Kylian Mbappe who earns 21.4 million per year, which is not enough for a top 5 berth in the list of football players who earn more than anyone else in Ligue 1.

Although, it is his French teammate Antonio Griezmann, who ranks at the 4th place behind Neymar. The forward who switched alliances from Atletico Madrid to Spanish giants FC Barcelona, earns about 29.7 million euros pre-tax. Griezmann has had to face difficult times settling into FC Barcelona but it does not stop him from earning a top 5 place in the highest-paid football players list. However, Griezmann is not the only one who earns that amount as Luis Suarez, the ex-Barcelona talisman earns the same amount as the French football player.

It is pretty interesting that the transfers of these two players involve the same 2 sides, Atletico Madrid, and FC Barcelona. Suarez has made himself worth every penny as he is leading the charge for the Rojiblancos’ first La Liga title since 2014.

In the Ligue 1, it is interesting to see that 10 of the top paid players belong to PSG with Wissam Ben Yedder from Monaco being an exception, who earns 6.8 million euros.

When it comes to the Premier League football players, it is the Manchester rivals, City and United who dominate the list. David De Gea, Raheem Sterling, Paul Pogba and Kevin De Bruyne are the players who lead the Manchester list as they earn 18.9m, 15.2m, 14.5m and 16.1m, respectively.

However, it is the Tottenham player Gareth Bale who is the highest paid Premier League player as he earns 25.6 million euros annually. However, it is Real Madrid who pay 60% of that fee.

As we go to the Bundesliga, it is no surprise that the top 5 paid football players belong to Bayern Munich. It is Robert Lewandowski and Manuel Neuer who lead the list, earning 17.4 million euros. They are followed by Leroy Sane (15.3m), Thomas Muller (13.2m) and Lucas Hernandez (11.2m) who complete the list.

In the Italian league it is Ronaldo who leads and he is followed by Roma frontman Edin Dzeko who earns 10.9 million euros. In third place in Serie A’s top earners is Dutch wonderkid Matthijs De Ligt as he accumulates 10.4 million euros. The top 3 are followed by two players from Inter Milan. Romelu Lukaku and Christian Eriksen who earns 9.7 million euros. The duo is crucial for Inter’s title race, as the Milan club try to win their first scudetto since 2009-10.

The football players earn a huge salary through their clubs which are only one of their revenue streams. They also have sponsorship deals which lead up to a big amount.

Although, the list only focuses on the top salaries and it is fair to say that no one is catching up Lionel Messi soon.

Erling Haaland and Kylian Mbappe have been tipped to possess the potential to earn a higher, record-breaking amount in the future as football players. Haaland who plies his trade with Borussia Dortmund is rumoured to leave the club for a ground-breaking amount in the future. Mbappe on the other hand could soon land in the top 5 as he is in negotiations to sign a new deal with the French club Paris-Saint Germain with improved money.

The only two players to score 18 UCL goals before turning 21 🔥 pic.twitter.com/ZkxxuLmcXx

L’equipe also released a list of top earning managers. On the top is Atletico Madrid’s Diego Simeone who earns 36.9 million euros. The Argentine will be looking to win his second La Liga title with Atletico this season. He is followed by Spaniard and City Manager Pep Guardiola who collects 19.3 million from the free-spending Manchester City. His counterparts in the Premier League are next on the list. Jose Mourinho and Jurgen Klopp earn 14.5 million euros. The top 5 is completed by Zinedine Zidane who earns 14.3 million euros.

If you want to know more about your favourite highest-earners in football and their performance, and why their salaries fluctuate check out Bookmakers.eu, for more.