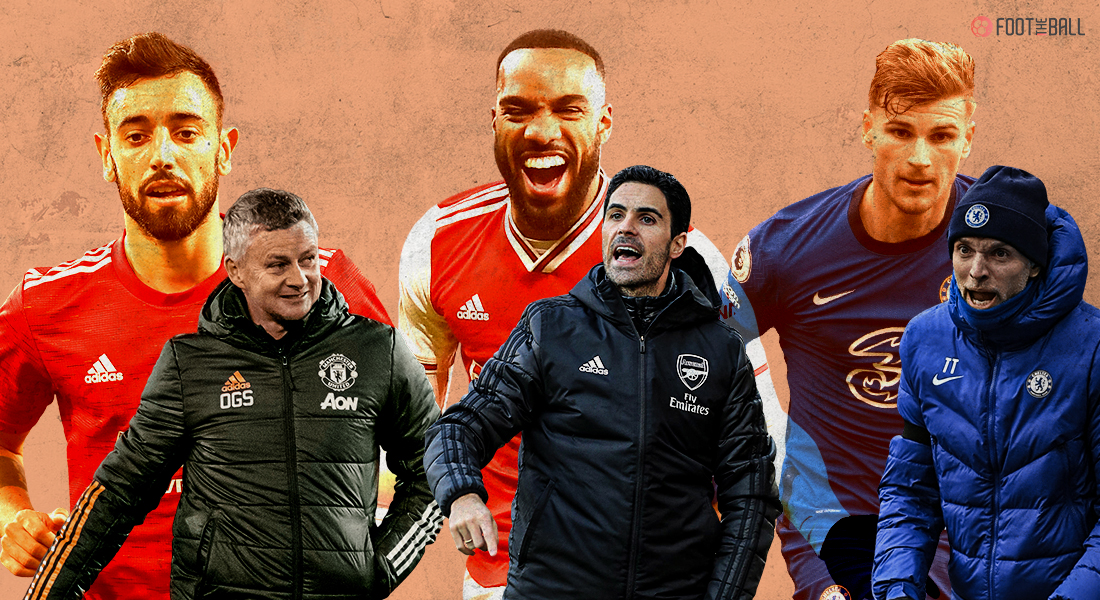 REPORT CARD: HOW THE PREMIER LEAGUE "BIG SIX" FARED IN 2020-21 AND WHAT CAN BE EXPECTED FOR NEXT SEASON

The 2020-21 Premier League season ended with some familiar sights, some surprising sights and one very odd sight. With the champions having been decided at the end of matchday 35, the fight for the Champions League went down to the wire. While Tottenham became England’s inaugural entrant of the new Europa Conference League, their London rivals missed out on continental football altogether. FootTheBall presents the report card of the so called “big six” in this campaign.

Pep Guardiola’s side won another league title but they were far from convincing during the early days. Indeed, City found themselves 9th in the table around the one-third mark of the season. But eventually, the quality of the side was too bright to be put out. They went undefeated from December till March, a run of 16 wins and 2 draws by which point they had opened up a double-digit lead at the top.

In the end, even two losses from their final four games was not enough to stop City from taking the win by a massive 12 point margin. That came as no surprise as the number of top players in their squad were a lot. Goalkeeper Ederson won the Golden Glove, new signing Ruben Dias won the Football Writers’ Association Player of the Year, Kevin De Bruyne had 18 goal contributions (six goals, 12 assists) while Phil Foden established himself as the breakout star of the campaign.

Seven Man City players have scored 10+ goals across all competitions this season:

The 20-year-old racked up nine goals and five assists, firmly establishing himself as one of the finest upcoming playmakers. The strangest fact however would certainly be Ilkay Gundogan finishing as their leading goal scorer with 13 goals. With more additions certain to come this summer, including the possibility of Harry Kane, City have the best chance of repeating as champions once more next term.

The Red Devils finished much stronger than many would have predicted. Though they were no doubt helped by teams around slacking off, Ole Gunnar Solskjaer’s men have formed one of the most deadly trios in attack. That was clearly evident this season as United have scored three or more goals 16 times in the lead. The highlight of the lot was most certainly hitting Southampton for nine in February.

Though they had the same number of losses as City, their 11 draws was the highest in the top half of the table. But there’s much more reason than the runners-up spot only. In Edinson Cavani, Marcus Rashford, and Mason Greenwood, United have a lethal final third which accumulated 28 goals and 14 assists among them. Behind them was, of course, the mercurial Portuguese. Bruno Fernandes has been a revelation since coming to Old Trafford and this season, became the midfielder with the most goals scored in all competitions in the Premier League era (27).

With Luke Shaw returning to his imperious best on the left, Harry Maguire finally emerging as a competent leader at the back and academy graduates gaining valuable game time, it’s certainly looking like the only way is up. If they do manage to get one of their highly valued transfer targets this summer, their neighbours might really find a challenge on their hands in defending their crown.

It has been a miserable season for the most part for the Reds. Jurgen Klopp’s men were tipped to provide a stern defence of their title. What transpired was anything but as they somehow managed to sneak into the Champions League places on the final day itself. Thankfully, it could have been a lot worse for the Reds and their long injury list certainly did not help the cause.

What has happened to Liverpool?! 😳 pic.twitter.com/Y4UJvqIulL

Having been without three of their first-choice defenders for more than two-thirds of the season, Liverpool actually looked to manage quite well. They ended 2020 atop the league and spirits were high of possibly achieving the two-peat. Those aspirations were quickly ended. They lost the first match of 2021 which saw them lose their top spot and then the Anfield nightmare started. Klopp’s side lost six consecutive home games over two months, a new club record. In February itself, they won four matches out of the five played.

That run ended with a 1-0 win away at Wolves that really seemed to spark something in them. The team went on a 10 game undefeated streak including eight seasons to close out the season in style. Mo Salah scored 22 goals with Sadio Mane (11 goals), Roberto Firmino (nine goals) and Diogo Jota (nine goals) ensuring that they would not miss the plane to Europe’s premier competition next season.

Liverpool: Where did it all go right? https://t.co/pjjjDkUAWt

With their key defenders set to return next season, and already signing Ibrahim Konate from Leipzig, Klopp and co. will certainly look to improve a lot next season and be seen challenging for the title once more.

The Blues have had a mixed bag for most parts of the season. With their huge outlay on foreign recruits, fans were expecting a considerable push towards challenging for the title once more. However, with the newcomers taking time to settle, Frank Lampard struggled to find consistency in form.

Chelsea were particularly poor over the winter period, losing five games between December and January. That saw the departure of the club legend who was replaced by ex-PSG boss Thomas Tuchel.

Under the German’s watch, Chelsea have become a defensive behemoth. They conceded only 13 goals in their final 19 games, which saw Edouard Mendy finish as second on the list of most clean sheets kept (16). However, they almost let the Champions League slip away from them on the final day. Having been in and around the top four for a long time, Liverpool’s resurgence meant that Chelsea had to win on the final day to displace Leicester from fourth if the Foxes also won.

Mason Mount created more chances than any other English player in the Premier League this season (87). 💙 pic.twitter.com/x1OZ7o3Fl4

The Blues would go down 2-1 to Aston Villa, but with Brendan Rodgers’ men also losing, Chelsea were assured of playing Champions League football next year. Mason Mount has been the best player for Chelsea, with his creativity and skilful play helping the side tick in midfield as well as seeing become the Englishman with most chances created (87). Mount has six goals and five assists for the term while the much-maligned Timo Werner is the Blues’ leading assists provider with eight.

Having got a season under their belt, Tuchel will be confident of his squad being able to put up a much more sustained fight for Europe. Though the title race might be a bit out of reach, if Harry Kane does come to Stamford Bridge, all bets are off regarding what this side can really achieve.

Where would Spurs be without Harry Kane? The 27-year-old achieved the super-rare feat of having the most goals scored (23) and most assists provided (14) in the same Premier League season. It is safe to say that with such a calamitous backline, the trio of Kane, Heung Min Son (17 goals, 10 assists) and old boy Gareth Bale (10 goals, two assists) were the only reason why Spurs even managed to finished to finish in the top half of the table.

Jose Mourinho’s side started the season well, even occupying the summit in early December. Their run of one loss from their opening 12 games was only bettered by Liverpool in the league. However, inconsistent form and a terrible first two months of 2021, where they lost five out of their eight games in January and February, saw them fall way behind the Champions League places. With too much ground to cover up, their patchy play led to Mourinho’s sacking in late April.

Assistant coach Ryan Mason picked up three wins and two losses from his five games, including a crucial 4-2 win over Leicester City on the final day. That meant that Spurs will play in UEFA’s newest cup competition next season, but the problems for Daniel Levy are aplenty in this offseason. He needs to hire a new permanent manager, and even more importantly, needs a way to sort out the whole Kane transfer saga.

It is understood that Kane has asked for a transfer, which if completed, will certainly leave the club in the doldrums for next season. Levy is adamant to keep his star man till 2023 and it is shaping up to be one of the most interesting tales of the upcoming transfer market. If Kane does leave, it will not be possible for Levy to replace his quality given the financial conditions around the world which will just mean another season of pain for their fans next term.

St. Totteringham’s Day did not arrive, which was quite certainly the only piece of good news the club was waiting for. It has simply been a shamble of a season for Mikel Arteta and co. After winning the FA Cup and FA Community Shield, hopes were high of this squad finally returning back to the Champions League. What transpired saw the Gunners miss out on Europe completely for the first time in 25 years.

Arsenal won’t be playing in Europe next season for the first time in 25 years.

They qualified for Europe in each of Arsene Wenger's 22 years at the club. pic.twitter.com/YM36kTV55b

Arsenal suffered 13 losses this term with only Leeds (15) suffering more in the top half of the table. Eight of those came in 2020 which all but sealed their fate of a top-four finish. Though they finished the season with four consecutive seasons, Arteta will be feeling the pressure of righting this sinking ship as soon as possible. His credentials have been questioned many times across this campaign, his players’ form did not help either.

Nicolas Pepe now has 14 goals in his last 18 starts.

It's taken a while, but he has well and truly arrived. pic.twitter.com/yOYZj59yau

Pierre-Emerick Aubameyang, Alexandre Lacazette and Nicolas Pepe combined for 33 goals only, as the Gunners have the worst scoring record in the top nine. With below-par defensive options and star signing Thomas Partey having a mediocre season due to injuries and poor form, it was left to the academy graduates to take centre stage. Bukayo Saka, Emile Smith-Rowe, Gabriel Martinelli have all impressed well during their appearances and look set for bigger roles next season.

We absolutely need to build around these players. The future is brighter fro Arsenal than many people may think. pic.twitter.com/phPvhEVVOO

The rot of Arsenal does not look like it is going to get better any time soon. With a lack of big-name signings, falling credibility in convincing top players and current players who are just not up to the mark necessary, it looks set to be another season of pain for the fanbase unless something truly dramatic happens in the transfer market.