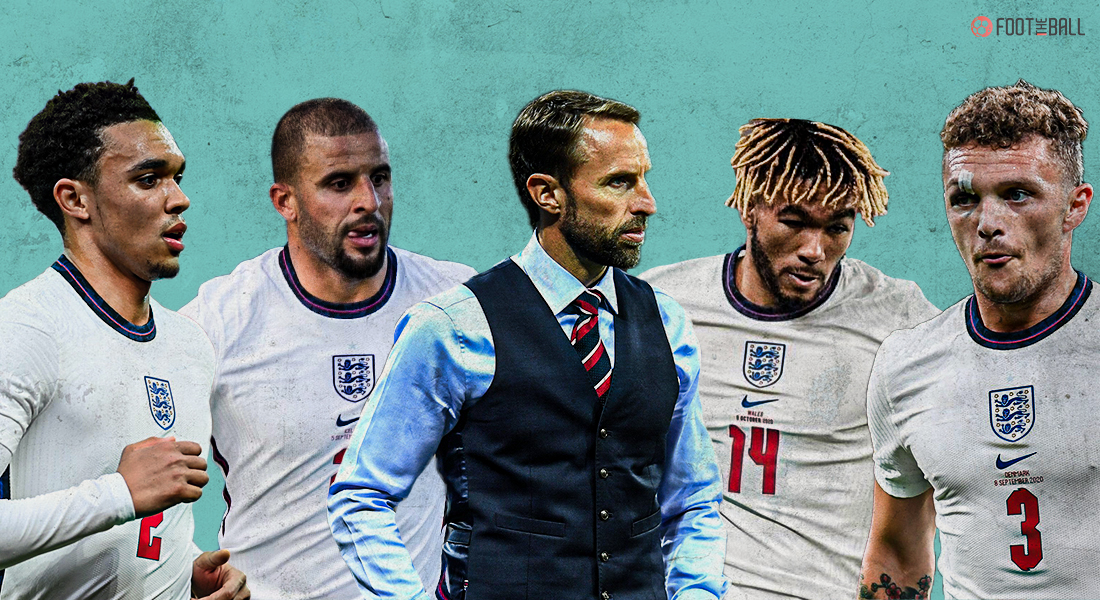 This summer’s European Championships are almost upon us. Managers are frantically trying to decide the best 26 players to take with them. There will be loads of happy tears and more than a few sad ones. However, one particular manager’s choice for a particular position on the pitch is dominating headlines. That is, of course, Gareth Southgate and his plethora of right-backs.

You have two spots in your England squad at right-back, who do you choose?

Why? Because England are spoilt for choice when it comes to this area. The manager is under a microscope for the Euros as it is. The Three Lions have a squad packed with young generational talents which has to translate to on-pitch success. With the perennial “it’s coming home” chants at the ready, it is time to look at all the available options at right-back and who will be on the plane this week.

The Manchester City player is the most experienced of the lot. Walker has played fantastic levels of football for a decade in the Premier League. He is known for his pace and ability to intercept passes played down the flanks, with a passing accuracy of 90% in the Premier League this term. Furthermore, Walker has also World Cup experience having been deployed as the centre back by Southgate in his three-man defence in 2018.

That kind of flexibility will come in handy once again. Walker has the knack of going forward in support of the attack but is also more than handy at tracking back. Another facet that he has shown over the years is his ability to put in tackles on opposing wingers to stop them in their tracks. Surely, he will be chosen among the 26 players for the tournament based on his veteran status and familiarity with the manager.

STATUS: Will be called up.

The first-time La Liga winner, Trippier really came into his own in 2018. The World Cup saw Trippier establish himself as one of the best crossers and passers in the team. His deliveries from the right were widely perceived as top-notch and he had the knack of placing the perfect balls for the attackers to feed on. He even ended the World Cup having created the most number of chances (24) in the tournament aside from scoring from a wonderful free-kick in their semi-final match against Croatia.

Kieran Trippier becomes the 88th player to win a trophy after leaving Tottenham, in the time since Spurs last won a trophy. #LaLiga | #AupaAtleti pic.twitter.com/lpTfqAxdOU

The 30-year-old has kept improving in Spain since that. He provided six assists for Diego Simeone’s side this term and created 40 chances for his teammates from his favoured wingback position. His inclusion in the squad may be a little harder to call but it will be no surprise if Southgate does decide to go with the ex-Spurs man for a big competition yet again.

The 23-year-old is the only player on the list yet to appear for the senior team. However, his defensive performances have been top-notch since his move to the Red Devils in 2019. He has a combined 128 interceptions in the two seasons since, including a club-high 62 this term. Wan-Bissaka is a master at using his legs to stretch and claw the ball away from the feet of opponents, a feat that has left many a player frustrated in matchups

96 – Aaron Wan-Bissaka led all players in the Premier League for tackles made in 2020; indeed, this is the third consecutive year where Wan-Bissaka has made the most tackles of any defender in the competition (99 in 2018 and 133 in 2019). Fearsome. #OptaReview2020 pic.twitter.com/MlmN93dJfN

Considered the least attack-minded of the lot, Wan Bissaka is mostly seen making overlapping runs down the flanks. Though he enjoyed his most fruitful season in terms of goal contributions (two goals, four assists), the Euros might be too important a competition for Southgate to take a fresher in his squad.

The Chelsea youngster has seen his stock rise exponentially over the past two seasons in the Premier League. Normally deployed as a right wingback, James is known for his marauding nature while attacking down the wing. His deliveries into the box and speed with which he moves have seen him become an established regular in the Blues squad, even relegating captain Azpilicueta to the bench at times.

Reece James' performances at RCB will not have surprised anyone who watched him at youth level.

And they may have guaranteed his place in the England squad for #Euro2020.https://t.co/H2VM1ukact pic.twitter.com/Pb7P8WZi2t

Chelsea boss Thomas Tuchel has also deployed the 21-year-old as the right-sided centre back in his team recently. This seems like a good move as James has often been criticised for neglecting his defensive work in favour of joining the attack. Thus, he is not seen as someone who will give defensive solidity at the back for Southgate’s side unless he were to start as centre back which seems unlikely. Though he might just get the call up at the expense of the next guy as it happened two months ago.

STATUS: Likely to get called up.

No player in this list has garnered debate more than the Liverpool right-back. His surprise omission from the World Cup qualifying squad in March has seen his Euros future get questioned a lot. Despite all of this, Alexander-Arnold is one of the most accurate passers and set-piece takers operating in the Premier League currently as evidenced by his seven assists this term (most by a defender). Amid rumours of Southgate not seeing him as his ideal type of player, the speculation will continue to rage no matter his selection status.

Are you Team Carragher or Team Neville?

Should Trent Alexander-Arnold start for England at the Euros?

Known for his attacking instincts and speed, the 22-year-old has already played in two Champions League finals. His maturity continues to show while playing, with his reading of the game and ability to run tirelessly being two important aspects of his play. While he may be chided for spending too much time up the field, there is no doubt that if Southgate does go with wing-backs this time, Alexander-Arnold definitely has to be the first choice starter.

STATUS: Should get called up.