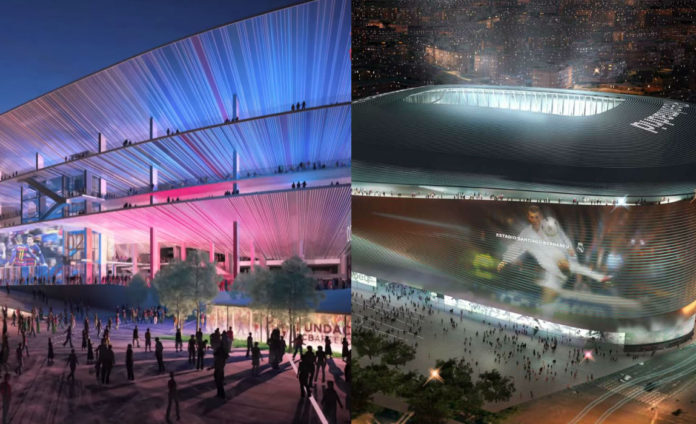 Real Madrid and Barcelona are not just heated rivals on the pitch but off the pitch too.

The Spanish duo are always looking to get one over each-other, be it on the field or off-pitch antics.

The season is yet to witness it’s first El Classico but it looks like none of the team is ready to wait for the match to get the better of the other, as weeks after Barcelona got the permission to expand Camp Nou, Real Madrid have also made the announcement.

Japanese firm Nikken Sekkei along with Joan Pascual and Ramon Ausio Arquitectes from Catalonia have won the contract to re-design the Camp Nou.

German architect firm GMP Arckitekten will re-design the Santiago Bernabeu along with Catalan, yes Catalan designer companies L35 and Ribas&Ribas. Oh and the surprise is not yet over, Ribas&Ribas are Barcelona membership holders.

Not a chance, the Catalan giants will stay put at the same spot, just minutes away from the famous Avenida Diagonal.

Why would they? Real currently sit in the center of the Spanish capital, why would they move the Galactico’s to a new location.

Sorry Madridistas, the seating capacity at the Santiago Bernabeu will stay at 81,000. 3,000 new seats will replace old seats but the capacity won’t change.

Re-designing Camp Nou will cost just over €390 million, but ad to that the cost for the adjoining Espai Barca, where the Barcelona Basketball team plays and it will cost the Catalan club around €600 million.

It is expected that the re-designing of the Santiago Bernabeu will cost the Los Blancos around €400 million.

The Los Blancos have been going easy in the transfer market lately and this resulted in the club registering a profit in this summer’s transfer window. Real are also on the lookout for stadium sponsors, and Spanish oil company Cepsa have emerged as the favorites for the deal.

And work starts when?

Barcelona are all set for the work to start and the expansion will start as soon as the current season ends.

Work could start by May 2017 at the Santiago Bernabeu with Madrid having already addressed all the oppositions of the local residents. Also president Perez’s construction firm will not be a part of the bidding process.

A new Basketball venue will be built on the Mini Estadi with 12,000 seating capacity, while the B-team will start playing at the training ground.

The Camp Nou will remain roof-less but the club has promised that the seating areas will remain dry even when it rains.

Four new digital scoreboards are also to be added.

Real are planning to go all high-tech with the new design, as a retractable roof is being added to the Santiago Bernabeu.

An all new 360-degree digital scoreboard will be added around the boundaries, while the steel casing of the Bernabeu will project pictures of present and former players on the neighboring Chamartin.

Museum is also expected to be expanded as all the offices are to be moved to the training ground.