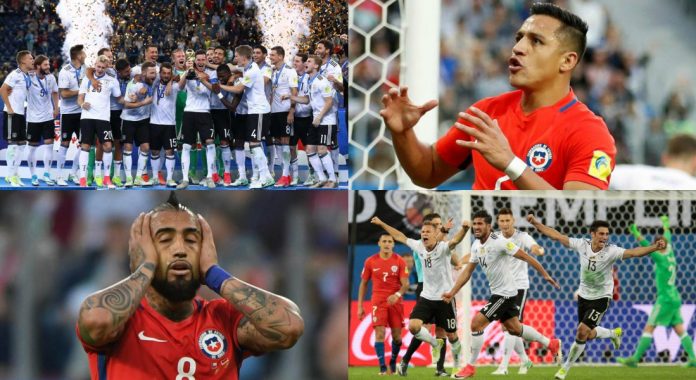 Germany won their first Confederations Cup trophy after outplaying Chile 1-0 on Sunday at the Krestovsky Stadium.

Chile looked positive right from the kick-off, but missed golden opportunities as Arturo Vidal was unfortunate on certain occasions.

Barcelona goalkeeper Marc-Andre ter Stegen displayed sublime form as he denied Vidal in the fifth minute from close range, before the Bayern Munich midfielder launched an effort from distance but missed the target two minutes later.

Ter Stegen showed why he deserves the NO.1 spot in the Germany squad after denying  Eduardo Vargas in the 13th minute after Leon Goretzka lost the ball, before stopping Vidal again in the 19th minute.

Chile had another chance to open the scoring in the first-half when Alexis Sanchez had the ball in the box but the Arsenal contract-rebel failed to find the net from six yards out.

Chile dominated the earlier half of the game but lacked precision on the final ball. However, the 2014 World Cup winners were waiting for their chance like a leopard does before pouncing upon its prey.

Lars Stindl scored the opener for Germany in the 20th minute by tapping the ball into an empty net from inside the six-yard box.

Germany shifted the gear and stepped up the gas after finding an early goal. They had three chances to make it 2-0 in the first half but they blew up their chances. First Goretzka failed to find the net from a difficult angle, before Julian Draxler’s effort went inches wide of the bottom left corner.

Goretzka almost scored his fourth goal of the tournament in the 45th minute, but Man City goalkeeper Claudio Bravo kept the ball out.

Draxler threatened the Chile defence early in the second half after opening up space in the box before firing a shot towards goal but it was deflected just wide by the leg of Gonzalo Jara.

Jara was lucky to have seen only a yellow card in the 65th minute after he elbowed Werner in the face. However, the referee Milorad Mazic didn’t consider it as a red card offense despite watching the tussle on the VAR system.

Vargas had a golden opportunity to clinch an equaliser in the 74th minute but his venomous drive went right down the middle of the goal.

Vidal again failed to find the net in the 76th minute as ter Stegn stopped his close range effort before Sanchez was denied seconds before.

Sanchez had a last chance during the fag end o the match but his free-kick was thumped away by Ter Stegen.