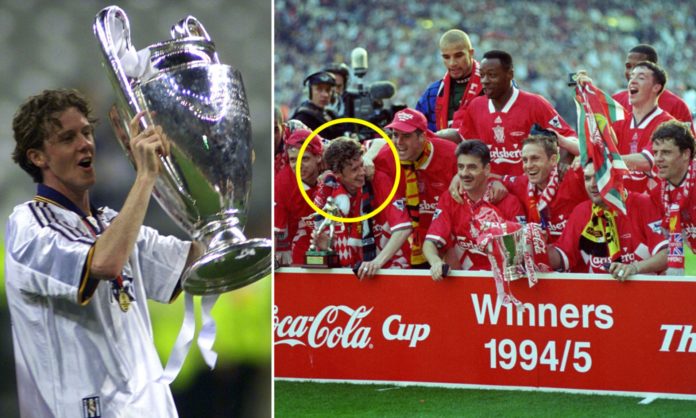 Liverpool legend Steve McManaman is no stranger to the Champions League, or European Cup in his time. Liverpool remain one of the most decorated teams in the UEFA Champions League and McManaman played some great matches in their success, albeit in domestic honours, like the League Cup and FA Cup.

Best of Liverpool and Madrid

The combined XIs are a major part of the buildup to any big game and McManaman wasn’t to be left out. Unsurprisingly, McManaman’s combined XI was heavily tilted towards Liverpool. From choosing Alisson Becker over Thibaut Courtois, and continuing that trend with picking Konate over Alaba, McManaman’s team has nine Liverpool players to two from Real Madrid. Only Luka Modric and Benzema were able to make it from Real Madrid.

“He’s at the moment in his career where everything he touches turns into gold,” McManaman said of Benzema’s inclusion in the squad.

He said Alaba playing various positions over the season led to him picking Konate over Alaba. Thiago also missed out. “We don’t need Thiago when we have got Luka Modric,” McManaman said.

Zinedine Zidane’s iconic volley in the 2002 final against Bayer Leverkusen is widely believed to be the greatest UCL goal of all time and McManaman agrees. He played with Zidane during that time and had some interesting things to share.

“I think it’s fair to say that his first six months of joining the team were difficult. It was just a question of just where he would play on the pitch in the system we played. He played a number of positions and struggled to settle initially,” McManaman said.

If not the greatest, then certainly a contender for the best ever in a Champions League final. Zinedine Zidane’s volley against Bayer Leverkusen in the 2002 edition is about as iconic as a goal gets. pic.twitter.com/lCxbtY2Q7K

However, the UCL nights proved to be the turning point. McManaman says Zidane always turned it on under the bright lights of UCL and that iconic goal was an exclamation mark on his season.

“I remember because it came out of nothing! I think the average person would have controlled it but he decided to hit it with his so-called weaker left foot. He caught it really nicely. He was one who could hit it from a great height because he had done it many times before,” McManaman said.

“He was ever so graceful. It was not a surprise that it went flying into the net,” he said.

There are not many things bigger in football than winning the Champions League. Steve McManaman experienced that winning feeling twice with Real Madrid.

“They (Real Madrid) had a relationship with the European Cup/Champions League because they have won it so many times, since the era of Gento, Puscas or Di Stefano. You were hit with the fact that you have to win trophies,” McManaman said.

And win trophies he did. He became the first English player to win UCL with a non-English club, scoring in the 2000 Final.

“The goal came out of nothing. A long throw got cleared in the air and I just nipped in front of my marker. I hit it really nicely and the goalkeeper was a little bit unsighted so it flew in,” McManaman said.

Steve McManaman scored this beautiful volley against Valencia in the #UCLfinal

An iconic moment on the greatest stage 😍 pic.twitter.com/lEaAei3Poc

McManaman was never a big celebrator of goals but he ran towards his dad after scoring it and in his words, “You could almost enjoy the last 20 minutes knowing that you’ve won the game”.

One of McManaman’s former teams is definitely going to experience something like that special moment come the night of the final. If McManaman’s recollection is anything to go by, that feeling is unforgettable.

Feature image credits are with The Daily Mail