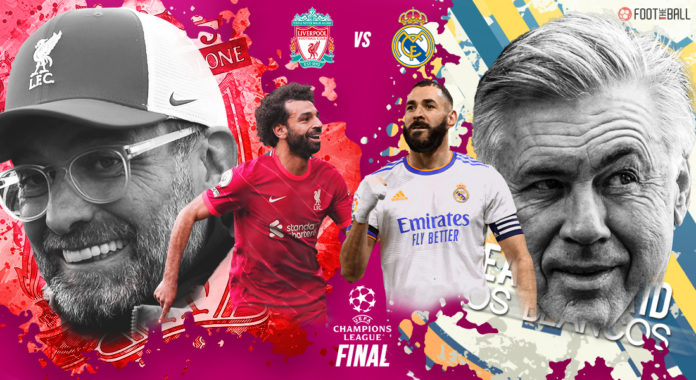 The mother of all games in European club football. Six-time winners Liverpool face off against 13-time record-holders Real Madrid at the Parc des Princes. The 2022 UEFA Champions League final is now.

The Reds have had a thoroughly dominant season, winning the Carabao Cup and FA Cup. Moreover, they finished just a point behind Manchester City in the Premier League. The hopes of an unconventional treble are still alive after Liverpool saw off Villarreal in the semis. Jurgen Klopp has orchestrated a monstrous turnaround in this team with excellent players.

Sit back, relax and enjoy all of our goals on the road to Paris 😍⚽#UCLfinal pic.twitter.com/czwvcV7dlI

The traditional front three of Roberto Firmino, Mo Salah, and Sadio Mane have been upgraded with the additions of Diogo Jota and Luis Diaz. Ibrahima Konta has shown himself to be a world-class acquisition. The fullbacks Trent Alexander-Arnold and Andy Robertson are the best in providing support to attackers. Moreover, their pressing game and high-tempo play will pose a grave threat to their opponents, an expert in this competition.

Real Madrid have had a rollercoaster ride to the final of the Champions League. The 2021/22 La Liga champions turned the game around PSG in the second half of the second leg through a hat-trick from Karim Benzema. They survived an onslaught from Chelsea in the second leg of the quarter-finals. Finally, Los Blancos defeated Manchester City in extra-time, with big help from Benzema again.

The French striker is having a career year, with Vinicius Junior a superb sidekick. Carlo Ancelotti is no stranger to setting records himself and has proven himself to be an extremely wily tactician. Once again, he will rely on the old guard of Luka Modric and Toni Kroos, with Casemiro screening the defence. Therefore, Madrid have the aces ready, against a side they destroyed in 2018.

Fabinho and Thiago’s status for the final is dicey, given their recent injury concerns. There could be some interesting calls in who starts in attack.

Madrid have a fully fit squad to choose from and should field their best XI.

What a season Sadio Mané is having. Make that 22 goals in all comps 🔥🔥🔥#UCL pic.twitter.com/sMPDVrCI0M

He has developed his playmaking skills to play centrally has been a great boon for Liverpool. Moreover, Mane can drop wide with ease and his versatility will be key in troubling Madrid’s defence. Therefore, his connection with Mo Salah and Luis Diaz will be essential in bombarding the Spaniards.

The Ballon d’Or candidate who blazed through competition. Karim Benzema has been on song in 2021-22, scoring from all angles and against all opponents. Therefore, it was no surprise to see him rack up the goals in the knockout rounds. The opposition just do not know how to handle the energetic, charismatic player who always seems to find the net.

Moreover, with Vinicius Jr. in full flow, Benzema’s play goes up another level. Ancelotti has chalked out a plan to feed the Frenchman the ball. Additionally, Madrid have two excellent playmakers in Luka Modric and Toni Kroos, who will keep supplying Benzema from all areas.

The finale of this epic tournament is poised to be just as engaging as the games before it. Moreover, Liverpool and Real Madrid have a lot of history in the Champions League and the final, specifically. The Reds took the trophy in 1981, and Madrid got their revenge in 2018. Therefore, the third encounter will settle the debate. FootTheBall predicts a 3-2 win for Liverpool.