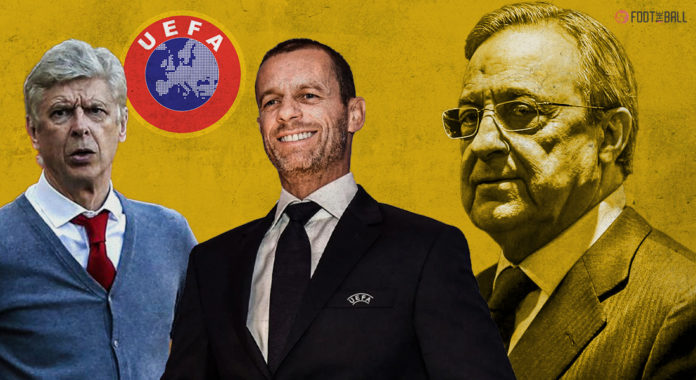 A popular saying goes, “if it ain’t broke, don’t fix it.” Well, UEFA seems to have missed the memo. The European football federation is back with its latest “updates” to the Champions League format from 2024 onwards. Never mind the fact that nobody asked for it or is unsure of what to expect, UEFA is ploughing on.

🇪🇺@UEFA have approved the suggested @ChampionsLeague format from 2024 season onwards:

Just over a year out from the collapse of the European Super League, these new rules mildly evoke the memory of that ill-fated plan. There’s been plenty of unrest regarding the so-called “Swiss model” as UEFA decides on its next step. Suffice to say, the whole affair will not be going away any time soon or quietly.

The proposed plan has many layers. The first and foremost is the increase in the number of matches. Currently, there are 125 matches in a single season of the Champions League. UEFA is proposing the expansion of the competition from 32 to 36 teams. Moreover, each team will play 10 matches in the group stage against opponents based on UEFA’s coefficient. At the end of it all, the top 16 teams will advance to the next round.

Media reports suggest that the expanded Champions League would deliver an additional 40% revenue in TV and commercial rights. Based on 2020/21, that would increase the income for finalists, #CFC and #MCFC, from around £107m to just under £150m. Again widening the gap to others. pic.twitter.com/NBTjuKl3Uh

Here, the top eight teams will qualify directly for the round-of-16, while the next eight teams will battle to join them. However, teams are worried about how this will affect their domestic fixtures. The possibility of having Champions League matches on weekends will be great. Clubs are trying to get the number of matches reduced to eight for each team so that the total comes to 189.

UEFA are reportedly planning to reform the Champions League starting 2024.

How many games are too many games? pic.twitter.com/KF3xz73eU8

If UEFA gets its way, there will be 225 matches per season of the Champions League, which will clash with domestic ties. Moreover, broadcasters will not feel incentivized to pay large sums of money for the media rights since they have to show every match.

The coronavirus pandemic had forced organizers to get creative to finish the footballing season. UEFA staged the quarter-finals, semis, and the final in Porto for over a week, with only a single match for the former two. This plan is set to return. UEFA is in intense discussions over a ‘final four’ format for the last stages of the Champions League.

UEFA president Aleksander Čeferin says a Champions League 'final four' format could be on the way: "We haven't yet discussed this properly because of the pandemic.
But my opinion is it would be great.
It should be more competitive and more interesting for the fans" [JDD] pic.twitter.com/CmN9LpRAtY

Therefore, there will be no two-legged ties in the semis while all three matches will happen in a single city over a week. UEFA is trying to bring in a festival of football with celebrations and live performances.

So far, reasonably good. Premier League clubs have talked with UEFA regarding the 10-match group stage, which will cause an even more congested fixtures list. If that gets reduced to eight, it will still be reasonable.

However, the most divisive point in this exercise has been surrounding the original expansion. Two out of the four teams will qualify based on past successes in the Champions League, the “historical coefficient,” if they miss out on automatic qualification.

This is where the problem starts. Critics have rightly pointed out that reserving two places for teams in this manner will strengthen the hand of the Premier League, which already has four clubs.

Read also: The pros and cons of a biennial FIFA World Cup

Manchester United and Arsenal are the two clubs best placed to take advantage of this rule change. These sides were regular in their heyday but have since struggled.

😳 With only three matches left, #ManchesterUnited are three and five points behind Tottenham and Arsenal, respectively.

Therefore, adopting this change will distinguish the chances of other deserving teams based on a season’s performances. Moreover, there is also worry that the influx of top teams without merit will echo the European Super League.

Granted, there has been no discussion regarding creating a separate structure, but this kind of reservation feels a bit on the nose.

Needless to say, any changes to a current system will have strong reactions. There have been reports that UEFA is planning to scrap the idea of “historical berths.”

The uproar caused by it has been palpable. Nevertheless, the rest of the plan looks set to be passed. The finances of the game have taken over in almost all aspects.

There is growing confidence UEFA will be persuaded to drop plans to award two Champions League places based on historic performance from 2024 with fears it would lead to six Premier League clubs regularly in the competition.

Therefore, it is no surprise that UEFA is taking little steps to increase revenue from the game. There is little regard for player welfare, or the fact that an increase of 100 matches will have an excruciating toll on teams.

No doubt there will be strong views from most of the footballing community, but as is the case, there is little heed paid to them.