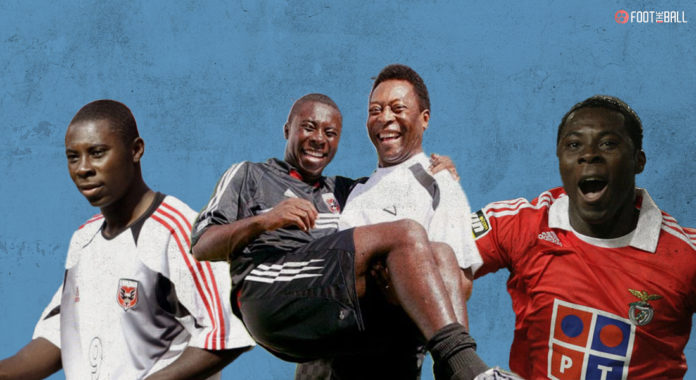 Most 14-year-olds daydream about the goal of the weekend in science class. Most 14-year-olds have, at one point or another, at least thought about breaking an XBOX or PlayStation controller in a FIFA-induced fit of rage. Most 14-year-olds do not start their professional football debuts and, in doing so, become a true global sensation. But Freddy Adu, at 14, wasn’t like the rest.

On January 16, 2004, Freddy Adu made headlines around the world when he was picked first in the MLS Super Draft by DC United. He was 14. The Ghana-born attacking midfielder had moved to the US in 1997 and swiftly became the great hope of American soccer. Comparisons to Pele soon followed, but Adu failed to live up to the immeasurable hype, playing for 15 clubs in nine different countries.

The American was destined for greatness. He was a household name and a Championship Manager legend. Former wonderkid Freddy Adu is now 33, without a club and staring at the last knockings of a career full of ‘what might have beens’.

But there will always be a place in footballing history for him. Let’s take a look back and remember the tragic career of, and lessons learned from, the original modern-day wonderkid. Whatever happened to Freddy Adu?

What happened to Freddy Adu

The original golden child exploded on to the scene in America when he was just 14 when he was signed by MLS giants DC United. Then, at the same age, he became the youngest scorer in US professional football with a goal against New Jersey MetroStars, who later became the New York Red Bulls. That prompted Nike to snap Adu up on a $1million (£730,000) sponsorship deal, while ESPN said he was a better sporting prospect than LeBron James.

The Ghana-born midfielder played in a total of 30 matches during his rookie season, and then in 25 and 32 games in the next two seasons for one of the oldest franchises in MLS. During his three years in D.C., Adu was named to the MLS All-Star team on two occasions (2004, ’06) and was responsible for 11 goals and 17 assists.

Even Brazilian legend Pele compared the prodigy to Mozart for displaying such an incredible ability at such a young age. However, Adu’s career soon became a disappointment – with the pressure of being America’s great hope too much and expectation becoming a burden.

He was surely destined for greatness and had captured the attention of Sir Alex Ferguson and Manchester United who invited him for a trial in 2006. But it wasn’t Man Utd who Adu signed for. Instead, a series of bad moves saw him leave DC United for Real Salt Lake and then Benfica, he opted to join Monaco on loan. The decision to join Monaco was described as the worst mistake of his career.

“The biggest mistake I made in my career was leaving Benfica on loan to Monaco,’ Adu told The Blue Wire Podcast in 2020, as reported by The Mail. “I say it from the heart. It was one of those decisions that, if I could take it again, I wouldn’t make it.

“I had three coaches in a year in Benfica. The club was in such a dysfunctional moment that I just wanted to get out of there and go the other way as soon as possible, but it turned out to be the worst decision.

“I joined the club at the same time as Di María. In the first year, I was better than him. I played better than him, but I decided to leave for Monaco on loan. And Di María stayed at Benfica. And guess what? He had the chance to play with a coach who later came and became a starter.”

After a bright start with Benfica, Adu spent the next three years out on loan, and never fit in at Monaco, Belenenses, Aris or Caykur Rizespor.

During his time as a vagabond in Portugal, Greece and Turkey, Adu never made more than 13 appearances in a single season and left the continent with just seven goals to his name. While he was struggling in Europe, Adu played sparingly for the United States with his landmark performances coming in the 2011 CONCACAF Gold Cup, a tournament that many were shocked to see him in given his questionable club status.

Despite all of his troubles in Europe, Adu was handed a lifeline by the Philadelphia Union in August of 2011. In his first season with the Union, he played a part in the club’s two playoff games, as well as 11 regular-season clashes.

Ten goals and three assists in his 41 Union matches from 2011 to 2013 weren’t enough to reignite his career, however, and the 22-year-old was let go. Adu joined Brazilian side Bahia in March 2013, where he lasted just four games before having to find another club. The American started embarking on trial periods around Europe – including Blackpool and AZ Alkmaar – but could only secure a contract with Serbian outfit FK Jagodina in 2014.

After just one appearance for Jagodina, the American international went on to endure failed spells at Kuopion Palloseura of Finland, Tampa Bay Rowdies and Las Vegas Lights – both of the USA’s second tier. The final club of his sorry career saw him sign for Osterlen in the third-tier of the Swedish league. He left without playing a single minute in 2021 while the club accused him of lacking the fitness and mental strength to return to his best and cancelled his contract within a month.

Where is Freddy Adu now

So, what’s Adu up to these days? A glance at his social media accounts suggests he’s hung up his boots and taken up coaching as he looks to help players fulfil their talent – something he was unfortunately unable to do.

A lot of pressure and expectation was heaped onto Adu at the age of just 14 and there aren’t many people who would have thrived in that situation. It all proved too much for him but we shouldn’t forget that he still enjoyed a career that most of us can only dream of. After all, he was capped by the United States on 17 occasions.

The story of Freddy Adu is a tragic one. He was nothing more than a boy with supreme footballing talent, thrown into the world’s view with minimal preparation. His Hollywood-style introduction into professional senior environments in his early teens rather than letting him progress at his own pace was probably a factor in his stifled development, and severe media pressure certainly was.

It takes so much more than just talent to achieve greatness in professional football. You need luck and incredible mental strength to even get close. It wasn’t to be for Adu.