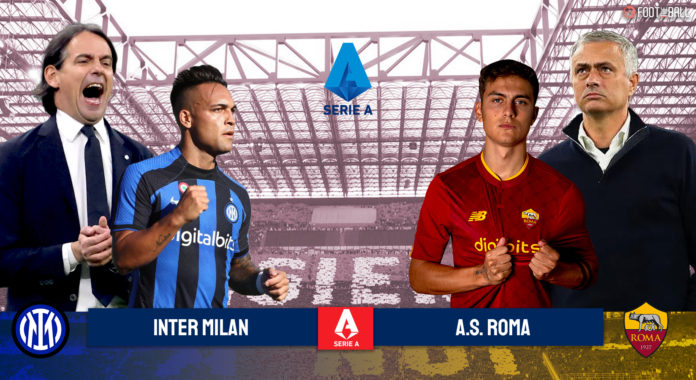 Inter Milan vs AS Roma preview

Across the top five leagues in Europe, the Serie A title race  is by far the most competitive. Furthermore, three of the top four, including champions AC Milan are currently not in the top four. Thus, every match between the top seven holds high importance now. Under such circumstances, Jose Mourinho’s AS Roma travel to the San Siro to face Inter.

Both sides are desperate for a win knowing that three points will catapult them into the top four. However, just before the international break, Roma lost a vital home game to Atalanta. This is despite them having 21 shots at the goal versus five from Atalanta. To make matters worse, Jose Mourinho was sent-off after clashing with the referees.

On the other hand, Inter Milan are a point behind AS Roma. Simone Inzaghi’s men have lost three matches, but all have come against top teams and that too on the road. However, such has been the cruelty of the fixture list for the Nerazzurri that they will now face their fourth top team in their eight matches. However, unlike the previous three, this comes at home, which could turn around their fortunes.

For Roma, it is the lack of goals that will be worrying Mourinho. The team could not score against Atalanta despite having so many chances. Paulo Dybala has been the best offensive player in the league on the Expected Offensive Value Added (xOVA) metric. The team has decent forward options who need to come back in form quickly.

Like every season, Lautaro Martinez has been the leading man in the attack, while Nicolo Barella and Hakan Calhanoglu have shared the creative responsibility. And with Milan Skriniar staying at the club, the defence is one of the best in Serie A.

Simone Inzaghi came close to winning back-to-back titles with Inter last year but lost to a Zlatan Ibrahimovic-inspired Milan. This season they have the added boost after signing Romelu Lukaku, whose devastating partnership with Lautaro Martinez brought Inter a Serie title.

Moreover, Romelu Lukaku has been sidelined with a muscle injury. However, Inzaghi told the media that the Belgian will return in time for the match. In addition, Hakan Calhanoglu is also sidelined, while Marcelo Borozovic was also injured on international duty with Croatia.

Inter Milan vs As Roma
Bayern Munich vs B. Dortmund
Arsenal vs Man Utd
Liverpool vs Everton
Lazio vs AC Milan

Jose Mourinho brought Roma their first title in 14 years by winning the UEFA Conference League. And over the summer, they also signed Paulo Dybala, Andrea Belotti, and Georginio Wijnaldum. However, Stephan El Shaarawy has been injured, with Wijnaldum and Dybala joining him on the treatment table.

Thankfully, Dybala and El Shaarawy are expected to be back for the Inter match. And the duo will need to contribute goals if Roma are to come with anything from San Siro.

Lautaro Martinez has failed to score in the last three Serie A matches, so Lukaku will need to chip in with goals straight away. The best performer for the team has been Nicolo Barella, one of the top performers on the Expected Threat (xT) metric. Milan Skriniar and Alessandro Bastoni have also been brilliant in defence and have two intelligent goalkeepers, Samir Handanovic and Andre Onana.

Nicolò Barella has now been directly involved in four goals in his last four Serie A appearances:

He opens the scoring after just five minutes against Udinese with a superb free-kick . ⚽ pic.twitter.com/GUC0fQScuL

AS Roma have perhaps their best squad in years that could land a serious Serie A title challenge. With Dybala and El Shaarawy returning, Mourinho could expect an increase in goals that they desperately need. However, Smalling is also an essential player in how he commands the team’s defence.

Inter Milan vs AS Roma prediction

Before the start of the season, any reasonable person would have guessed Inter and Roma to be in the top four. However, dark horses Udinese and Atalanta have surprised everyone by putting the top teams in a spot of bother.

So, this match assumes to be much more important than it usually is. AS Roma and Inter Milan come into the game far from perfect form. But the home form has been influential in the league, and Inter Milan could benefit from that.