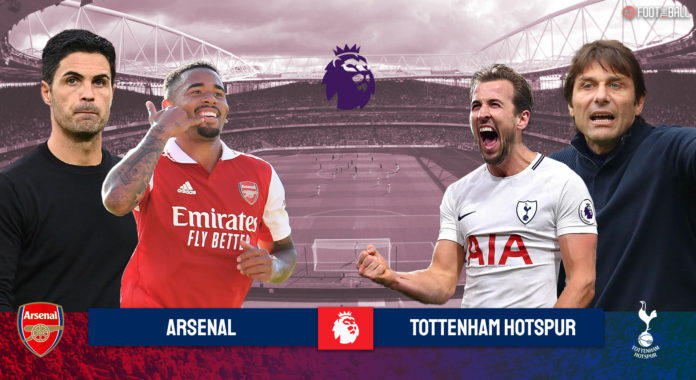 Football has always been defined by specific rivalries or derbies. While every match is essential for a team playing in a league, some games bring in extra motivation for the players. For example, there is the famous El Clasico between Real Madrid and Barcelona, the Der Klassiker between Bayern Munich and Borussia Dortmund, and the Milan derby. The North-London derby between Arsenal and Tottenham Hotspur is one such derby in England. The match is considered to be one of the top matches in the Premier League and will attract much attention this season.

Arsenal made a flying start to the season, winning their opening five matches to go atop the table. However, they incurred their first loss against a rejuvenated Manchester United. After that, however, normal service resumed for the team as they battered Brentford 3-0. Mikel Arteta needs a win as Pep Guardiola’s Manchester City trail them by one point.

On the other hand, Tottenham have also made a solid start to the season and have remained undefeated. Before the international break, their only area of concern was the form of Son Heung min. However, the Korean announced his return to form in style by scoring a 13-minute hattrick against Leicester. The team are currently in third and, just like City, are just a point behind Arsenal.

The team winning the match will be the top-placed team which shows how important the game is. It is also the first time that these two teams will be meeting in a top-of-the-table clash.

The Gunners have had a double injury blow in recent weeks. First, Oleksandr Zinchenko suffered an injury which might put him out of the Tottenham match. In addition, Mohamed Elneny and Thomas Partey have also sustained injuries. However, Partey is racing against time to be fit for the clash. Elsewhere, Arsenal have a fit squad to choose from. The team will be hoping their attacking triumvirate of Jesus, Martin Odegaard, and Bukayo Saka continue to fire, earning them first place. ‘

For Tottenham, Antonio Conte could not have hoped for better news from the medical team. Barring Lucas Moura, the team has no other injuries, which will be music to Conte’s ears. Furthermore, Son-Seung Min has also returned to form, which makes Tottenham’s attack one of the best in the Premier League. Moreover, Ivan Perisic and winter transfer window signing Dejan Kulusevski look like solid players.

And Conte’s tactics have also transformed them defensively and made them almost a complete team.

Miedema: Tottenham derby days like this are why I stayed at Arsenal

🗣️ "I’ve always said the English league is the best, so that really helped in my decision. In the end, you play for the big games/big moments so if 50,000 people are at the game vs Spurs, that’s one of them." pic.twitter.com/f9O7gqbmbq

For Arsenal, perhaps there has been no player better than Gabriel Jesus. The Brazilian has already scored four goals and is the focal point of the Gunners’ attack. And he has been ably supported by Odegaard, Saka and Martinelli. The four-person attack has helped Arsenal establish dominance across several matches. Furthermore, William Saliba has also formed a solid defensive partnership with Gabriel. This, combined with Aaron Ramsdale’s heroic goal-keeping, has made Arsenal a Premier League contender.

Tottenham have depended on the duo of Harry Kane and Son Heung-Min for years. And while the two are still present, they now have a brilliant star cast to support them. And one of them is Dejan Kulusevski. The Swede has hit the ground running since joining Tottenham. Another new star has been Eric Dier, who feels finally at home in the centre of Tottenham’s defence.

Over the years, the North London derby has given us some brilliant matches, and this looks to be as exciting as the previous ones. Conte and Arteta are two brilliant tacticians who will demand nothing short of victory from their teams. Both the teams are currently on top of their form and have two brilliant attacks. However, home form is always crucial in such matches, giving Arsenal the upper hand.

FootTheBall predicts a 3-1 win for Arsenal.