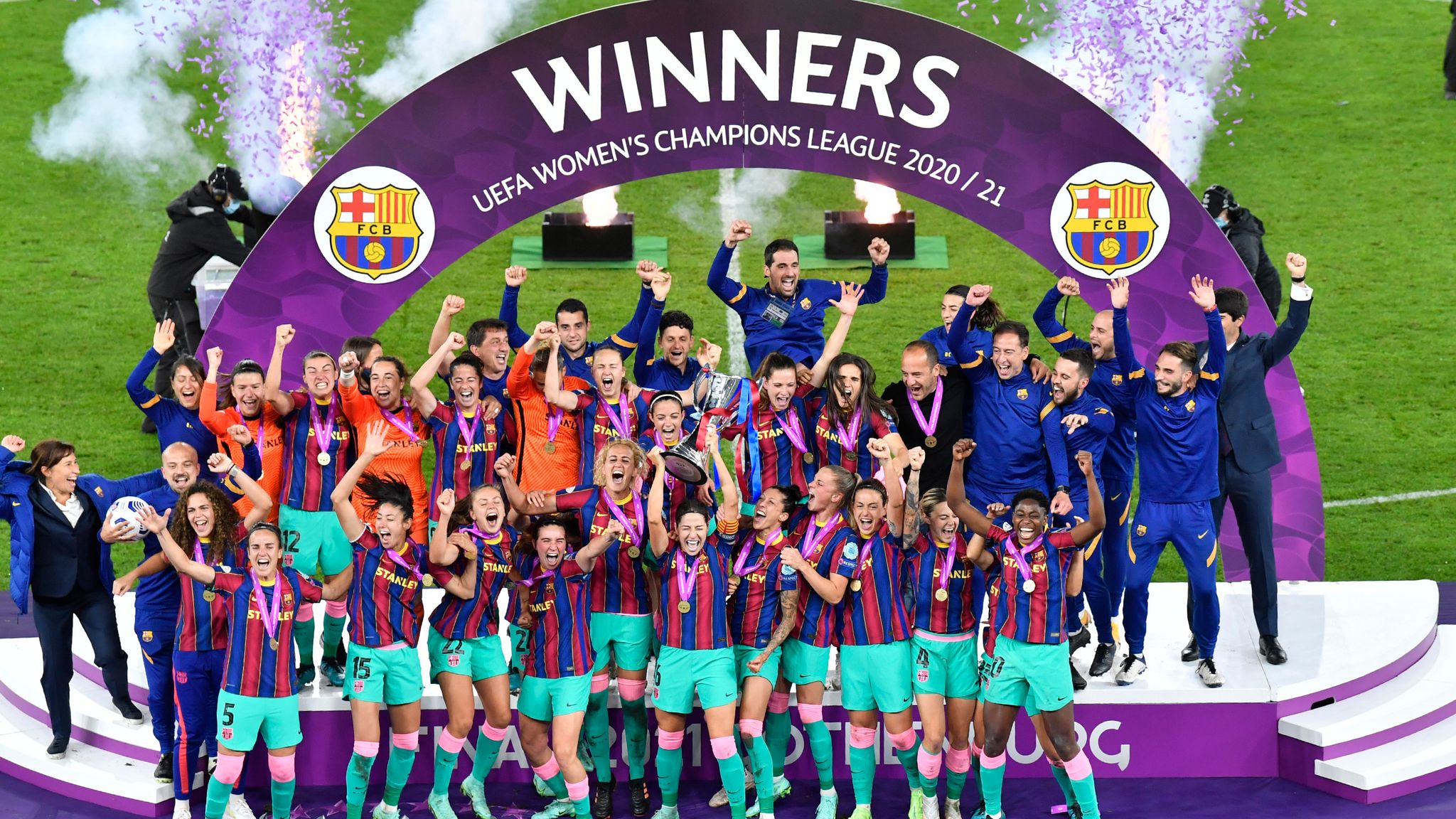 The 2020/2021 season has come to an end and it has been another remarkable year of progress for women’s football. FC Barcelona Femeni have created history by winning the treble in Europe.

We at FootTheBall have gathered the details of all the top women’s leagues and cups and their winners.

FC Barcelona Femeni have won their first-ever Women’s Champions League as they brushed aside Chelsea FC Women 4-0. The Blaugrana who made their second final appearance defeated the first time finalists Chelsea.

Barcelona became the first team to win both the men’s and women’s Champions League titles. Barcelona Femeni also completed a historic treble as they won the Primera Divison along with Copa de la Reina.

FC Barcelona Femeni have succesfully defended the Primera Divison Femenina title. Lluis Cortes’s side finished the league with 84 points and 17 clear of arch-rivals Real Madrid. The Catalans have become the women’s league winners for the sixth time.

They finished a historic treble after a 4-2 victory over Levante in the Copa de la Reina final. Their star player Alexia Putellas was pulling strings and scoring goals left right and centre in the historic campaign.

Chelsea Women were crowned the 10th Women’s Super Leagues winners and became the record titleholders with four titles to their name. Emma Hayes’s Londoners won the league with 57 points just 2 points ahead of Manchester City.

The Blues also had a dream run in the Champions League and were cruelly beaten by Barcelona Femeni in the finals.

The cup competition is currently in its quarter-final stage. Due to government restrictions, the tournament was suspended from January to March. the quarters and subsequent stages of 2020/2021 would be played in the first part 2021/2022 season. Defending champions Manchester City kick-off against Leicester City on September 29th to resume the tournament.

Who will win the 🏆 this year? pic.twitter.com/jTfN2yzNtG

The final is scheduled for 5th December of this year at Wembley.

The title race in France went right down to the wire in the women’s league just like the men’s league. Paris Saint Germain won the league for the first time in their history. They finished the league with 62 points just a single point above the defending champions Lyon.

PSG went into the final matchday against Dijon knowing a win would seal their first-ever league title. They won the game 3-0 to secure the title without any fuss and deny Lyon yet another title.

The pandemic has forced the French football federation to choose a new format. Under the new format, 112 amateur teams compete for the 10 spots available in the round of 16. The remaining spots are filled by 12 professional teams in Division 1 after playing a one-off qualifier amongst themselves.

Currently, all 16 spots are fixed and we are waiting for the further stages of the tournament to kickoff.

The women’s Bundesliga had an exciting title race unlike the men’s league this time. Bayern Munich held a two-point advantage over the defending champions Wolfsburg ahead of the final matchday.

Bayern thrashed Frankfurt 4-0 on the final day to win their third league title. Wolfsburg destroyed Bremen 8-0 and prayed for a miracle that never happened in the hope of lifting their seventh league title.

Wolfsburg won the cup after a 1-0 win in the extra time against Frankfurt. Ewa Pajor the Polish striker scored the winning goal for Wolfsburg as they enjoyed cup success for the eighth time.

Wolfsburg are now just one title behind FFC Frankfurt who have merged with Eintracht Frankfurt this season.

Juventus have won the league comfortably as they finished the league with 66 points, 15 ahead of second-placed Milan. The old lady’s women’s side has won the title, unlike their men’s side who have failed to win the league for the first time in 10 years.

This triumph means that Juventus have now won the league for four successive years since 2017. They have four titles to their name now and are going for Torres Calcio’s record of seven titles.

Roma won their first-ever Coppa Italia as they defeated Milan 3-1 on penalties as the game ended 0-0 after 120 minutes of football. The capital side was overjoyed by their triumph in the cup competition.