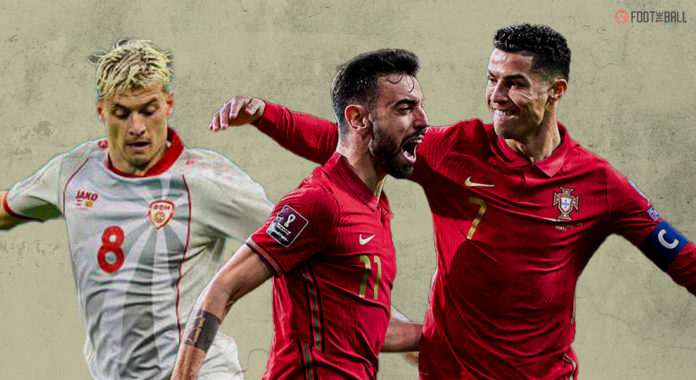 Portugal booked their spot in the 2022 Qatar World Cup with a comprehensive 2-0 win over North Macedonia in the playoff final thanks to a Bruno Fernandes brace.

The game, predictably, got off to a slow start. North Macedonia were more than happy to relinquish the ball to Portugal and sit deep. The strategy had worked for them against Italy last Thursday and from the off, they were not looking to do anything different.

It took a while for Portugal to truly trouble the visitors goal but they had two good chances in quick succession after a quarter of an hour played. The first fell to Bruno Fernandes who headed off target from a difficult Joao Cancelo cross. The second was a much easier chance, falling to Cristiano Ronaldo after a delightful pass by Diogo Jota but the superstar’s attempt was wide.

10 minutes later, it was Jota who should have done better. Bruno swung in a corner that found the Liverpool man free at the back post but his firm header bounced over the crossbar. North Macedonia attempted to hit the Portuguese on the counter but to little success.

The underdogs had themselves to blame for the opener with just over half an hour played. Right-back Stefan Ristovski played a poorly thought out cross-field pass that was intercepted by Bruno. The attacking midfielder exchanged passes with Manchester United teammate Ronaldo before finishing with aplomb.

The goal settled the nerves of the hosts and they nearly doubled their lead before the break, with the chance coming from another poor defensive decision. Pepe played a ball over the top to Ronaldo whose cutback was poor. Macedonia though failed to clear and it fell to Jota who couldn’t find the gaping target form a narrow angle.

Which side has impressed most so far? 🤩#WCQ

The visitors started the second half with a much more positive outlook given the goal they had to chase and made things slightly uncomfortable for Portugal. They were unable to create clear-cut chances despite having more possession in better areas.

Hopes of a comeback were sniffed out in the 66th minute, Bruno Fernandes proving to be Macedonia’s undoing again. Portugal broke quickly and Jota was afforded far too much space to clip in a cross from the left for Bruno. The Manchester United man made no mistake, smashing in a confident first time finish.

The second goal deflated Macedonia and Portugal looked the more likely side to add to the scoresheet. They broke multiple times threateningly but the third goal did not come. Macedonia had a couple of half-hearted penalty shouts but there was no consolation for them either.

Portugal saw out the game with ease and they can get on to booking their tickets to Qatar for the World Cup later this year. Here are our key takeaways from the match –

Fernando Santos had a host of absentees for the semi-final playoff against Turkey but against North Macedonia, the Selecao were close to full strength. Pepe returned from sickness to replace Jose Fonte, Joao Cancelo returned from suspension to replace Diogo Dalot and Nuno Mendes came in for Raphael Guerreiro. Rueben Dias was the only big name missing.

And the difference was visible. Against Turkey they were timid and iffy but on Tuesday night Portugal were professional and exciting. It all clicked into place for Santos’ side when it mattered and they will be looking forward to continue this vein of form in Qatar.

Portugal have had considerable success in recent years, especially relative to their past history. However, this has not exactly come with an expansive or joyful style of football. Their Euro 2016 triumph is often dismissed as a park the bus win but Santos has shown that his side can do more than defend.

A midfield of Joao Moutinho, Bernardo Silva and Bruno Fernandes is by no means a defensive one. Combine that with the exciting wide forwards in Diogo Jota, Joao Felix, Rafael Leao and Otavio, and you have a very serious attacking lineup. Ronaldo though sticks out as a sore thumb, and his performances over the last two matches have not been encouraging. Decisions to make for Santos before winter rolls around.

North Macedonia might not be going to the world cup but they have impressed plenty of watchers over the past year or so. They qualified for the Euros for the first time in their history last summer and came as close as they could to making an appearance on the biggest stage of them all.

The core of the side is still either entering or in their prime. Their manager is dedicated and tactically astute. Things are looking up for this fledgling footballing nation.