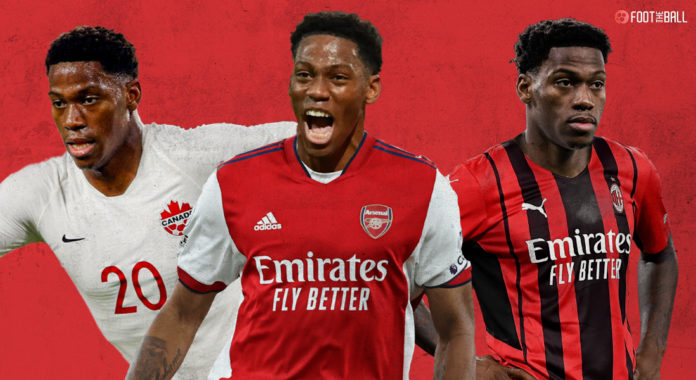 The FIFA World Cup is the competition where dreams come true. Players and nations have the chance to make history. Indeed, there are players for whom this could be the final time at this stage. For Qatar 2022, there has already been one big generational news.

Canada have qualified for the showpiece event for the first time since 1986. A new golden generation of young stars has been integral to success.

Also read: Canadian football storming back on the international scene with Golden Generation

WE ARE CANADA! 🍁 WE ARE GOING TO QATAR!#CANMNT #ForCanada #WCQ pic.twitter.com/j6hZYGETak

Les Rouges are heading to Qatar and few would bet against them making a big splash. One of the stars of the show has been Lille attacker Jonathan David. The 22-year-old has scored 20 goals in 29 caps. David has been on fire during the qualifying campaign with 14 goal contributions (nine goals, five assists).

He was one of the key assets as Lille won Ligue 1 last season (13 goals, two assists), and has already reached that scoring mark.

Needless to say, there will be some serious interest in David after the end of the season. Several European clubs could do with a striker of his abilities but not every destination is equal. Therefore, any decision will have to be well thought out by the young forward at this stage of his career.

David had always been focused on playing European football and took the first step in that regard in 2018. He signed with Belgian side Gent and would go on to stay for two years. David scored 37 times from 83 games across all competitions during this period, attracting some heavy interest.

20 years of age. One of the best players in Belgium. Already on the radar of Tottenham, Ajax, Borussia Dortmund, Inter & Arsenal. Huge future ahead. pic.twitter.com/Xhnwyq1b28

There were as many as 10 clubs interested in buying the striker who eventually joined Lille. Les Dogues had just sold Victor Osimhen, their leading scorer in 2019-20 to Napoli, and paid €30m. David had a tough start to life in France, netting just twice in the league that year.

However, he would become an entirely different proposition once 2021 rolled around. David scored 11 goals in the final half of the season as Lille went on to win the title.

David had helped in defeating PSG in April, scoring the lone goal in a 1-0 away win, Lille’s first against the Parisians since 1996. He had offers to leave Lille in the winter transfer window this year but chose to finish the season.

Now, there are even more clubs going after him but every destination is not equal. FootTheBall lists five ideal landing spots for the Canadian ace.

The Gunners will be one of the most active clubs in terms of signing a forward. Alexandre Lacazette is out of contract while Eddie Nketiah is not up to the mark yet. Mikel Arteta will have a lot of options to choose from this summer. One of the most sought-after, alongside Darwin Nunez, will be Jonathan David.

The Lille forward will follow in the likes of Lacazette and Pierre-Emerick Aubameyang, both of whom have played in France. He is young so fits the profile of the team Arteta is building. Martin Odegaard, Bukayo Saka, Emile Smith Rowe, Gabriel Martinelli all point to a particular direction the Gunners are moving in.

David will benefit from quick runners alongside him while he is also adept at playing across the front line. Moreover, he will immediately become first-choice and start in the majority of games, underlining the faith in him.

The Rossoneri are challenging for the Serie A title after a long time. Sporting director Paolo Maldini has done a terrific job in slashing the wage bill and acting prudently. However, the attacking options do remain a bit thin. Zlatan Ibrahimovic and Olivier Giroud have a combined age of 75 years.

Jonathan David will be a perfect transfer for Milan in forming a deadly partnership with former Lille attacker Rafael Leao. He is quick on his feet, has loads of technical skills, and can play out wide. The main issue could be the transfer fee, though the allure of Milan will be strong.

📰 #Gazzetta: Jonathan David (Lille) and Alexander Isak (Real Sociedad) both have the profile of a #Milan striker. pic.twitter.com/J8us6ZbWJj

They also have a young team with fast players who can complement David well. The trio of Leao, David, and Brahim Diaz will be more than a match for any opponent on their day.

Antonio Conte is overseeing an overhaul at Spurs already. The January transfer window was immense with Dele Alli and Giovani Lo Celso leaving (loan). The club brought in Dejan Kulusevski and Rodrigo Bentancur who have become immediate starters. However, the major question has remained surrounding the future of Harry Kane.

🧩David's goalscoring abilities have captured the attention of several including Spurs this window.

He came close to leaving last season and could be finally on his way out this time. If he does, Jonathan David will be a superb fit. He is young, can linkup up excellently with Son Heung-Min and Kulusevski, and score in double digits.

Conte will love developing a fresh talent who can inject a lot of impetus. Spurs have some youth products, including Dane Scarlett and Alfie Devine.

However, their promotion will not turn them into regular starters. The transfer cost will not be an issue if Kane leaves while even without that, Daniel Levy should go after him.

There are not one, but two reasons for the transfer of Jonathan David to the Allianz Arena. Firstly, there are some strong rumors that Robert Lewandowski could be leaving after this season. The Polish talisman has been an ever-present for the Bavarians for almost a decade. Lewandowski has won every trophy at the club level except the Ballon d’Or, though this year will be another good chance.

The second reason is that David’s good friend and national teammate Alphonso Davies. The wingback can persuade David to join the Bavarians, where he will be a good fit either way. If Lewandowski stays, the Canadian can become an understudy before eventually taking his place.

If Lewandowski leaves, David becomes first-choice. His ability to play down the flanks will also come in handy in the future, given the number of matches Bayern play.

The Red Devils find themselves in a similar boat to Milan. Their two forwards have a combined age of 72 years. Edinson Cavani is certainly leaving after enduring an injury-hit season. Cristiano Ronaldo should stay but is said to be frustrated at the club’s poor campaign. Jonathan David will be a solid fit and can make the right flank his own too.

United do not currently have an explosive player there. The new-look front three of Ronaldo, David, and Jadon Sancho will instantly become one of the best. The Canadian also plays through the middle in the absence of the Portuguese. However, the transfer of Jonathan David will depend on who the next manager is. Erik ten Hag looks the favorite right now.

Nevertheless, when it comes to any off-field decision taken by the club, nobody can be sure until the final moment.