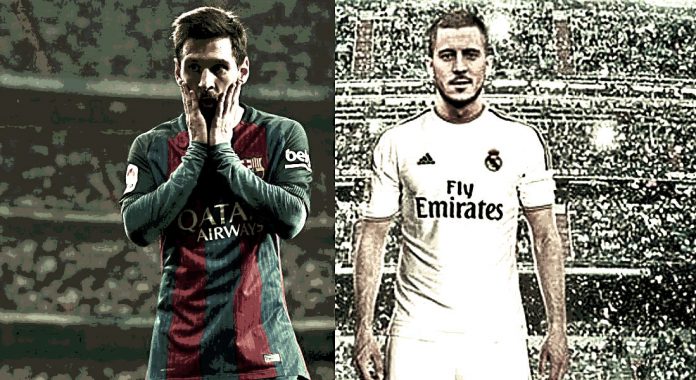 Barcelona superstar Lionel Messi has been reportedly informed that Real Madrid are edging nearer to complete the signing Chelsea forward Eden Hazard at the end of the season.

But now, Hazard’s future at Chelsea is in doubt with both Real Madrid and Barcelona reportedly at loggerheads to secure the signatures of the Belgian.

Barcelona have also reportedly joined the race to sign Hazard with the Catalan giants having the financial muscle to seal the deal especially after receiving the £200million from Neymar’s sale to PSG back in the summer.

But Spanish website Don Balon claim that Lionel Messi has been told that Hazard prefers a move to Real Madrid at the end of the season as the Belgian has always dreamt of playing under Zinedine Zidane.

And Zidane wants to add more creativity to his squad by bringing the Belgian at the Bernabeu.

And the Real Madrid bosses believe that they can tempt Chelsea to sell Hazard by launching a £90million bid for the 26-year-old.

Real Madrid could also offer Bale as part of any deal to seal the signing of Hazard.